Riviera has a new president and big events headed its way 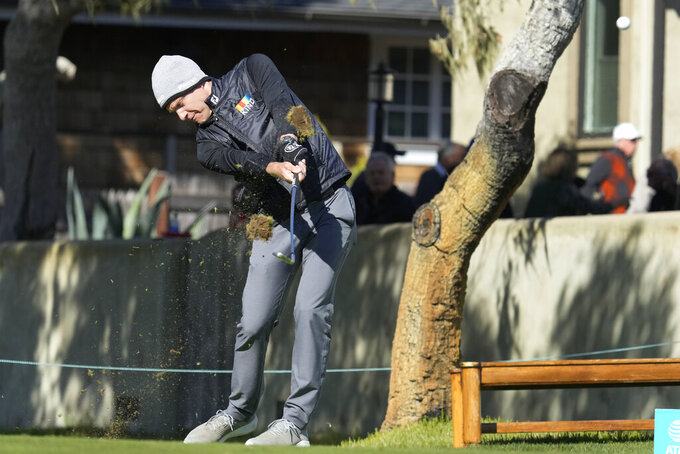 LOS ANGELES (AP) — Megan Watanabe first showed up at Riviera when her family bought the club in 1989. She took golf lessons and tennis lessons in the summer, left Japan to attend middle school and eventually went to Pepperdine to study art.

She never imagined where it would lead.

Watanabe is the first woman to be president of the fabled club. And while Riviera already is regarded as among the best courses on the PGA Tour, it’s about to get a lot more traffic.

Riviera celebrates its 100th anniversary in 2026 by hosting the U.S. Women’s Open, its first women’s championship. Golf has been confirmed for the Olympics program for Los Angeles in 2028 and will be played at Riviera.

“We’ve always sought majors,” said Watanabe, who spent 10 years as vice president before taking over from her father, Noboru. “In 2017, we had the U.S. Amateur and we continued to look for opportunities. We haven’t had the U.S. Open since 1948.”

She said John Bodenhamer, the chief championships officer for the USGA, mentioned changes coming to the U.S. Women’s Open with a big boost in purses and going to more historic clubs.

“The things he talked about really interested me,” Watanabe said. “Because we have never hosted a women’s championship, it made sense. Also for the Olympics. I wanted the women to be comfortable and experience Riviera before the Olympics.”

Since that 1948 U.S. Open won by Ben Hogan, Riviera has hosted the PGA Championship twice and a U.S. Senior Open.

Watanabe has not ruled out another U.S. Open, which would seem like a long shot with the limited property at Riviera for the massive build-out the championship requires.

Riviera was on the verge of hosting the U.S. Open in December 2020 with no fans during the peak of the pandemic until the British Open was postponed and the U.S. Open moved from June to September and stayed at Winged Foot.

Next year, the U.S. Open goes down the road from Riviera to Los Angeles Country Club, which has 36 holes and ample room. Watanabe preferred a comparison on the other side of the country. Merion had the 2013 U.S. Open and will host again in 2030 and 2050.

“Merion is probably about the same size we are. My thinking is if they can do it, I think we can do it,” she said. “Yes, parking is always an issue. If we can have extra property to put in a merchandise tent and corporate tents, it would be great. At the same time, I would pitch a smaller, premium-sized U.S. Open. That might work. That’s what we do well here.”

Tiger Woods and Phil Mickelson were part of the first Ryder Cup committee that came out of the infamous task force following the 2014 matches. Woods has been among the three players on the six-member committee ever since as part of a veteran crew.

Now the committee is going younger.

Thomas, who has played on the last two teams, said he was surprised to be approached and felt it was an honor.

“I feel like it's important to me,” he said. “I hope to be playing the Ryder Cup the next 20 years. At least if I'm not playing, which I hope to be, I want to be part of it somehow to help us win.”

Spieth has played every Ryder Cup since Gleneagles in 2014.

“Very excited,” Spieth said. “The job is mainly more helping to pick the captain, talk about the players' experience on and off the golf course, how it can be improved, what frees us up to play our best golf. It was nice having the last Ryder Cup, being on the side of knowing what was successful. I think I can provide useful input having been on four teams.”

Spieth said the first meeting was two weeks ago during the AT&T Pebble Beach Pro-Am.

“A lot of them were asking questions to me and Justin,” he said. “The cool part about it was the questions they asked of us, and we were blatantly honest, from clothes we were wearing to ceremonies to how many dinners we're doing, what kind of recovery tools and methods we had and access to that. It was a good start.”

Tucked away in the annual media guide for the Masters were a few changes to Augusta National that will add 35 yards to the card, extending the course to 7,510 yards.

The club said the par-4 11th hole has a tee that has been moved back 15 yards and to the left, making it play 520 yards. The fairway has been recontoured and several trees have been removed on the right side.

The par-5 15th hole has a new tee 20 yards back with the fairway recontoured.

That means the par-4 11th will play longer than the par-5 13th, which remains unchanged at 510 yards. There has been speculation the 13th would be lengthened after Augusta National purchased acreage behind it at Augusta Country Club.

But while the 11th is longer, Rory McIlroy says that doesn't mean it will be harder.

“I do know they've taken the tee back and to the left, so it's more of a straighter tee shot than a dogleg right,” he said. “They've widened the fairway and taken a lot of trees out. Even though it's a longer hole, they made the tee shot and the second shot a touch easier.”

He thought the bigger change was a steeper depression to the right of the green, meaning players missing there will be a few feet lower than the putting surface.

“It will make it trickier,” he said.

Asked if he was happy the 13th wasn't changed, McIlroy smiled and said, “I'd be happy if they left everything alone.”

The players have spoken and Webb Simpson and Peter Malnati were voted co-chairs of the Players Advisory Council, which advises and consults the PGA Tour board of directors on tour issues.

They were elected over Patrick Cantlay and Billy Horschel, and they will join the board next year to serve three-year terms.

“I feel like these are important times on the tour and I care a lot about the direction of the tour,” Malnati said. “We're making decisions that are affecting the direction of the PGA Tour for decades. I want to have a seat in that room. I was thrilled that enough of my peers wanted me to be there, as well.”

Riviera was the choice for golf in the Olympics. The first step was making sure the Olympics wanted golf.

The International Olympic Committee announced ahead of the Beijing Games that golf will be part of the 2028 program. Among the guests at the Genesis Invitational was Antony Scanlon, executive director of the International Golf Federation.

The next question for 2028 is whether Riviera will host two tournaments in one year.

LA's PGA Tour event was held at Valencia in 1998 when Riviera had the U.S. Senior Open. The Los Angeles Open went to Rancho Park in 1983 as Riviera prepared for the PGA Championship. But the PGA Tour and a major were held the same year at Riviera in 1948 (U.S. Open) and 1995 (PGA Championship).

The bigger question is whether golf can expand its format to include a mixed-team event. The IOC did not want any changes for Paris in 2024. Los Angeles would be the next chance.

Already in the World Golf Hall of Fame, Juli Inkster picked up another big honor when she was chosen to receive the Bob Jones Award, the highest honor from the USGA recognizing character, respect and sportsmanship. ... David Feherty will host the induction ceremony at the World Golf Hall of Fame the week of The Players Championship. The inductees are Tiger Woods, Susie Maxwell Berning, Tim Finchem and the late Marion Hollins. ... Stu Francis finishes his third and final year as president of the USGA. Fred Perpall was confirmed as president-elect at the annual meeting, meaning next year he will be the first Black president of the USGA since it was founded in 1894.

Jon Rahm had a 73 in the second round at Riviera, ending his streak of 34 consecutive rounds at par or better on the PGA Tour dating to his 71 in the first round at the British Open. During his streak, he had three rounds over par in Spain on the European Tour.

“I can't wait two or three years. I got to do it fairly soon.” — Bernhard Langer, 64, on trying to break Hale Irwin's record of 45 wins on the PGA Tour Champions. He won the Chubb Classic for his 43rd title.