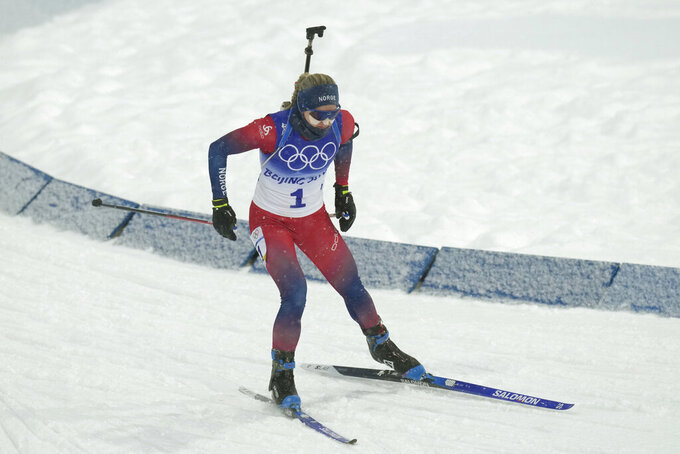 Unsurprisingly, the gold medalists were the sharpest shooters.

Marte Olsbu Roeiseland of Norway missed only one of her standing targets to win the 10-kilometer pursuit race, while Quentin Fillon Maillet of France hit all 20 for his second gold medal of the Beijing Olympics in the 12.5-kilometer race.

It was Roeiseland's third gold medal and fourth medal overall since arriving in China.

“I had one mistake in the first standing, so in the last standing I was really focused about the targets going down," the Norwegian said. “It’s hard. It’s snowing and it’s not so easy to ski but I had amazing skis and they helped me a lot.”

Roeiseland started the race with a lead because of her win in the sprint race and held her focus throughout. She crossed the finish line in 34 minutes, 46.9 seconds.

Elvira Oeberg of Sweden, who was second in the sprint race and started 31 seconds behind Roeiseland, had three misses in her second and third shooting bouts, but cleaned the last standing to finish 1:36.5 behind for silver.

“After two mistakes in the first standing I wasn’t feeling that confident anymore," Oeberg said. "I felt that I screwed up my chance at a medal today but I also felt that there is a chance in the final standing. I’m just so happy that I managed to keep it together.”

Tiril Eckhoff of Norway also missed three targets but came in 1:48.7 behind her teammate for the bronze medal. She also won bronze in the mass start races in Sochi and Pyeongchang.

“The conditions were very heavy. There was a lot of snow, and a lot of slow snow. It was a tough race," Eckhoff said. “I never gave up, that’s my motto.”

Roeiseland previously won gold in the mixed relay as well as the sprint. She also won bronze in the individual race. In her first Olympic appearance, Oeberg has won two silver medals. Eckhoff earned her first medal of the Beijing Games.

In the men’s race, Fillon Maillet started 26 seconds behind Johannes Tingnes Boe of Norway, who had won the sprint race the day before, but it was his shooting that won the day.

“I’m so proud of myself because today, the conditions were so hard — windy, snowing,” Fillon Maillet said. “It was a very, very hard fight during all the race.”

It was the Frenchman's second Olympic gold, and fourth medal overall. He won gold in the individual race and silver in the mixed relay and the sprint.

Boe had started off first but missed seven targets, falling back to fifth place, 2:13.7 behind Fillon Maillet.

“It was a tough race on the track with the snow," Boe said. "It felt like a big fight, and tricky conditions on the range as well. You had wind, tired legs, tired minds and hearts beating. It was not easy.”

Tarjei Boe was second in the sprint and went off second. He missed only one target in the pursuit and finished 28.6 seconds behind the Frenchman for his second silver medal of the Beijing Games.

“Trying to hit those targets in these conditions is tough, but for me it was a good day," Tarjei Boe said. "I was lucky the conditions were hard because it was my way of getting onto the podium.”

Eduard Latypov of the Russian team also only missed one target and won bronze, 35.3 seconds behind.

Only one other biathlete shot clean in the race — Lukas Hofer of Italy. He finished fourth, 51.1 seconds behind the winner.