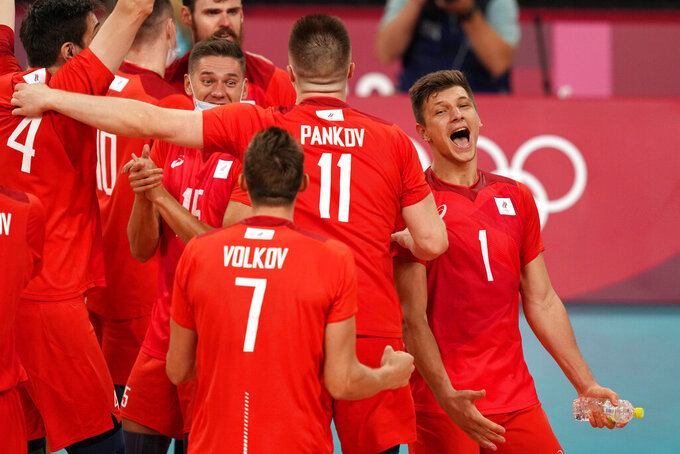 TOKYO (AP) — The focus for the Russian men's volleyball team had started to shift to the fourth set of the semifinals when it fell behind by a big deficit to powerhouse Brazil in set three.

That ended up relaxing the players and led to an epic third-set comeback that sent them into the gold medal match.

The Russians rallied from eight points down to win the third set and went on to deny Brazil its fifth consecutive trip to the gold medal game with an 18-25, 25-21, 26-24, 25-23 victory on Thursday.

“The third set is some kind of miracle,” Russian team coach Tuomas Sammelvuo said. “It shouldn't be possible. ... They have very experienced players to play these kind of games. When you win the third set like this, you’ve got a huge amount of confidence and mental energy and there’s nothing that can stop you after.”

The Russians will play France for the gold medal on Saturday. The French swept Argentina 25-22, 25-19, 25-22 in its first Olympic semifinal appearance ever.

Brazil will play Argentina for the bronze after failing to make it to the gold medal game for the first time since 2000.

“We lost some points because their attack was very strong,” Brazil captain Bruno said through an interpreter. “We didn't block well and made some mistakes. ... Now we'll fight for the bronze.”

This marked the third straight Olympics that Brazil faced a team from Russia in the medal round, with the Russians winning the gold medal match in five sets at the 2012 London Games and the Brazilians sweeping the semifinal on the way to gold at home in Rio de Janeiro in 2016.

These countries have dominated the Olympics in recent years, with the Russians making the semifinals in seven straight Olympics and the Brazilians making the previous four finals.

Brazil took the first set 25-18 thanks to a strong blocking defense up front led by the masked middle blocker Lucas Saatkamp, known by Brazilians as Lucão.

The Russians did a much better job on the attack in the second set and won it 25-21 on a spike by Egor Kliuka. That led to some heated talk among the Brazilian players between sets as they tried to regroup.

It seemed to work as Brazil went up 20-12 in the third set before the Russians rallied. Back-to-back blocks by Ivan Iakolev tied the set at 23 and then Ilyas Kurkaev ended it at the net on the Russians' second set point.

“The third set was something,” Sammelvuo said. “I think everybody just relaxed on the court. We just played and then point by point we came back and saw there was a chance. Everyone was focused on the next set, so we wanted to rest some players. ... We had patience and heart in the crucial moments.”

The Russians played from ahead in the fourth set thanks to a string of four service errors on five attempts by Brazil. They then closed it out on an attack point from Kliuka and started celebrating, with some players falling to their knees in disbelief.

While the first semifinal featured two of the sports' heavyweights, the teams in the second matchup didn't have the same kind of pedigree.

France had never made it this far in four previous Olympic trips but is on a good run after losing three of five matches in pool play, including a five-setter to Argentina.

The French beat Pool A winner Poland in five sets in the quarterfinals and now is assured its first medal in volleyball after winning the rematch against Argentina.

“After the first game against Argentina we were not sure we'd make it out of the groups,” middle blocker Barthelemy Chinenyeze said. “Now we’re here in the finals with one match to go. It's incredible. I can’t believe it. ... It’s just an incredible story for our team that’s been all together since 2012.”

Argentina has won only one medal in the sport, a bronze in 1988 against Brazil, and made its only other semifinal appearance in 2000.

The French were in control for most of the match against Argentina, winning the first set 25-22 when Chinenyeze's block capped a long rally on set point.

France kept up its strong play at the net in the final two sets and rolled to the victory on Earvin Ngapeth's point at the net. A frustrated Argentine player then kicked the ball high into the mostly empty stands as the French celebrated.

Now they get to play the Russians for the gold after beating them already in group stage.

“I think it will be a completely new game,” Chinenyeze said. “We’ll give it our all on the court and we’ll see.”

The women's semifinals will be held Friday, with the United States taking on Serbia in a rematch from the 2016 semifinals that the Americans lost, and undefeated Brazil facing South Korea.