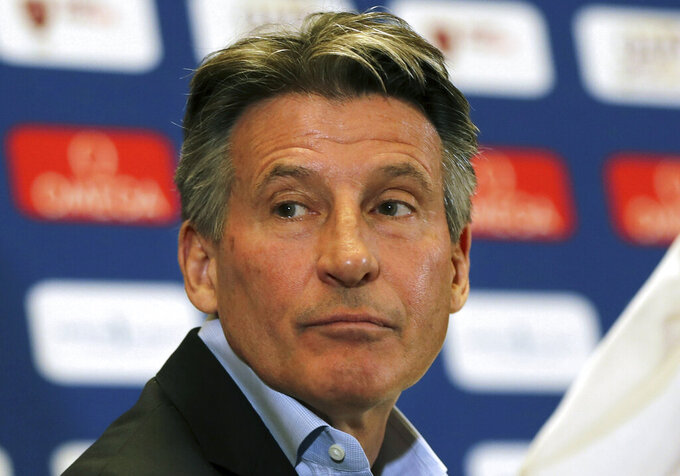 LONDON (AP) — Sports federations have set precedents by banning Russian and Belarusian athletes from competition following the invasion of Ukraine and they must remain firm to keep them in place, Olympic great Sebastian Coe said Monday.

Coe is a two-time Olympic champion runner from Britain who is now the president of World Athletics, the governing body of track and field. He spoke four days before the start of the world indoor championships. Both Russians and Belarusians have been excluded from that event, which will be held in Serbia.

“There’s not a single sports federation out there that naturally wants to exclude teams or individuals. That’s not something that we came into the sport for,” Coe said during a video conference call. “But I think we have to recognize that this is such a game changer. And, yes, it will set precedents.”

Athletes and teams from Russia and Belarus have been kicked out of dozens of sports since Russian forces invaded Ukraine last month, with some soldiers entering via Belarus. The biggest events to be immediately impacted by the decision to ban Russians and Belarusians include the upcoming track championships, the figure skating world championships and soccer.

The bans from soccer, which include the Russian national team from World Cup qualifying and Russian club Spartak Moscow from the Europa League competition, have been challenged by the Football Union of Russia. The first appeal rulings are expected this week from the Court of Arbitration for Sport — the highest sports court in the world.

“We absolutely accept that this will set precedents and those precedents will have to be faced individually and sequentially and they will be with us for years," Coe said. "We haven’t made this easy on ourselves but it is still the right decision.

“You cannot have aggressor nations, where you have so altered the landscape for the integrity of competition being untouched, while the actions of their governments have so influenced the integrity of sport elsewhere.”

Russia’s opponent in the World Cup qualifying playoffs, Poland, has said it won’t play against the country on March 24. The two next possible opponents, the Czech Republic and Sweden, have said the same.

Track and field had previously been the hardest on Russians following the country's state-sponsored doping scandal dating back to the 2014 Winter Olympics in Sochi. Russians now have to be individually vetted in order to compete in international track events. The Russian track federation has been banned since 2015.

“I don’t have a problem with (banning Russians) because that’s what we’ve done in our sport. I don’t see why that should be different in any other sport if you’re making that judgement on the integrity of the sport,” Coe said. “Goodness me, in football, you’ve already seen teams that decided they’re not going to play in playoff rounds.

“The impact is across the board. So they are going to need to remain really firm on this and do exactly what we’ve done.”