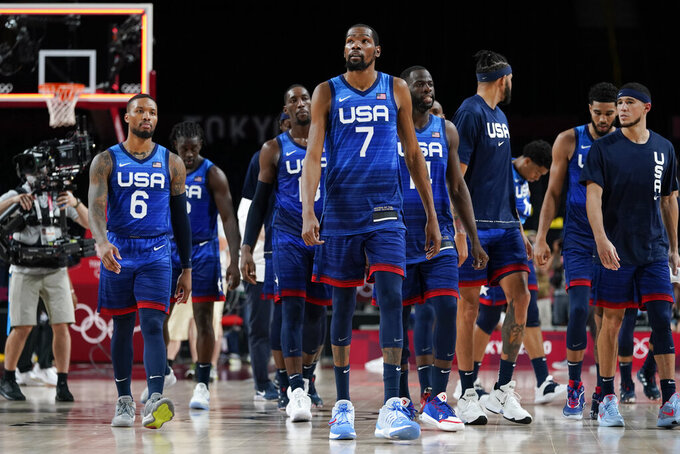 United States' Kevin Durant (7) walks off the court with teammates after a men's basketball preliminary round game against France at the 2020 Summer Olympics, Sunday, July 25, 2021, in Saitama, Japan. France won 83-76. (AP Photo/Charlie Neibergall)

SAITAMA, Japan (AP) — The soundtrack of the NBA a generation ago has made its way to the Tokyo Olympics.

“Roundball Rock” — the iconic score composed by John Tesh about three decades ago — is being utilized again by NBC at the Tokyo Games, as the theme music for men’s and women’s basketball on their broadcasts.

Tesh’s music was the theme for the “NBA on NBC” coverage from 1990 through 2002, spanning parts of the careers of Michael Jordan, Kobe Bryant, Shaquille O'Neal and many others. The music started being used again on the Olympic basketball telecasts on NBC’s networks over the weekend.

Tesh once said that he came up with the theme on a trip to Europe but didn’t have a piano available to him on the trip. He called his home answering machine and sang the idea for the theme into the phone, leaving the message to himself.

It was even parodied on NBC’s “Saturday Night Live” in 2013 in a skit featuring, among others, Jason Sudeikis — who now stars in “Ted Lasso."