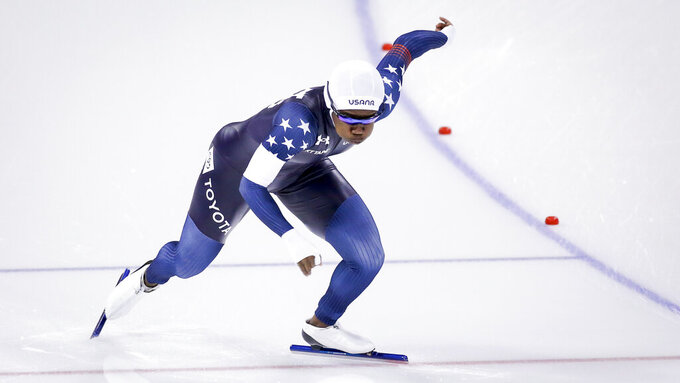 MILWAUKEE (AP) — Erin Jackson slipped in the 500 meters and stunningly finished third, failing to make the Beijing Olympics in her signature event Friday at the U.S. speedskating trials.

She had hoped to be given a re-skate, but the rule only allows for re-skates if there is mechanical failure or a fall. Her only chance of getting into the event would be if one of the top two qualifiers give up their spot.

“I messed up, it’s definitely on me,” Jackson said in an interview on USA Network, “but it would be nice to get that re-skate.”

Jackson, the first Black woman to win a World Cup event when she won in Poland in November, bobbled in the second straightaway of the sprint at the Pettit National Ice Center. Her time of 38.24 seconds put her second going into the final pairing.

Jackson would be a gold-medal favorite in Beijing. She's ranked No. 1 in the world in the 500, having won four of eight World Cup races this season. She also had a second and a third.

“The rules are you have to fall to get a re-skate," she said. “In the 500 even a stumble is enough to take you out of it. Maybe I should have sat down.”

Her time wasn't fast enough to hold on. Kimi Goetz knocked out Jackson by taking second in 37.86. Brittany Bowe won in 37.81.

Bowe and Goetz already qualified for Beijing by finishing first and second in the 1,000 on Thursday. Bowe and Jackson are friends from Ocala, Florida.

“All I can do is wait and see if someone declines their spot, I could go,” Jackson said. “I'm not giving up hope yet.”

The Americans have qualified two spots for the women's 500 in next month's Olympics.

“Nothing that can be done rule-wise to get her into the Olympics,” said Matt Kooreman, national long track program director. “It really is winner-take-all here at the Olympic trials.”

US Speedskating must submit its final Olympic roster by Jan. 17.

Kooreman said it would be up to either Bowe or Goetz to decide if they wanted to give up their spot in the 500.

Goetz was fifth in the 500 at the 2020 World Single Distance Championships. She is a first-time Olympian.

Neither of them would be as strong a medal contender as Jackson, who remained composed after her shocking slip.

“Erin Jackson is a complete class act,” Kooreman said. “To see this happen to her in particular is heartbreaking.”

Jordan Stolz won the men's 500 in a track-record 34.55 to qualify for his second Olympic event. The 17-year-old phenom won the 1,000 also in track-record time on Thursday.

“It’s pretty nice to be able to do two of them, especially since they’re two of my best distances,” Stolz said.

His parents are working as volunteers at the trials to be able to watch him in person after spectators were banned because of rising COVID-19 cases.

Austin Kleba finished second in 35.17, although he will have to wait to see if he'll go to Beijing since the U.S. men only have one quota spot in the event. Final quota reallocations for the Olympics will be done later this month.

“I’ve done everything I could up to now, so whatever the outcome is, I’m happy with my performance for sure,” Kleba said.