Springsteen, US fall to Swedes in jump off, earn silver 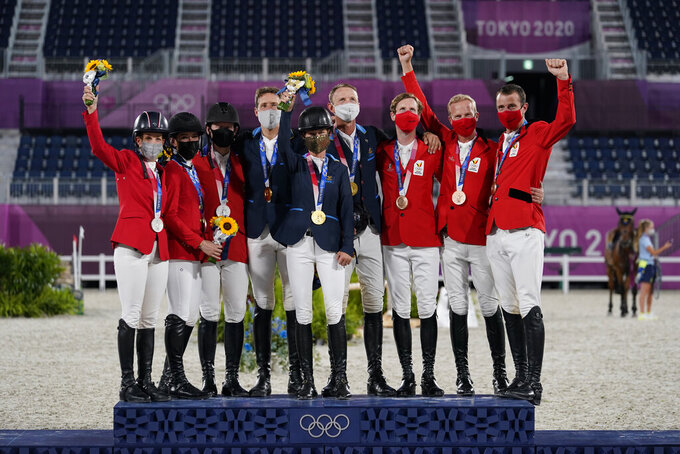 TOKYO (AP) — The Springsteen family has gone platinum many times over.

Time to make space for a little silver, too.

Jessica Springsteen and the U.S. equestrian jumping team came up just short of Olympic gold, falling to Sweden in a jump off Saturday night that still left the Americans with a record 10th medal in the event.

“I had really high hopes coming in today,” Springsteen said. “It really gave me a lot of confidence and the ability to have big dreams of riding with them so, I’m just so excited.”

It's the first for the 29-year-old Springsteen, the daughter of famed rockers Bruce Springsteen and Patti Scialfa, who made her Olympic debut in Tokyo. Riding powerful stallion Don Juan van de Donkhoeve, she clipped one rail in the primary round Saturday, as did McLain Ward, leaving the U.S in a tie with the Swedes for first with eight penalty points.

“I was happy we were able to pull it together and fight for the rest of the course,” Springsteen said.

Springsteen, Laura Kraut and Ward each moved cleanly through the shortened jump-off course and did so with a combined time of 124.2 seconds.

Peder Fredricson, the final Swedish rider, needed to circle the track in 40.30 seconds or better without error and cruised to a time of 39.01 for the country’s record fourth gold medal but first since 1924. The Americans also entered this week with three golds.

France had a clear line to a second straight gold when its final rider, Penelope Leprevost, took the course. Needing to finish with fewer than five points to win without a jump off, Leprevost’s horse refused twice, disqualifying her and the rest of the French team.

That left the Americans and Swedes tied for the lead and necessitated the jump off.

It's the second straight silver for the U.S. team, which won its last gold in 2008 — also with Kraut and Ward on the team.

Springsteen said after Friday's qualifying round that her parents have been watching from home, as athletes weren't allowed to bring family into Japan for these Pandemic Games.

She said she was inspired to begin riding after watching her mother take lessons, and she began her training on the family's farm in Colts Neck, New Jersey.