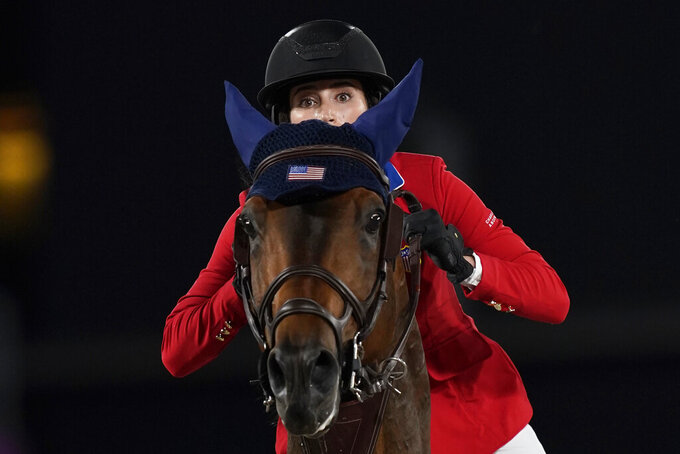 Springsteen and gold medal-winning teammates Laura Kraut and McClain Ward secured a spot in Saturday night's team jumping final with a trio of nearly perfect trips around the Equestrian Park course. Their combined 13 penalty points ranked fifth of 19 entrants — the top 10 advanced to the medal round.

Springsteen is the daughter of famed rocker Bruce Springsteen and his E Street Band wife, Patti Scialfa. The 29-year-old — ranked 14th in the world — failed to make the individual jumping finals in her Olympic debut this week but came back with a strong ride Friday. Her horse, Don Juan van de Donkhoeve, clipped a rail on the 13th of 14 obstacles, the only flaw on an otherwise impressive jaunt.

“Jessie’s brilliant," said Ward, a gold medalist in 2008 along with Kraut. "The horse is brilliant. She’s had actually a little bit of bad luck. Her horse jumps phenomenal, and I think will deliver a clear tomorrow.”

Springsteen is hardly the first rider with a famous parent to break through in the notoriously costly sport — most notably, Princess Anne represented Britain in the eventing competition at the 1976 Montreal Games.

But the spotlight has been bright on Springsteen this week, even though she's making just her first championship appearance in a field full of decorated riders.

About a half dozen members of the Bruce Springsteen Japan Facebook group gathered outside the locked equestrian stadium last week to offer support. Back home, nearly all the mainstreem coverage for equestrian has focused on her, and she's drawn by far the most attention from reporters in interview areas this week.

Springsteen said it's been easy to tune out the interest once her and Don are saddled up.

“For me, one thing about riding I've always loved, well first my love for the horse, but when I'm in the ring and the bell goes off, I'm completely, 100% focused on that,” she said. "So any outside pressures or anything else going on really kind of just fades away and I’m really in that moment.”

Springsteen learned to ride on a family farm in Colts Neck, New Jersey, first showing an interest when her mother started taking lessons.

“She was like my first riding idol," Springsteen said. "I used to watch her jump being like, ‘Oh my God, she’s jumping so big. I’m never going to be able to do that.’”

The farm also has Western horses, and trail rides through the woods are a regular hobby for the whole family. The group was barred from traveling to Japan to watch Jessica Springsteen in person due to the coronavirus, but the U.S. rider said they've been watching from New Jersey and sending photos of themselves in Team USA gear.

“I’ve been so grateful that my parents have supported me throughout my career,” she said. “They’ve been on this journey for me. It’s been like a huge dream for them as well, so I’m just really happy that I can make them proud.”

Sweden was the only country to complete qualifying without any penalties and will try Saturday for its first medal in the event since a silver in 2004. The defending champion French also qualified, as did traditional jumping standouts Germany, Belgium, Switzerland and Britain.