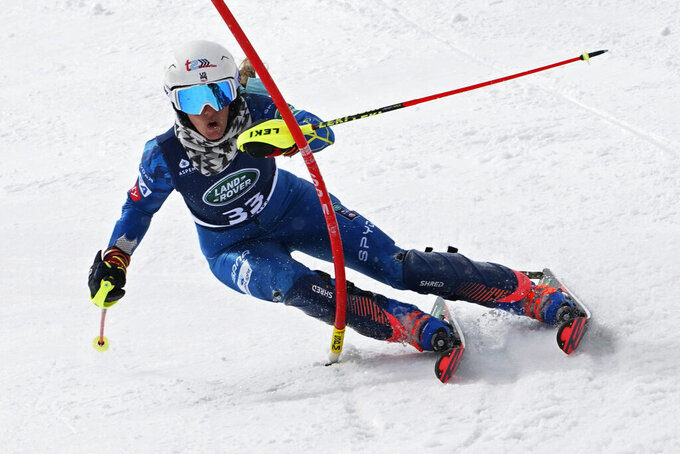 FILE - Resi Stiegler skis during a women's U.S. Alpine Championship slalom skiing race, Friday, April 16, 2021, in Aspen, Colo. The three-time U.S. Olympian will make a quasi-comeback at the World Pro Ski Tour’s championship races this weekend in Taos, New Mexico. She was lured back to the starting gate by a chance to take part in a unique-format event with her husband, German slalom racer David Ketterer, and to catch up with old friends. (AP Photo/Robert F. Bukaty, File)

A year ago, Resi Stiegler retired from ski racing. Eight weeks ago, she gave birth to her daughter, Rosi. A few days ago, she handed Rosi to her husband to sneak in an extra afternoon training session.

The three-time U.S. Olympian will make a quasi-comeback at the World Pro Ski Tour’s championship races this weekend at Taos Ski Valley in New Mexico. With lucrative prize money on the line, the field is loaded with Olympians, World Cup standouts, national team members, college standouts and those who just so happen to be coming out of retirement (see: Stiegler).

“I was planning on winning, because that’s who I am,” Stiegler cracked of her expectations with qualifying set for Friday, a men's and women's parallel slalom race Saturday and a parallel giant slalom race Sunday. “But then I didn’t know they were coming.”

“They” would be a reference to Erin Mielzynski of Canada and American Paula Moltzan, who both competed at the Winter Games in Beijing.

The tour that has long attracted elite racers. With roots dating to the late 1960s, it once featured the likes of Billy Kidd and the Mahre brothers (Phil and Steve) before disbanding around 1999. The tour came back in 2017, but the world championships were put off the past two years because of the pandemic.

Up for grabs will be $20,000 for the men’s and women’s winners in both races. Plus, there’s a $25,000 bonus for the male and female racer who perform the best in both events combined.

The competition will be side-by-side racing along a super-slalom course that features pro-style jumps. One run each on the red and blue courses (for fairness), with the winner advancing through a March Madness-style bracket based on time differential.

On the men’s side, there are names such as Linus Strasser, who was part of Germany's Olympic silver medal in the team parallel event in Beijing, and American River Radamus (fourth in the giant slalom in Beijing). There's also Robert Cone, the 30-year-old from Vermont who's dominated the circuit the last two seasons. In all, more than 50 men entered.

The field for the women is smaller — about two dozen — but just as stacked. Moltzan enters fresh off winning the slalom crown at the U.S. championships.

The tour isn’t designed to compete with the World Cup circuit. It’s simply another avenue for race competition.

“We're the NASCAR to their Formula One — complementary tours,” explained WPST CEO Jon Franklin, whose partnership deals include Rocket Mortgage. “The action should be fast and furious.”

Expect the unexpected, too.

That was the case with Tuva Norbye, the 25-year-old racer who retired from the Norwegian team due to a back issue. On a whim, Norbye, a grad student at the University of Utah, decided to compete at a WPST event in January. On borrowed skis and gear, she won the event and the $10,000 to go with it.

A month later, in Steamboat Springs, Colorado, she won again. Another $10,000.

For this event, she had her racing gear shipped from home and increased her training. The racers go through a time trial Friday to determine their seeding for the tournament, which will be a field of 16 for the women and 32 for the men.

“The competition level is really high, and here for the finals, it’s going to be the highest that it’s ever been,” Norbye said. “I’m excited for it. I’m actually getting a little nervous, too.”

A casual conversation with her husband, German slalom racer David Ketterer, enticed Stiegler back to the starting gate. He simply inquired: How fun would it be to race at an event together?

Extremely, Stiegler thought. And so here they are.

The excitement's building for the 36-year-old Stiegler, whose long but injury-filled career included 178 World Cup entries — one podium — and more than a dozen surgeries. Stiegler retired last April following a slalom win at the national championships.

Stiegler, who lives in Wyoming and trains at Jackson Hole, skied up to the day of Rosi’s birth in early February. She also watched the Beijing Games, and her heart broke for good friend Nina O’Brien, who fell near the finish line in the women's giant slalom and suffered a compound leg fracture.

Soon after the birth of Rosi, O'Brien wrote under Stiegler's Instagram post: “I know a good babysitter who has plenty of time on her hands.”

Stiegler said she is excited to back racing.

“If it’s this really awesome thing that goes well, I can really have a fun year (on the World Pro Ski Tour) next year,” said Stiegler, who serves as a coach for her husband and helps oversee Stiegler Ski Racing Camps with her brother.

Any chance of a full-scale comeback?