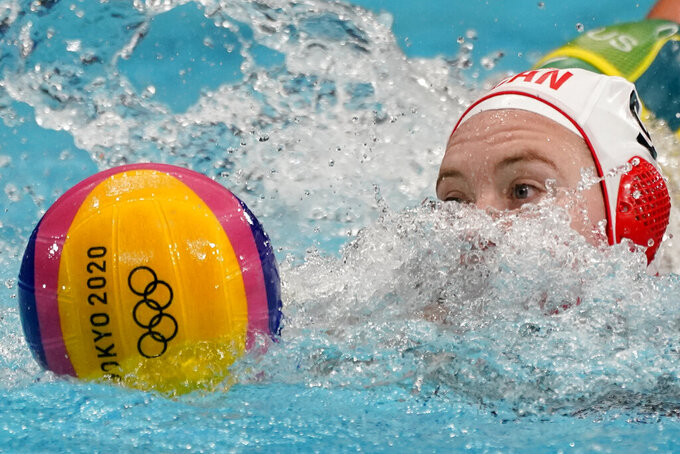 Canada's Hayley McKelvey swims after the ball during a preliminary round women's water polo match against Australia at the 2020 Summer Olympics, Saturday, July 24, 2021, in Tokyo, Japan. (AP Photo/Mark Humphrey)

TOKYO (AP) — Maud Megens is doing her best to catch up with some of her former Southern California water polo teammates during the Tokyo Olympics. The coronavirus restrictions make reunions more difficult, but there is one message that always works for the Trojans.

“At USC, we always say ‘Fight On,’ so everyone I see from ‘SC we ’Fight On,'” said Megens, who is hoping to lead the Netherlands to gold. “And that means we're family and we know that we're here for a reason. It's nice to have that family in the back of my mind. Even though it's just a college, I still regard them as my family.”

Led by Megens and a total of 16 current or former players from USC, there is a strong Pac-12 presence for the water polo competition at the Tokyo Games. While the Mountain Pacific Sports Federation, the home for the Pac-12's big water polo schools, has supplied the U.S. programs for years, it also has helped develop key players for other countries.

Megens and McKelvey faced off Sunday on the final day of group play for the women's tournament in Tokyo, with each player scoring twice in the Netherlands' 16-12 victory over Canada.

“I mean it’s always great to see Maud Megens, Paige Hauschild, I mean all the U.S. girls, everybody,” McKelvey said. “It’s so cool to have gone to school in the U.S. and then met so many great players, gotten the chance to play with them and now get the chance to compete against them at the Olympics. It’s awesome.”

The USC presence on the American teams includes Hauschild, Gilchrist, Stephania Haralabidis and Amanda Longan on the women's side, and Hannes Daube and Marko Vavic with the men.

“I've missed them. It's kind of weird seeing everybody, honestly,” Haralabidis said of her former USC teammates playing for other countries. “I haven't seen anybody for a very long time, so it's pretty exciting.”

Nine of Stanford's 10 players suit up for the U.S. teams. Canada's Gurpreet Sohi, the lone exception, played with U.S. captain Maggie Steffens with the Cardinal.

It was an All-Stanford connection when Makenzie Fischer found Steffens for her 48th goal at her third Olympics on Friday, breaking the career scoring record for women's water polo at the Games.

“I think the biggest thing from Stanford, you know, I could take it right from their quotebook, is leave your legacy,” Steffens said after setting the record. “That's something that stuck with me and still gives me chills to this day.”

California has eight players in Tokyo and two coaches; U.S. assistants Gavin Arroyo (men) and Chris Oeding (women). The Bears are scattered all over, with Kitty Lynn Joustra on the Netherlands, Anna Illes with Hungary, Roser Tarrago with Spain and Kelly McKee, Kindred Paul and Emma Wright suiting up for Canada.

Musselman and the United States were off Sunday, but they won Group B when Hungary lost to China 11-9. Next up for the Americans is a quarterfinal matchup with Canada on Tuesday.