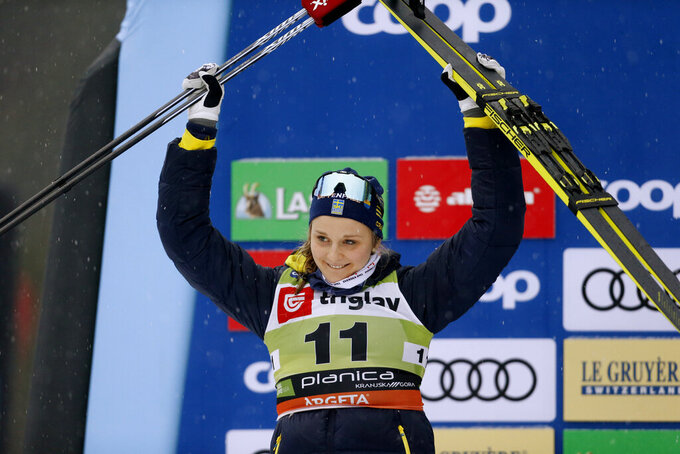 FILE - Second placed Sweden's Stina Nilsson celebrates on the podium after the cross-country ski, women's World Cup sprint event, in Planica, Slovenia, Dec. 21, 2019. Nilsson was at the top of her game after winning four medals at the 2018 Winter Olympics and two World Championship titles in 2019. But Nilsson shocked the Nordic community when she announced in 2020 that she was leaving one of the strongest cross country teams in the world to try her hand at biathlon. (AP Photo/Darko Bandic, File)

ZHANGJIAKOU, China (AP) — Swedish cross-country skier Stina Nilsson was at the top of her game after winning four medals at the 2018 Pyeongchang Olympics, followed by a World Cup sprint title and two gold medals at the world championships in 2019.

The 28-year-old Nilsson shocked the Nordic community when she announced in 2020 that she was leaving one of the strongest cross-country teams in the world to try her hand at biathlon. There was no guarantee she would even make the Swedish biathlon's World Cup team, let alone its 2022 Olympic roster.

Nilsson's biathlon results slowly improved during the 2021-22 season and by mid-January, after a stellar performance that helped her team win a silver medal in Ruhpolding, Germany, Nilsson was heading to Beijing.

She competes in her first Olympic event as a biathlete on Monday in the 15-kilometer (9.3-mile) individual race.

“She’s made a very impressive start from my perspective,” said Max Cobb, president and CEO of U.S. Biathlon. “Generally it takes three to four years to be able to put together a good biathlon performance even for someone who has good coaching, which she certainly does.”

Nilsson's coach, Johannes Lukas, said she fought for the spot on the team.

“Stina is a competitive girl,” Lukas said. “She was thinking quite clearly when she changed that this will be a long and hard work. But she was from the beginning ready to do the work.”

It's not the first time an Olympic athlete has changed sports and excelled at the Games.

Eddy Alvarez medaled in speedskating at the 2014 Sochi Olympics and then won a second silver in August in Tokyo as part of the U.S. baseball team. Canadian Clara Hughes medaled in cycling at the 1996 Atlanta Olympics and won speedskating medals in the 2002, 2006 and 2010 Games. American Lauryn Williams medaled in track and field twice, in Athens in 2004 and London in 2012, before winning silver in Sochi in two-woman bobsled.

Others have left Nordic skiing for biathlon with some success. Denise Herrmann of Germany was on the bronze-winning cross-country relay team in the 2014 Olympics before she switched to biathlon in 2016. She has won a world championship gold medal and 10 World Cup golds.

Nilsson made the switch to biathlon after she pulled a hamstring muscle while lunging for the finish line of a sprint race in Estonia, said Emma Hoglund, a spokesperson for the team.

“My first thought was to do one more Olympics as a cross-country skier and then switch after the season of 2022," Nilsson said. “But because of my injury I have gotten a lot of time to think and to try out the shooting and have come to term that I don’t want to wait any more.”

Already fast on skis, Nilsson had to learn to shoot a rifle and put the two together. The 8-pound firearm throws off a skier's center of balance and takes some time to get used to. Becoming an accurate shooter under pressure takes time and effort.

“She started from zero,” Lukas said. “I think we created also a great plan for her with a lot of competitions and some special training, extra shooting training. She was shooting a lot the first year and she gave 110% every day."

Having Olympic cross-country skiing medals did not mean special treatment, the coach said.

Nilsson accepted her place on the team and put in the work needed to advance, Lukas said.

American Jessie Diggins, who surged past Nilsson during a race in Pyeongchang to win the first U.S. Olympic gold in cross-country skiing, applauded Nilsson's courage.

“You’ve got to do what makes you happy and what keeps you fired up,” Diggins said. “It's such a cool challenge. I have no idea what inspired her, but I hope that she’s having fun.”