Swiss ski resorts show what 2022 Olympics could have been 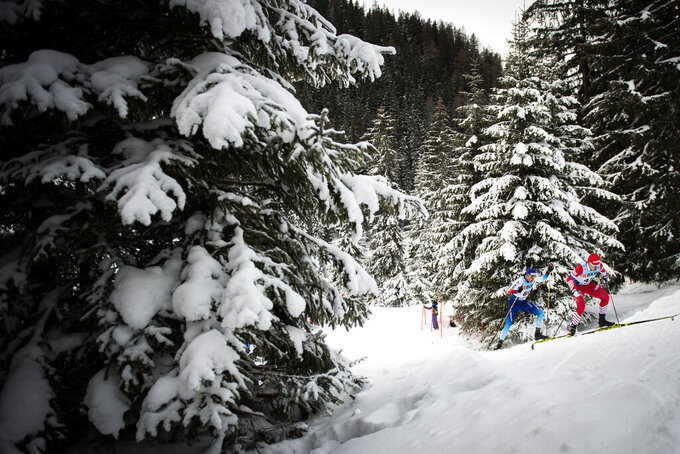 FILE - Dario Cologna of Switzerland, left, chases after Andrey Melnichenko of Russia during the men's 15 km free style race at the Davos Nordic FIS Cross Country World Cup in Davos, Switzerland, on Dec. 16, 2018. The 2022 Olympics is just weeks away with China a more problematic host than expected for a Winter Games that had once seemed destined for Europe. The past weekend of World Cup ski events in two upscale Swiss towns that wanted to stage these Olympics showed what might have been. Games in snow-covered resorts with decades of winter sports tradition and without diplomatic boycotts or talk of human rights records. (Gian Ehrenzeller/Keystone via AP, File)

ST. MORITZ, Switzerland (AP) — With the Beijing Winter Olympics only weeks away, China has become a more problematic host than expected for an event that originally seemed destined to be staged in Europe.

The past weekend of World Cup ski races in two upscale Swiss towns showed what might have been: Games in snow-covered resorts with decades of winter sports tradition and without diplomatic boycotts or talk of human rights records.

Nine years ago, the small towns with global luxury brands were set to bid together for the 2022 Olympics, promising to revive the intimacy of the magical 1994 Lillehammer Games.

They were a strong favorite to take the Winter Games back to Switzerland for the first time since St. Moritz hosted the event in 1948. What stopped them was the same tough opponent of many failed Olympic bids in western-style democracies: local voters.

“It was very hard for us,” Martin Berthod, who has organized ski races in St. Moritz for 40 years, told The Associated Press over the weekend. “We have worked quite hard at the time. We were very enthusiastic to get the Games back.”

The Olympics ended up going to Beijing with exactly the kind of hosting plan — ice events in a snow-free, sea-level city far from ski venues in the mountains — that St. Moritz-Davos was reacting against.

The Swiss campaign slogan, “Back to the Snow,” was meant to contrast with the 2010 Winter Games in rainy Vancouver and the tropical climate of Black Sea resort Sochi in 2014.

As Berthod recalls, the Sochi project with an eventual $51 billion price tag was a big reason why they lost the Swiss regional referendum in March 2013.

“They have been growing too much,” Berthod said, citing Sochi and Pyeongchang, which had just been awarded the 2018 edition before the referendum. “Our local people, not all of them but some of them, were against the games financially.”

Many “no” votes in the 52.66% majority came from industrial towns like Chur and Landquart at the foot of the mountains, skeptical of their tax money going to already wealthy ski resorts and of disruption caused by tens of thousands of Olympic athletes, officials and media arriving.

After Switzerland’s plan fell through, Norwegian lawmakers ended Oslo’s bid in 2014 when it had official candidate status from the IOC. It would have used Lillehammer for some events, including skiing.

One year later, the IOC chose Beijing over Almaty, Kazakhstan, in a tight vote. The decision allowed China try to build domestic winter sports tourism in new resorts with little or no natural snow.

And next year’s event will help the host country create a local winter sports tradition for the third straight time, rather than having Olympic athletes bask in it.

“We don’t know even how it’s going to be there (in China),” two-time Olympian Federica Brignone said Saturday in St. Moritz, “and here we know.”

Brignone, who won a bronze medal in giant slalom at the 2108 Olympics, said she was sorry the people of St. Moritz did not get the Olympics for 2022.

“There’s people coming to cheer, and I think there’s a lot of culture of Alpine skiing and winter sports,” she said.

The kind of compact plan the IOC asked St. Moritz-Davos for in 2013 is no longer wanted following the fallout from Sochi’s big spending. Any future Swiss Olympic bid would have to use established venues spread across the country, with St. Moritz essential for its bobsled track.

The IOC also doesn’t want to be routinely challenged in local votes. A new system for picking Olympic hosts relies on private talks to fast-track a preferred candidate.

“It will be a challenge but it could be quite a possibility to support sport and the country,” Berthod said, “and to bring all the people together.”