Top-seeded US 'not satisfied' by early success at Olympics 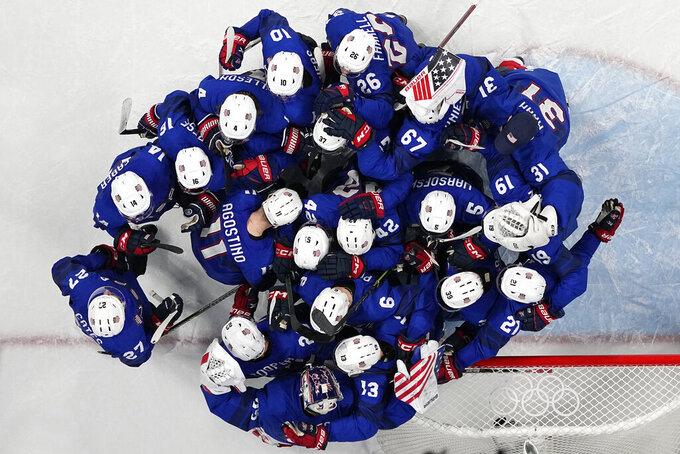 BEIJING (AP) — The young United States men's hockey team can't get no satisfaction from going undefeated in the preliminary round at the Olympics.

Rolling into the quarterfinals as the only team to win all three of its group games in regulation, the young Americans are suddenly among the favorites to win the gold medal. Their next test is a matchup against the winner of the Slovakia-Germany qualification round game with Sweden or Canada potentially up next in the semifinals.

“A lot of these players, younger guys like myself, have played on a lot of big stages, and we know that these playoff games are what’s important,” U.S. goaltender Drew Commesso said. “It’s nice to go in as the No. 1 seed, but we’re not satisfied at all. We’re going to enjoy the win, but once (the knockout round) starts, we’re going to be hungry for our next game and we’re going to attack our next game like it’s do or die because it really is.”

For all the U.S. accomplished in routing China, beating Canada and holding off Germany, it would amount to nothing with a loss Wednesday afternoon in the quarterfinals. It took surviving a last-minute scramble to beat Germany on Sunday, but playing in a tight game like that should only benefit this team.

“We’re going to see more of those going forward, so it was good for us to pull it out at the end,” said forward Sean Farrell, who leads the tournament in scoring with six points. “Games are just going to be tighter, more defensive, and we’re going to need to bear down and be able to kind of weather the storm at the end of the games.”

Captain Andy Miele also thought the games against Canada and Germany were about “proving that teams aren’t going to be able to run us out of the rink physically." The roster was built for speed and skill, but the U.S. has shown it can hang when things get tough.

Making it through those obstacles has given the Americans a sense of confidence that coach David Quinn can feel on the ice and in the locker room.

"There’s a swagger to us right now, and it’s not arrogance," Quinn said. “We believe in ourselves. There’s unwavering confidence in our group. People don’t know what we know about ourselves.”

The U.S. went into the Olympics as the biggest wild card because of a lineup with about a dozen college players, including a handful under the age of 21. Combined with veterans like Miele, first-line wingers Kenny Agostino and Brian O'Neill, and top-pairing defensemen Steven Kampfer and Aaron Ness, the team has formed an identity of fast, aggressive and hard to play against.

“We’re tenacious,” said Kampfer, who scored a power-play goal against Germany. “You look at the young guys, they’re all hungry. All of us are hungry. Whether it’s the guys that have played (in the NHL) before or are looking to play, I think everybody has a little bit of something to prove.”

Having something to prove is an identity in itself. The U.S. has not won Olympic gold since the Miracle on Ice team in 1980 and hasn't left with a medal since silver in Vancouver in 2010.

By earning the top seed, the Americans can avoid Finland and the Russians until the final. But they're not thinking that far ahead given that their work has just begun.

“The tournament really hasn’t started,” Commesso said. “The important games now are just starting. I know we’re definitely going to take this extra rest to our advantage. We’re going to recover the right way, do the right things so we’re best prepared for our next game.”