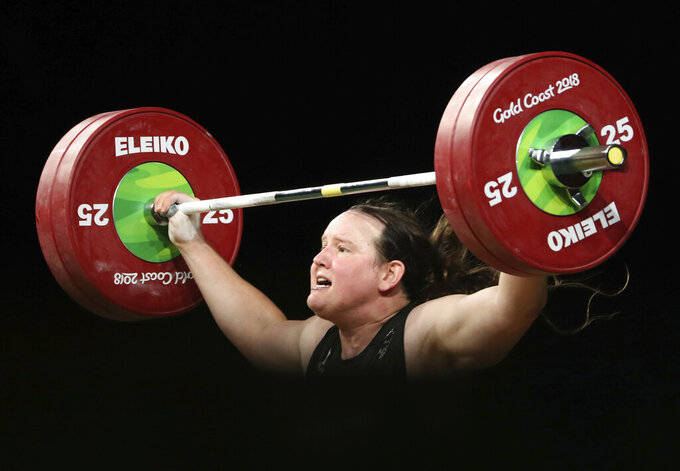 FILE - In this April 9, 2018, file photo, New Zealand's Laurel Hubbard lifts in the snatch of the women's 90kg weightlifting final at the 2018 Commonwealth Games on the Gold Coast, Australia. Hubbard, a transgender woman, is competing in weightlifting for New Zealand (AP Photo/Mark Schiefelbein, File)

TOKYO (AP) — Transgender weightlifter Laurel Hubbard is in Japan for the Tokyo Games and thanked the International Olympic Committee on Friday for helping to make it possible for her to compete.

Hubbard has been a focus for support and criticism since qualifying for the Tokyo Olympics. She is a medal contender in the women’s over-87-kilogram weightlifting category on Monday.

“The Olympic Games are a global celebration of our hopes, our ideals and our values. I commend the IOC for its commitment to making sport inclusive and accessible,” Hubbard said in comments provided by the New Zealand Olympic Committee.

“Laurel has just arrived a couple of days ago. I just bumped into her at lunch and we understand that she’s comfortable," NZOC secretary-general Kereyn Smith said. "She’s getting ready. She well understands the size of the stage and is very grateful to be able to compete in this environment.”

The IOC in 2015 drew up a set of recommendations for including transgender athletes. Many sports bodies including the International Weightlifting Federation have implemented similar policies based on the IOC recommendations. Different sports are allowed to set their own specific policies.

The IOC signaled it will release a new “framework” for transgender athletes' eligibility, taking into account newer scientific studies. That will form a basis for sports to draw up their own updated policies.

“We funded some of those (studies) based particularly importantly on individuals who are transgender and seeing what the effect of transitioning actually has on their performance, because that’s what we really need to know,” Budgett said.