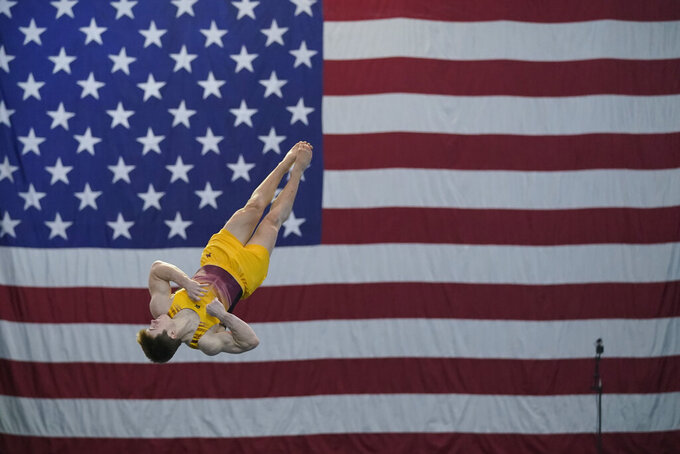 Brett McClure wanted to lower the temperature. So the high-performance director for USA Gymnastics' men's program told everyone who showed up for this weekend's Winter Cup in Indianapolis that they would be assured a spot in more important meets this spring regardless of how they performed.

“This was just a baseline check to see where everyone was at,” McClure said.

A necessary one too after the COVID-19 pandemic made training scattershot and actual meets nonexistent for the better part of a year. While there was plenty of proof of rust, there were also signs of promise for a program trying to deepen the talent pool it can draw from on the international stage.

“It was a lot better today,” said Wiskus, who finished fourth in the all-around on Friday. "So honestly, my whole mentality for this weekend was to just get back out there competing and get my footing into this quad.”

Footing that Wiskus — who moved from the University of Minnesota to the U.S. Olympic Training Center last fall — believes will help him out as things get more serious in the coming months.

“Next time, I'll have experience and I'll feel better," he said. “It was just important for me to be here.”

It might have been even more important for Donnell Whittenburg. The 26-year-old is a two-time world championship medalist and served as an alternate on the 2016 U.S. Olympic team. The last four-plus years have been uneven at best. He left the U.S. Olympic Training Center and now trains at a private gym in Wisconsin.

It's been a reality check in more ways than one. While Whittenburg's training wasn't affected too much by the shutdown, the reality of being in a gym where he trains alongside young gymnasts of all skill levels on equipment that isn't quite the same as what he was used to at Olympic Training Center is jarring.

It's also a reminder of growing up in Maryland.

“I was at a club gym, we didn’t have the best equipment,” he said. “But like being around the kids in the gym and getting the energy from the gym. It’s been quite the process, I’m enjoying it.”

Still, Whittenburg knows he's getting to the “now or never” portion of his career. He finished a distant 11th in the all-around and began Sunday with another nightmarish turn on the pommel horse. He recovered to finish second on both rings and floor exercise.

“My performance overall, little shaky here and there but I’m a fighter so I’m just going to keep pushing, do the best I can, never give up,” Whittenburg.

Whittenburg might as well have been talking about the meet as a whole. There's plenty of work to be done between now and Tokyo, though for most simply getting back on the floor was a step in the right direction.

“It doesn’t matter what we look like now, it matters what we’ll look like in six months,” Moldauer said. “You have to realize it’s been a crazy year.”

The Winter Cup brought what McClure hopes will be an increasing sense of normalcy. Yet the year down also made his job over the summer a bit harder. More faces have entered a crowded elite picture and expansion to the number of athletes on the senior national team means he won't lack for options as preparations for the Olympics in July and world championships this fall ramp up.

While six-time national champion Sam Mikulak figures to be a lock for Tokyo provided he stays healthy, after things are decidedly murky. That's not a bad thing.

“We wanted to widen the net as much as possible,” he said. “The next three months can give you a lot of information ... We’ve been living on zoom for a long time now and it feels good to finally get on a competition floor.”