US women's volleyball team's quest for gold began in Rio 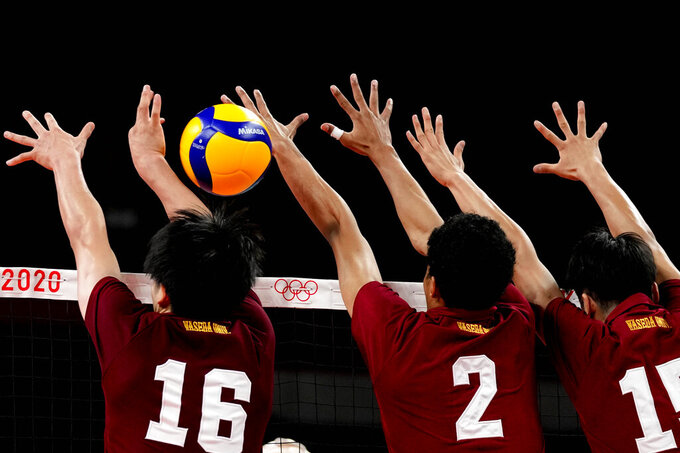 Volleyball players play during a rehearsal for the start of the volleyball preliminaries at Ariake Arena during the 2020 Summer Olympics, Friday, July 23, 2021, in Tokyo, Japan. (AP Photo/Frank Augstein)

TOKYO (AP) — For the U.S. women’s volleyball team, the road to this Olympics and a quest for the country’s first gold medal in the sport began in the hours after a frustrating semifinal loss to Serbia in the Olympics five years ago.

An inspiring letter from beach volleyball star Kerri Walsh Jennings about the importance of rebounding from a heartbreaking loss helped the U.S. women claim the bronze medal and give them something to build on for the next Olympic Games.

The women’s team made it back for another shot this year and begins the journey for that elusive gold medal in its first pool play match on Sunday against Argentina.

“Of course, we talk about it,” three-time Olympian Jordan Larson said. “A gold medal is a goal and something that we’ve never done before as the United States indoor women’s volleyball team. So we talk about it but at the end of the day, the conversations that we’re having as a team is how can we make each other better and have those small things lead to good volleyball. While the gold is a focus of ours, it’s not our end all, be all.”

The tournament starts Saturday with six men's matches before the women take the court for the first time on Sunday.

The U.S. women believed they were in position to claim that gold medal in Rio de Janeiro in 2016. They raced through pool play undefeated in five matches and swept Japan in the quarterfinal match.

The U.S. then won the opening set against Serbia but lost star Foluke Akinradewo Gunderson to a knee injury that knocked her out for the rest of that match. Serbia won the next two sets before the U.S. forced a fifth set that the Serbians took 15-13.

That left the U.S. playing for a bronze and wondering what could have happened if only a few plays had gone differently.

“I still wake up some nights at 3 a.m. thinking about certain plays we didn’t make in that semifinal match that we could easily have made under other circumstances,” said coach Karch Kiraly, who won gold twice as a player in indoor volleyball and a third time in the beach competition.

“At first when it happened, I’m sure a lot of our players and a lot of our staff were having trouble sleeping over that. But I think the opposite side of that coin is that we were all tremendously proud of the response that we formulated after a soul crushing loss to come back and then be inspired, frankly, by Kerri Walsh Jennings and her partner April Ross.”

Walsh Jennings talked about her frustration of a semifinal loss and the pride she felt winning the bronze and the U.S. team took that measure to heart and responded with a win against the Netherlands.

Kiraly, Larson and the other members of the team back for another Olympic run believe that experience will pay dividends this year if the team needs to bounce back after a loss in pool play or mount a rally in a key match in the medal round.

“It’s really tough when you have your goal set on one thing and that dream you worked so hard for over four years is crushed,” Gunderson said. “We didn’t get our aspiration of getting that gold medal and so we definitely grieved after that semifinal match. But then it was time to get over it, come back together and grind to win. I was really proud of our team’s resolve and the way that we were able to fight and unite together after such grief. I think having dealt with that, I think it’ll help us moving forward.”