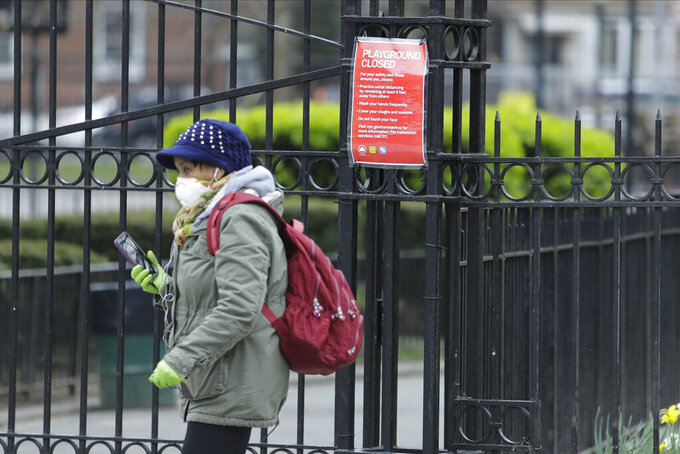 A woman passes a closed park Thursday, April 2, 2020, in the Corona section of the Queens borough of New York. The new coronavirus causes mild or moderate symptoms for most people, but for some, especially older adults and people with existing health problems, it can cause more severe illness or death. (AP Photo/Frank Franklin II)

NEW YORK (AP) — The coronavirus pandemic has hit especially hard in a few poorer New York City neighborhoods where telecommuting isn’t an option for many workers and there are more likely to be many people living under one roof.

Residents of the immigrant-rich Jackson Heights, Elmhurst and Corona sections of Queens have tested positive for the virus in greater numbers than in other parts of the city, according to data released Wednesday by city health officials.

People living in one Queens zip code just south of LaGuardia Airport were roughly four times as likely to have tested positive as people in the gentrified section of Brooklyn that Mayor Bill de Blasio calls home.

A disproportionately high number of people have also tested positive for COVID-19 in certain Brooklyn neighborhoods that are home to many Orthodox Jews, for whom large families and frequent communal gatherings could have led to easier transmission of the virus.

Yet other places, just as poor and just as crowded, have had it easier.

An Associated Press demographic analysis of the more than 170 zip codes where New York City has reported COVID-19 cases shows little consistency in where outbreaks have been worse.

The areas of New York that have a larger share of households with people over 65 had higher rates of confirmed cases per 1,000 people, the AP found. But other demographic variables – from high household incomes to large shares of foreign-born populations to areas with large numbers of overcrowded housing units – saw no significant link to COVID-19 case trends.

The numbers do help explain something that has seemed obvious to people living in the hard-hit Queens neighborhoods served by Elmhurst Hospital, where long lines of people waiting for testing and treatment have been one of the defining images of the pandemic.

Some places have suffered disproportionately.

Verónica Domínguez, a 48-year-old Mexican immigrant who lives with seven relatives in a three-room apartment in Corona, Queens, has been too scared to go out for the last two weeks.

“I fear for the kids. I don’t want to keep working, get sick and pass the virus to them. The oldest has asthma,” she said in Spanish, referring to a 12-year-old granddaughter.

“There are hard moments in which I don’t want to be cooped up anymore. But then I see the news, and I see how bad this area has been hit, and I repeat to myself that is better to stay home,” she said.

Asked about why some areas had been hit harder than others, Dr. Mitchell Katz, chief executive of the city-run hospital system, said crowded housing could play a role.

“We know that in Queens, many families, because of poverty, live together in very close quarters. So that while we are practicing as a city social distancing, you may have multiple families living together in a very small apartment. And so it’s easy to understand why there’s a lot of transmission of COVID occurring,” he said.

Yet some neighborhoods with significant numbers of poorer immigrants, like the bustling Chinese community in Flushing, Queens, have had as few positive tests per capita as any wealthy, whiter part of the city.

As of Thursday morning, the city had recorded 1,397 deaths from the virus. More than 48,000 city residents have tested positive for COVID-19. The true number of people sickened by the virus is likely much higher because officials have been rationing tests and encouraging all but the most seriously ill people not to seek treatment and instead ride it out at home.

Jackson Heights resident Guillermo Pintero is one of them.

Even though the virus has him feverish and struggling for enough air to finish his sentences, he's stayed out of the hospital and is riding it out in the studio apartment he shares with his three children.

The 64-year-old Ecuadorean construction worker said through a translator that his family is unable to bring in much money.

“My son, he was called in to work two days last week, but since then they haven’t called him. I haven’t worked for much longer than that. Right now, we’re trying to make do with the savings that we have.”

U.S. Rep. Grace Meng, who represents the part of Queens suffering the most, said many of her constituents do not have the luxury of staying home to self-quarantine.

“A lot of my constituents are considered essential workers. A very high percentage of them are in the service industry, and so they aren’t able to just stay home,” she said. “Or they might be living with a relative who is an essential worker, a front-line worker that might not be able to self-quarantine either.”

Katz said people getting sick in western Queens face a second problem, which is that their part of the city has half as many hospital beds per capita as Manhattan.

Javier H. Valdés, co-executive director of the anti-poverty group Make the Road New York, added that in communities like Corona and Elmhurst "far too many residents lack access to adequate health care and live in overcrowded conditions. Safe, affordable housing is out of reach, and they are facing extreme vulnerability at this moment.”

The city’s public hospital system has been trying to ease the burden on Elmhurst Hospital by moving some patients out and moving additional staff in. It also increased its number of intensive care unit beds from 29 to 111 in 10 days.

Most people who get the virus experience mild or moderate symptoms, including fever and cough. Others develop pneumonia, sometimes requiring hospitalization. The risk of death is greater for older adults and people with other health problems.

The AP’s analysis used the city’s zip code data as of 5 p.m. on April 1 and multiple variables from the American Community Survey regarding housing, age, race, immigration status and income.