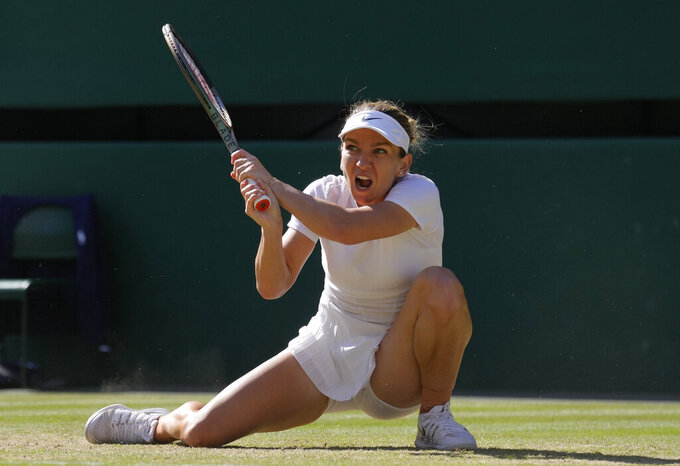 WIMBLEDON, England (AP) — The Latest from Wimbledon (all times local):

Elena Rybakina represents Kazakhstan but was born in Russia. She says she lives “on tour.”

The 23-year-old Rybakina will play Ons Jabeur in the Wimbledon final on Saturday. She beat Simona Halep 6-3, 6-3 in the semifinals.

As she has progressed in the tournament, Rybakina has been answering questions about her Russian heritage. The All England Club has banned players from Russia and Belarus this year because of Russia’s invasion of Ukraine.

The 17th-seeded Rybakina switched to represent Kazakhstan in 2018. She competed at the Tokyo Olympics, losing the bronze-medal match to Ukrainian player Elina Svitolina.

She had said after her quarterfinal victory that her nationality switch was good timing because Kazakhstan was looking for players and “I was looking for some help. They believed in me.”

Rybakina is the first player from Kazakhstan to reach a Grand Slam final.

Asked if she lives in Moscow, Rybakina replied: “I’m based on tour because I’m traveling every week. I think most of the time I spend on tour. I practice in Slovakia between the tournaments. I had camps in Dubai. So I don’t live anywhere, to be honest.”

She said after her quarterfinal win: “I just want the war to end as soon as possible.”

Rafael Nadal has withdrawn from Wimbledon.

The 22-time Grand Slam champion has an abdominal injury and says he won't play his semifinal match against Nick Kyrgios on Friday.

Both the 17th-seeded Rybakina and third-seeded Jabeur are first-time Grand Slam finalists.

The 23-year-old Rybakina is the youngest Wimbledon finalist since 2015 when Garbiñe Muguruza lost to Serena Williams.

Halep, the 2018 French Open champion, had reached the semifinals without dropping a set but was broken early in both sets.

The 30-year-old Romanian wasn’t able to defend her Wimbledon title last year — after the 2020 edition was canceled — because of a calf injury.

The second women’s semifinal match between Simona Halep and Elena Rybakina has started on Centre Court at Wimbledon.

Halep won the title at the All England Club in 2019. Rybakina has never been this far at a major tournament.

The winner will play Ons Jabeur in Saturday’s final.

Ons Jabeur advanced to her first Grand Slam final by beating Tatjana Maria 6-2, 3-6, 6-1 on Centre Court at Wimbledon in a victory that is also a first for Arab and African women.

The Tunisian is the first Arab woman to reach a major final and the first African woman to do so in the Open era.

In the deciding set, Jabeur twice broke her 34-year-old German opponent — who was a first-time Grand Slam semifinalist — en route to 5-0 lead.

This was Maria’s 35th appearance at a major tournament, and the 103rd-ranked player had never been beyond the third round previously.

The 27-year-old Jabeur and Maria are good friends — “barbecue buddies,” as the Tunisian said.

The women’s semifinal match between Ons Jabeur and Tatjana Maria has started on Centre Court.

Neither player has ever been this far at a major tournament.

The winner will play either Simona Halep or Elena Rybakina in Saturday’s final.

There will be at least one first-time Grand Slam finalist when the women's semifinals finish.

Ons Jabeur and Tatjana Maria will play in the first match on Centre Court. Neither has ever been this far at one of the four major tennis tournaments.

Simona Halep will take on Elena Rybakina in the second match. Halep won the Wimbledon title in 2019 and the French Open the year before. Rybakina is playing at the All England Club for only the second time. She lost in the fourth round last year.

The women's final will be played Saturday.

The men's semifinals are scheduled for Friday. Novak Djokovic will face Cam Norrie and Rafael Nadal will play Nick Kyrgios for a spot in Sunday's final.