5000m contender Niyonsaba out of world champs with injury 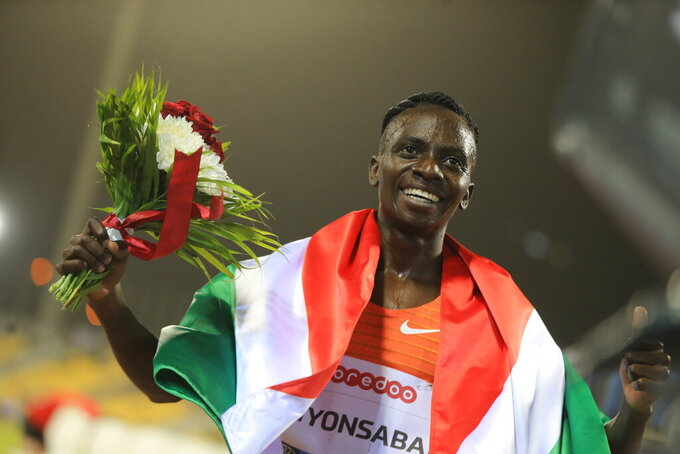 FILE - Francine Niyonsaba of Burundi celebrates winning the woman's 3000 meters at the Qatar Diamond League athletics meet in Doha, Qatar, May 13, 2022. Niyonsaba withdrew from the world championships Monday, July 11, 2022, with a foot injury, just when she looked to be a good bet for her first major medal in the 5,000 meters after being forced to switch to long-distance events by track and field's contentious testosterone rules. (AP Photo/Hussein Sayed, File)

Francine Niyonsaba withdrew from the world championships with a foot injury on Monday, just when she looked to be a good bet for her first major medal in the 5,000 meters after being forced to switch to long-distance events by the contentious testosterone rules.

Niyonsaba said on Instagram she had signs of a stress fracture a month ago and, although she was almost fully recovered, she missed too much training. She said she was “extremely sorry” to withdraw.

Burundi's Niyonsaba is a former Olympic and worlds silver medalist in the 800 meters but was barred from that event by regulations governing athletes with intersex conditions known as 46,XY differences in sex development.

Those are the same rules that have kept South Africa's two-time Olympic champion Caster Semenya out of the 800 for the last three years.

The rules, which were introduced in 2019, force athletes with 46,XY DSD to undergo treatment to reduce their high natural testosterone to below a threshold set by World Athletics if they want to compete in certain female events.

Semenya, Niyonsaba and other DSD athletes have declined to do that since the latest rules were put in place and have been banned from competing in distances from 400 meters to one mile. World Athletics says the natural high testosterone gives them an unfair advantage in those female competitions, though the world body's scientific evidence to back that up has been questioned.

Both Semenya and Niyonsaba have switched to the 5,000 because it doesn't fall under the rules, and Niyonsaba has had promising results after reinventing herself as a long-distance athlete.

She won the 5k race at the Diamond League final last last September, beating two-time world champion Hellen Obiri of Kenya. Niyonsaba qualified for the 5,000 final at last year's Tokyo Olympics only to be disqualified after her heat because of a lane infringement. She has said it was an unfair disqualification.

While Niyonsaba will miss out, Semenya is set to run in the 5,000 in Eugene and make her first appearance at a major championship since the worlds in 2017, when she and Niyonsaba finished 1-2 in the 800 meters. Semenya was a surprise inclusion for the 5,000 at the worlds after she missed the qualifying mark but was given a place after higher-ranked runners didn't enter.

The South African's return to the big stage comes just weeks after World Athletics president Sebastian Coe said the body will review its rules on DSD and transgender athletes competing in female events by the end of the year. Changes to the DSD rules may totally exclude the likes of Semenya, Niyonsaba and 200-meter Olympic silver medalist Christine Mboma from all female competitions.

The move by World Athletics to review and possibly extend its restrictions came after swimming world body FINA announced last month it was effectively banning transgender women from female competitions. That announcement appears to have emboldened track and field to make its regulations stricter.

Currently, DSD and transgender athletes can compete in track if they reduce their testosterone levels. There are currently no openly transgender women in top-level international track and field. Semenya and Niyonsaba are not transgender but have the intersex condition 46,XY DSD, which means they have both male and female traits. They were assigned female at birth, raised as girls, and have always identified as women.

The transgender and DSD issues are separate but have crossover in sport because they essentially deal with the same debate: Whether women with natural testosterone levels higher than the typical female range should be allowed to compete in female events.