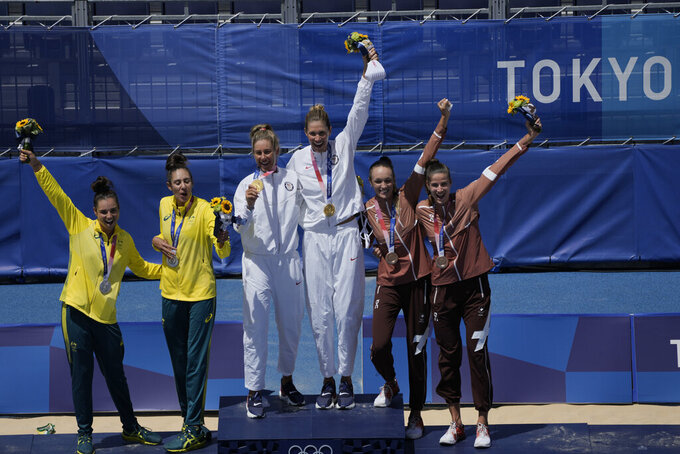 TOKYO (AP) — The new medal standard in Olympic women's track has been set. American Allyson Felix stands alone at the top and still has a chance to go even higher.

The 35-year-old Felix won her record 10th Olympic track medal Friday night at the Tokyo Games with a push down the home stretch of the 400 meters to take the bronze medal.

Felix now has more Olympic track and field medals than any woman in history in a career that goes back to 2004 in Athens. She came to Tokyo even with Jamaican runner Merlene Ottey.

Her 10th medal also ties her with the great Carl Lewis for the most by an American athlete. She could break that Saturday when she's expected to run in the 1,600-relay.

“It’s something I felt I could accomplish. I feel like I have come a long way from all the other Games. This one is just different,” Felix said. “I’m not too wrapped up in winning more medals. The biggest thing for me was coming back."

Shaunae Miller-Uibo of the Bahamas won the 400 in 48.36 seconds to defend her Olympic title. Marileidy Paulino of the Dominican Republic finished second a full .84 seconds behind. Felix took bronze by a mere .15 seconds ahead of Stephanie Ann McPherson of Jamaica.

It was a far less dramatic finish than in 2016 when Miller-Uibo dived at the finish line to edge out Felix for the gold.

Later at Olympic Stadium, Italy won another surprise sprint gold medal when Filippo Tortu ran down Britain's Nethaneel Mitchell-Blake on the anchor leg for the victory by 0.01 seconds.

The Italy win gives 100-meter champion Marcell Jacobs his second gold medal of the Games. It was Italy’s first Olympic medal in the relay since a bronze at the 1948 London Olympics. The U.S. men did not qualify for the final.

“This is the year of Italy,” Jacobs said “This is our year.”

Canada earned its first women's soccer gold medal by beating Sweden in a penalty shootout. Canada won bronze in 2012 and 2016.

The game time had been changed from 11 a.m. to 9 p.m. to avoid Tokyo's stifling heat and humidity and the teams played to a 1-1 draw through regulation and extra time. That set up the penalty kicks where Canada prevailed 3-2 on Julia Grosso's match winner that bounced off the right hand of Sweden goalkeeper Hedvig Lindahl.

“It’s kind of a fairytale story like, ‘Oh, you know I’m going at 39 to try and get my gold medal,’ and the fact that it actually happened feels so special and surreal,” Ross said.

The U.S. women's volleyball team avenged a gold-medal match loss to Serbia in 2016 with a 25-19, 25-15, 25-23 victory that sends them back into the final against Brazil, which beat South Korea in straight sets in the other semifinal. The Americans have made three previous gold medal finals, but have never won.

“It wasn’t like, ‘Oh we have to get redemption of this or that,’” U.S. star Foluke Akinradewo Gunderson said. “It was we just want to win a gold medal and whatever that’s going to take, we’re going to do that.”

The U.S. women's basketball team will play Japan in Sunday's final after rolling over Serbia 79-59 behind 15 points and 12 rebounds from Brittney Griner. Japan beat France 87-71.

If the Americans win Sunday, they would match the seven consecutive Olympic titles won by the U.S. men from 1936-68.

And for Sue Bird and Diana Taurasi, it would be five career gold medals, the most ever by a basketball player in the Olympics.

“I think everybody here wants to win gold for them, for us, for everybody that’s started this streak that got us here,” Griner said.

American Nelly Korda finished with 12 straight pars for a 2-under 69 to maintain her overall lead in pursuit of the gold medal in women's golf at Kasumigaseki Country Club. She had a three-shot lead over Aditi Ashok of India, who had a 68.

And for now, there will be a final round. Olympic golf officials plan to start play as early as possible Saturday and take advantage of a window they hope is big enough to squeeze in 72 holes before a forecasted tropical storm.

American Gable Steveson defeated Georgia’s Geno Petriashvili 10-8 to earn wrestling gold in the men’s freestyle 125-kilogram class. Georgia challenged the final points, to no avail. Steveson, as is customary after his biggest wins, celebrated with a backflip.

Steveson scored on a spin-behind takedown with 10 seconds remaining, then another with less than a second remaining for the win.

Dawid Tomala of Poland won what might be the last 50-kilometer race walk at the Olympics. Tomala won in 3 hours, 50 minutes and 8 seconds in Sapporo for the gold medal. He won only the second 50-kilometer race he had ever completed.

The 50-kilometer walk has been dropped from the schedule for the next Olympics in Paris in 2024 and may not return. It was first introduced at the 1932 Los Angeles Olympics and has been held at every Games since with the exception of Montreal in 1976.