AP Was There: Dream Team rolls in Barcelona to Olympic gold 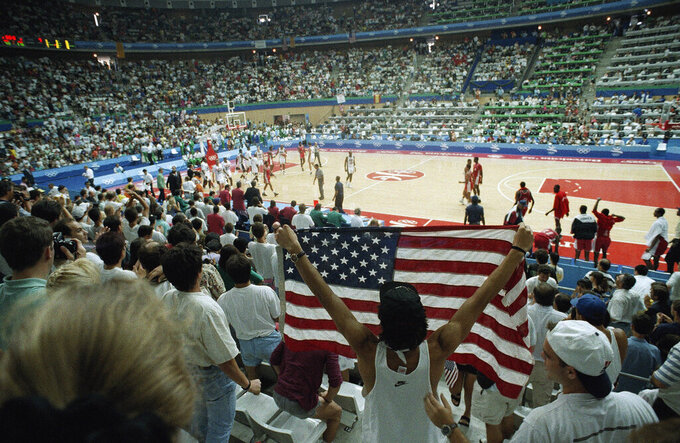 The “Dream Team” with the first U.S. Olympic men’s basketball team to field active NBA players rolled to gold at the 1992 Barcelona Games. The Americans went unbeaten and won all eight games by an average of 44 points. The guards were Michael Jordan, Magic Johnson, Clyde Drexler and John Stockton. The forwards were Charles Barkley, Larry Bird, Karl Malone, Scottie Pippen, Chris Mullin and Christian Laettner. Patrick Ewing and David Robinson were the centers. The Associated Press is republishing verbatim the story of the Dream Team's gold medal victory on Aug. 7, 1992.

The Dream Team fulfilled its mission Saturday night, winning the Olympic gold medal with a workmanlike 117-85 victory over Croatia that re-established U.S. dominance after a generation of decline and defeat in international competition.

“We were able to do what everyone expected us to do,” said Michael Jordan, who scored a team-high 22 points. "Now we can be proud of our basketball program again."

In the end, Team USA, unstoppable and unchallenged through the first seven games, was merely unstoppable.

It actually trailed 25-23 more than halfway through the first half before Charles Barkley hit a 3-pointer, turned toward the opposing bench and pumped both fists as if to tell the Croats they would never see the lead again.

The United States went on to a 56-42 halftime lead, still its smallest of the Olympics, then started the second half with an 11-2 run. The eighth consecutive blowout was assured. The gold medal, only the United States’ third in basketball since 1972, was never in doubt again.

Playing the best a fragmented world had to offer, the Americans shattered the previous Olympic scoring record and became the first team to score at least 100 points in every game. They averaged 117.3 points, easily eclipsing the 1960 U.S. team’s standard of 101.9. They won by an average of 43.8 points - the 32-point margin in the final being the closest.

So how far behind is the rest of the world now?

When it was over, the players on the bench hugged Daly, and Barkley — smiling widely — went on the court and gave his warmup jacket to Croat Dino Radja.

On the medals stand, Magic Johnson, Jordan and Barkley had American flags draped over their right shoulders, hiding the Reebok logos on the warmup suits some players had protested wearing because of conflicting commercial endorsements.

"The only way I could think of to not deface (the uniform) was the American flag," Jordan said. “If I offended anyone, it’s too bad.”

The Dream Team was born out of the humiliation of a series of international losses, including the 1987 Pan American Games to Brazil, 1988 Olympic semifinals to the Soviet Union and the 1990 world championships to Yugoslavia.

The seeds, though, went all the way back to 1972, when an all-collegian U.S. team suffered its first-ever loss in 63 Olympic games - to the Soviets, who scored the winning basket after the final seconds were replayed three times.

That memory served as some final inspiration Saturday night. The team watched it on tape before taking the court against Croatia.

The Dream Team spent almost as much time defending itself as defending opponents. It was criticized for staying in an exclusive hotel instead of the athletes’ village, for balking at wearing the Reebok warmup suits, for not showing more excitement on the court.

It didn’t help that they were never pressed in a game, never forced to play their best.

"I dreamed of playing in the Olympics as a young kid, but when you win by 50 every game, I think it takes away from it," said Larry Bird. “But when my kids grow up, I can say I played in the Olympics and won the gold medal. If the games were closer, we would’ve seen more emotion. I cry a little when I see guys win a close race, but it’s different when none of the games are close.”

Croatia has four players who were on Yugoslavia’s team that won the 1990 world title, the last major international basketball tournament without American NBA players.

But even an all-star team from the rest of the world probably wouldn’t have presented a challenge to the Dream Team.

"You’ll see other teams of professionals, but you won’t see a team quite like this one," said coach Chuck Daly, who never called a timeout the entire Olympics. “It’s a majestic team. The players on the teams to follow will be known to an extent, but not like these guys.”

These guys were the best ever, 11 NBA All-Stars and college player of the year Christian Laettner, and even for them the gold medal was special.

Barkley was cut in tryouts for the last U.S. Olympic champion, the 1984 team that included fellow Dream Teamers Jordan, Patrick Ewing and Chris Mullin. He led this one with an 18-point average, 17 in the final game, and was exuberant with the gold medal around his neck.

"This is the greatest athletic event in my life," Barkley said. “My only other ambition in life as far as athletics is to win an NBA championship.”

Magic Johnson, who won the NCAA title at Michigan State and five NBA titles with the Los Angeles Lakers before retiring last season after learning he had contracted the virus that causes AIDS, said this was the best.

"You can combine them all together,” he said, “and it still wouldn’t rank with this.”

"This shows you’re the best. It’s nothing like winning the world championship, but walking away with a gold medal is totally different,″ Pippen said. ”You’re not just representing one city but the whole United States, and to walk out and stand tall as they’re raising the U.S. flag, nothing means as much to me as having this gold medal.”