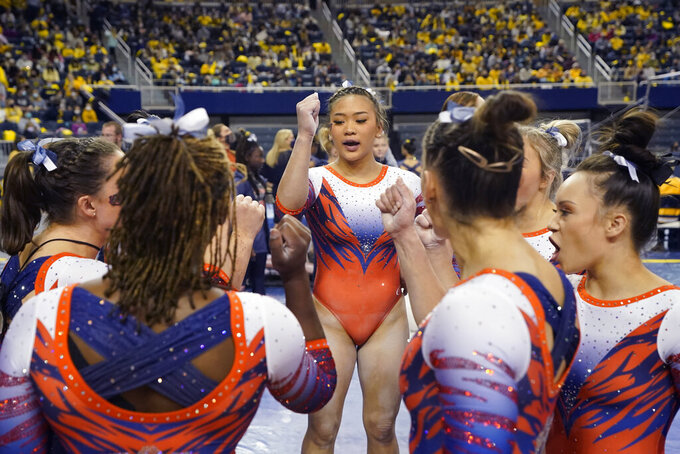 Auburn gymnast Sunisa Lee gathers with teammates before performing at a meet at the University of Michigan, Saturday, March 12, 2022, in Ann Arbor, Mich. A record crowd came out to watch Lee, the reigning Olympic champion, and Auburn take on defending national champion Michigan. The arrival of Lee and several of her Olympic teammates at the collegiate level is helping fuel a spike in interest and participation in NCAA women's gymnastics. (AP Photo/Carlos Osorio)

Sunisa Lee and the rest of the Auburn women's gymnastics team filed out of Stegeman Coliseum on Georgia's campus in mid-February, equal parts exhausted and giddy. A happy three-hour trip home awaited after the Tigers edged the Gymdogs on the road for just the second time in program history.

Then the doors to the parking lot swung open and what is normally a low-key part of every away meet became something else entirely. A group of 300 or so fans surrounded the Auburn bus, many hoping to grab Lee, the reigning Olympic all-around champion, or one of her teammates for a selfie. Or a signature. Or a wave. Maybe a smile.

“It’s like we were in a boy band,” longtime Auburn coach Jeff Graba said. “It took us an hour to get out of Georgia. It's exciting.”

And it's all part of the show in women's college gymnastics, a sport whose profile is rising with every perfect score. Every packed house. Every viral floor routine. Every TV broadcast. Certainly at every university — from Clemson (student population 23,000-plus) to Fisk (less than 1,000) — looking to join a movement that is very much having a moment.

While elite programs have been struggling in recent years — the U.S., Canada, England and Australia are among the countries whose national governing bodies are scrambling to emerge from the cloud of what athletes say is a “toxic culture” — NCAA gymnastics has become a safe space where young women can reclaim control of their careers and in some cases, regain their passion for a sport that can often take far more than it gives.

“It's more like a positive kind of place,” said Lee, who last August became the sixth American to win the Olympic all-around title.

It's one of the main reasons Lee stuck to her commitment to Auburn even after her star turn in Tokyo. The relaxation of name, image and likeness guidelines that let Lee and Olympic teammates Jordan Chiles (UCLA), Jade Carey (Oregon State) and Grace McCallum (Utah) compete in college without forfeiting the chance to cash in on their newfound fame didn't hurt.

The influx of high-profile Olympians truly began after the 2004 games, though Lee is the first Olympic champion to compete collegiately. The boom is fueled by something else, too: Competing in college plays in stark contrast to the elite world of gymnastics emerging from a torrent of allegations of physical, mental and emotional abuse.

“We are sort of the beacon of goodness in our sport right now,” LSU coach Jay Clark said. “Our sport has taken so many negative hits for various reasons over the last 5-6 years, people look at college gymnastics as the saving grace.”

This all comes as outlets like the SEC, Big Ten and ACC Network over the last decade have given women's gymnastics a level of exposure that didn't exist a generation ago.

ABC aired the national championships on broadcast television for the first time in a decade last April. This season, ESPN aired more than 60 hours of gymnastics and ABC televised a regular-season meet for the first time when SEC power Florida hosted Alabama. ABC will also broadcast the NCAA finals on April 16 and this week's four regional meets will all be carried on ESPN-plus, with national semifinals returning to ESPN2 on April 14.

“It just goes to show if you put gymnastics on a place that’s accessible instead of some obscure livestream that’s impossible to find, people are going to watch and support it,” said Michigan senior Natalie Wojcik, who helped the Wolverines capture the program's first NCAA title last spring.

A new approach in the way TV covers the sport has helped. SEC dual meets are packed into taut 90-minute windows on the ESPN-operated SEC Network, with a running score chyron in the corner of the screen to immediately get viewers invested. Throw in school fan base support — a layer the elite level lacks outside of major international competitions — and the ingredients are there to create a connection even if the casual fan wouldn't know the difference between a wolf turn and a Yurchenko full. (Pro tip: wolf turns are spins done on balance beam or floor exercise and Yurchenko full is a vault).

What the casual fan does know, however, is that 10.0 still means perfect. While the International Gymnastics Federation (FIG) — the sport's governing international body — eliminated the 10.0-system in 2006 in favor of one that divides the scores into difficulty and execution and combines the two, the 10.0 remains very much a thing in the NCAA. The idea of attaining perfection is one of the reasons Lee wanted to compete collegiately.

When she received her first 10 for a sublime uneven bars set against LSU in February, the adrenaline rush as she was mobbed by her teammates was real. So was the communal joy.

“We all celebrated it together,” Lee said.

LSU sophomore Livvy Dunne's Instagram and TikTok accounts reach a combined 6.6 million followers and serve, in part, as hype machines for the Tigers. The 19-year-old Dunne understands not everyone who comes to an LSU meet is there because they are focused on the score. She laughs while talking about the young men at a meet this season who wore T-shirts scrawled with invitations to prom on them.

Hey, they're in the building, right? The bars specialist called helping raise awareness of her sport a “mission."

“Bringing it to more fans is incredible,” said Dunne, who averaged 9.834 on uneven bars this season for the Tigers, including two scores of 9.90 or better. “Especially for the future. Hopefully, when I'm not here anymore, the fans will still be around.”

They're certainly there now. LSU led the nation in average attendance (11,691) for the first time in program history while Auburn sold out every home meet this season. Michigan drew a record crowd (12,707) when Lee and the Tigers visited earlier this month. Arkansas moved a home meet to Bud Walton Arena — where the Razorbacks basketball team plays — for the first time when it hosted Auburn.

There have always been strong pockets of support, particularly in places UCLA, Oklahoma, Georgia, Alabama and Utah, but the growth is no longer limited to a select few. The decision by athletes like Lee and Carey — who won gold on floor in Tokyo — to join non-traditional powers helps.

So does aggressive on-campus marketing.

On random Thursday nights, 2011 world champion and 2012 Olympic gold medalist and current Arkansas head coach Jordyn Wieber walks along sorority row and invites young women to meets. She gets far more yesses than she used to.

“One of my major goals was to build the student fan base, at UCLA we had a huge student section,” Wieber said. “I looked at the marketing, how could we make these meets fun for someone who is 60 years old, a mom and dad, a young gymnast and a college student?”

While men's gymnastics at the NCAA level is struggling to survive — there are currently only a dozen Division I programs — women are heading in the opposite direction. Long Island University came on board in 2020. Clemson is aiming for 2024. Fisk University will become the first historically Black college to field a women's gymnastics team when the program launches next season.

It's a far cry from Fisk coach Corrinne Tarver's career at Georgia in the late 1980s. The first Black woman to win an NCAA all-around championship believes she could count the number of women of color in the upper reaches of her sport on one hand, maybe two.

“Honestly when I first went into college gymnastics, I don’t know if there was enough of us to fill an HBCU team,” she said. “There was not a lot.”

Lee, who is Hmong-American, is the third straight American woman of color to win an Olympic title after Gabby Douglas in 2012 and Simone Biles in 2016. Black women account for nearly 10% of the scholarship athletes at the NCAA Division I level, an increase from 7% in 2012.

Fisk offers young gymnasts a chance to be on the ground floor of a sport growing in nearly every tangible way. The proof is in the stands, in the ratings and in the lives of the women who have wrested back control of their sport and in some ways, their lives.

“(They) are literally changing the sport from the inside out," said two-time Olympic medalist Kathy Johnson Clarke, now a commentator for ESPN. "Now it's the way it should be, with the athletes at the center of it guiding our conversations and leading us to where we all need to be."