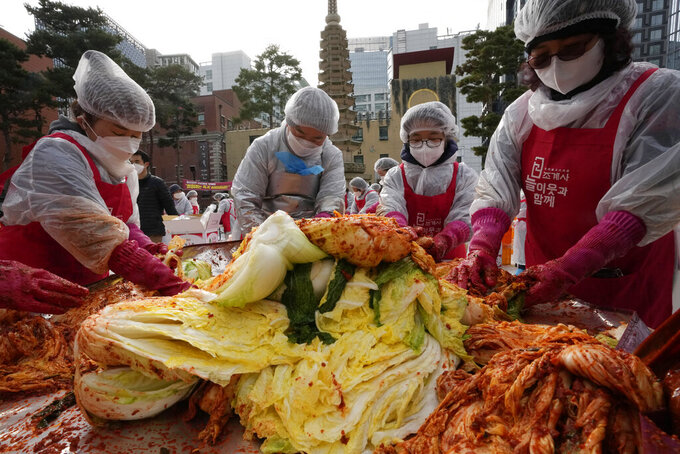 FILE- Volunteers make kimchi, a traditional pungent vegetable dish, to donate to needy neighbors, at a temple in Seoul, South Korea, Thursday, Dec. 2, 2021. Alongside politics, frictions between China and South Korea have long been driven by cultural issues, even including the origin of kimchi, a Korean national dish of fermented cabbage that China claims as its own invention. (AP Photo/Ahn Young-joon, File)

SEOUL, South Korea (AP) — Chinese and South Korean short-track speedskating fans are duking it out online over allegations of foul play, tapping into the historical rivalry between their countries.

South Korea was angered by the disqualifications of two of its short-track speedskaters at the Beijing Games this week. A protest was filed, and South Koreans online called for the team to withdraw in protest.

Instead, they stayed. And Hwang Daeheon won gold in the men’s 1,500 meters on Wednesday, giving South Korea its fourth such title in six Olympics.

Hwang and teammate Lee Juneseo had been disqualified in the semifinals of the 1,000 two days earlier, prompting the South Korean contingent to complain to the International Skating Union and International Olympic Committee.

The tetchiness over a relatively obscure sport underscores the intense competition between the Asian superpower and the scrappy, high-tech democracy that has thrived despite the ever-present threat from China's ally North Korea.

Chinese nationalists say that over the centuries, Koreans have adopted Chinese customs and sought to make them their own. South Koreans say China seeks to diminish their uniqueness and accuse the government of cultural appropriation, most recently at last week's Olympics opening ceremony, when a performer representing China's Korean minority wore the traditional women's national dress known as hanbok.

That set off a howl of protest on the South Korean internet, which was met by an equally vociferous response from Chinese netizens asserting China's cultural dominance and accusing South Korean skaters of deliberately fouling to seek advantage on the track.

While no clear connection has been established, the assault of a Chinese student in the South Korean city of Busan on Wednesday also prompted an unusual statement of concern from China's Foreign Ministry.

“We are paying great attention to the matter," spokesperson Zhao Lijian said Friday. “We will do our best to safeguard the legitimate rights and interests and safety of Chinese citizens overseas."

China has also stirred nationalism with a pair of box office hits lionizing the role of Chinese troops in the 1950-53 Korean War, which ended without a peace treaty. Chinese propaganda paints the U.S. and its allies as the aggressors in the conflict that began after North Korea invaded the south and expanded with China's dispatch of a massive army to aid the North.

Short-track speedskating, a chaotic sport where skaters constantly jostle for position while racing around a tight track with no lanes, has long been plagued by bitter judging disputes.

But tempers had rarely reached the levels of South Korea’s national outrage this week. The reaction underscored the pent-up frustrations from years of disputes over history and culture — and echoed broader unease about China's growing military and economic influence.

South Korea had entered the Beijing Games with a record 24 gold medals in past Olympic competitions, more than double China’s 10 golds. But the disqualifications of Hwang and Lee, both penalized for illegal contact, ensured a slow start for South Korea.

The skating dispute crossed over into politics as South Korean presidential candidates, locked in heated campaigns ahead of a March vote, called out the Olympic hosts for allegedly stealing medals in a sport the country has proudly dominated for years.

Yet the Embassy was also quick to congratulate Hwang over his 1,500-meter win and said the people of China have “positive” views about his “excellent skills.”

The ruling Communist Party newspaper Global Times sought to downplay the dispute, while also pointing to South Korean anxieties over “regional geopolitics as well as the reliance on the U.S. for security."

“Some shift this sentiment toward China, which is why minor incidents sometimes escalate," the paper said in an editorial Friday.

South Korea and China developed close ties driven by trade since the early 1990s, but relations have deteriorated in recent years as Beijing became more assertive toward its neighbors while competing with Washington for regional influence.

Bilateral relations took a significant hit in 2017 when South Korea installed an advanced U.S. missile defense system to counter nuclear and missile threats from North Korea. The decision angered China, which claimed that the anti-missile system in South Korea could be reconfigured to peep into its territory.

Beijing retaliated by suspending Chinese group tours to South Korea and obliterating the China business of South Korean supermarket giant Lotte, which had provided land for the missile system.

Alongside politics, frictions have long been driven by cultural issues, even including the origin of kimchi, a Korean national dish of fermented cabbage that China claims as its own concoction.

The sides also have an ongoing dispute over the history of ancient kingdoms whose territories stretched from the Korean Peninsula to Manchuria.

South Koreans see these kingdoms as Korean, but China began to claim them as part of its national history in the early 1980s. Experts say Beijing’s intent was to provide ideological support for its policies governing ethnic minorities, including the approximately two million ethnic Koreans living in northeastern China.

In the heat of the presidential campaign, candidate Lee Jae-myung of the ruling Democratic Party warned China against usurping Korean culture.

His campaign spokesman linked the hanbok-wearing performer at the opening ceremony with South Koreans’ anger over a Chinese government-backed academic project launched in the early 2000s, which produced a series of studies arguing the kingdoms of Goguryeo (37 B.C.-A.D. 668) and Balhae (698–926) were Chinese.