Beijing Olympics a step up for those in NHL playoff bubbles 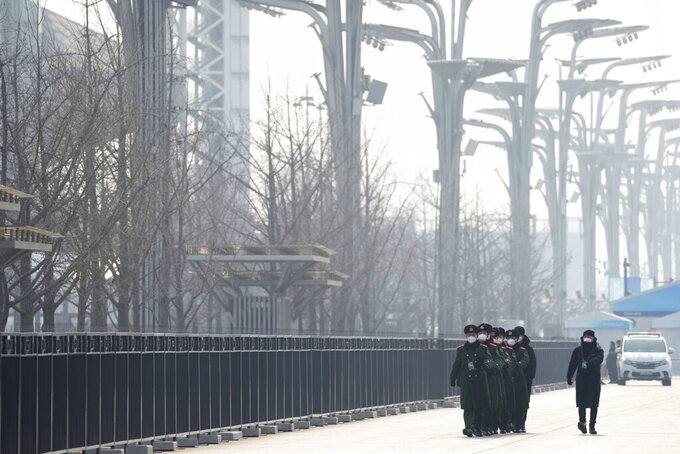 FILE - Chinese paramilitary police walk in formation on the Olympic Green near the edge of the closed-loop area at the 2022 Winter Olympics in Beijing, Jan. 30, 2022. (AP Photo/Mark Schiefelbein, File)

BEIJING (AP) — Jordan Weal is happy to have more outside space than just a sidewalk. Leo Komarov is glad there's more to do outside of playing hockey. Eric Staal just likes the atmosphere better.

Being confined to the bubble in Beijing may be new for some Olympians, but it's a familiar feeling for the dozen hockey players and two coaches who were in one of the NHL’s playoff bubbles in Toronto and Edmonton in 2020. Based on the extra space and ability to see other athletes and different sports, it might even be an improvement.

"Yeah, this is better," said Staal, Canada's captain who was in the Edmonton bubble with the Minnesota Wild. “You’re with your team and you get to walk about in the bubble, and the NHL was a little tougher with the hallways and the walls in the streets and just only in hotels, so a little bit different, for sure. This has got a lot better feel."

The Olympic bubble is different in many ways, most notably that it's almost two years into the pandemic and almost everyone involved is vaccinated. It's also a much shorter period of time: roughly three weeks until the gold-medal game, while the Tampa Bay Lightning and Dallas Stars spent 65 days quarantined until the end of the Stanley Cup Final.

This time there are some fans, though with fewer than 1,000 selected guests in the building, games are almost as quiet as empty Scotiabank Arena and Rogers Place when host China isn't on the ice. There's still daily virus testing and mask-wearing.

“It is mentally tough on everyone, but it’s what it is," said Weal, who was in Toronto with the Montreal Canadiens. "It’s the world right now, and hopefully as soon as we can, we can get out of this and start moving forward, getting society back to the way it was.”

Some of the feelings about the Beijing bubble depend on which bubble and hotel players were in. Those at the Fairmount Royal York in Toronto like Weal and Canada coach Claude Julien at the JW Marriott in Edmonton had far less space than those at Hotel X in Toronto, which had a passageway to the soccer stadium to hang out and run around on grass.

“We weren’t allowed to go outdoors,” said Finland defenseman Sami Vatanen, who was at the Royal York with the Carolina Hurricanes. “There was a little area like this where you could go outside, but here you can take walks and you can ride bikes or you can go run. You can do almost whatever you like outdoors, so it’s good. I think we have a little more room anyways in here than we had in Toronto.”

Sweden's Lucas Wallmark, who was in Toronto with the Florida Panthers, said the food was better in the NHL bubble, which had Tim Hortons coffee trucks among the options. Olympic teammate Joakim Nordstrom, who was in Toronto with the Boston Bruins at Hotel X, also pointed out, “There was still a restaurant or a bar open that you could go for a beer.”

No such luck in Beijing, which does not have alcohol available inside the village.

“But you can bring some stuff here if you want,” Vatanen said.

More than a decade since then-Philadelphia Flyers coach Peter Laviolette instituted an alcohol policy that players called “dry island," that would aptly describe the experience at this year's Olympics. Czech star David Krejci, who was teammates with Nordstrom on the Bruins, said, “You don’t have a bar, you don’t have much alcohol, but that’s not why we’re here.”

Players are in Beijing to try to win a gold medal, so the motivation is similar to chasing the Stanley Cup. U.S. coach David Quinn, who was in Toronto with the New York Rangers, said present day athletes are used to going into bubbles now, 23 months into the pandemic — and there's almost universal agreement that it's a small price to pay to play at the Olympics.

“That’s why you compete every day,” Wallmark said. “You want to win. If you have to go through a bubble or whatever, it’s worth it. And if you win, it’s a really cool experience and it’s something I would say almost everyone would go through it to have the chance to win.”