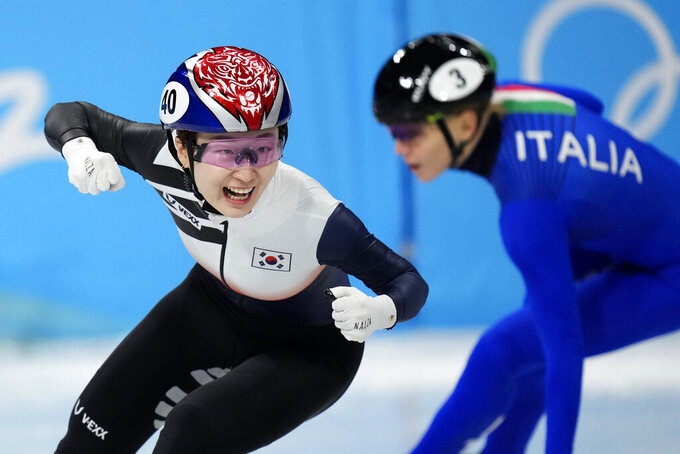 BEIJING (AP) — Choi Minjeong was a teenager competing in her first Olympics four years ago in her home country. She won two golds and began burnishing a reputation as one of South Korea's best short track speedskaters.

Choi lived up to her reputation in Beijing, successfully defending her Olympic title in the 1,500-meter final on Wednesday.

She won in 2 minutes, 17.789 seconds, extending the tradition of Asian dominance in the event.

“Last time I wasn't experienced and I had never competed in any major events," Choi said through an interpreter. "This time I came to keep first place.”

She did so by defeating two of the sport's biggest names.

Arianna Fontana of Italy took silver by two-thousandths of a second over world champion Suzanne Schulting of the Netherlands.

“Arianna and Choi and I all defend our titles from the last Olympics and I think that’s really super special,” Schulting said. “We can be really proud.”

It was Fontana’s 11th career Olympic medal and third in Beijing. The most decorated short track skater in history also won the 500 and took silver in the mixed team relay.

“I wanted to finish good and be in a really good mood,” said Fontana, who isn't ruling out an appearance at the 2026 games in her home country. She made her Olympic debut in 2006 in Turin.

Choi skated even faster in the semifinals, zooming from sixth and circling the field on the outside to take the lead with two laps remaining. She set an Olympic record of 2:16.831 to go with her world record from 2016. Choi won her quarterfinal by a large margin, too.

Canada won the men's 5,000 relay on the final night of short track at Capital Indoor Stadium.

Charles Hamelin, Steven Dubois, Jordan Pierre-Gilles and Pascal Dion skated cleanly to take the gold medal in the 45-lap race with a time of 6:41.257.

“I saw on the last two exchanges that there were some small gaps and thought, ‘This is it,’” said Dubois, who crossed the finish line and raised his arms in triumph. “This means so much to everyone because it shows we’re the best team.”

At age 37, Hamelin broke his own record as the oldest male short track skater to win an Olympic medal. It was the sixth of his career in his fifth Winter Games.

“I don’t feel like I’m 37 years old. I’m still doing what I love the most. That’s the reason why I’m still here,” Hamelin said. “I just want to work hard and prove to everybody in the world if you still believe in yourself and you still have dreams that you can win the competition.”

Dubois won his third medal in Beijing. He finished second in the 1,500 and third in the 500.

“I’m so happy to finally have a big event and show that I’m good,” Dubois said.

Sun Long of China crashed later in the relay, much to the dismay of the fans, who waved the host country’s flag and chanted encouragement. The Chinese won four medals, including golds in the men's 1,000 by Ren Ziwei and in the debut of mixed team relay.