Hammer thrower changes nation to US, makes final at worlds 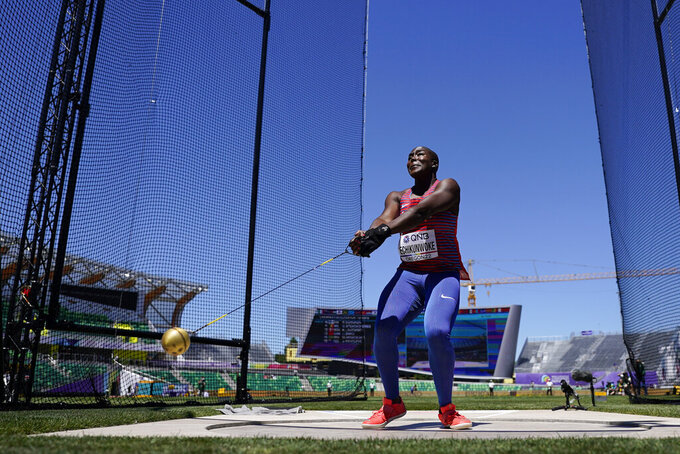 EUGENE, Ore. (AP) — A few days before the hammer thrower from Ohio was scheduled to compete and represent Nigeria at the Tokyo Olympics, she was informed she couldn't.

Over a federation error concerning drug testing. On her 25th birthday.

No chance to walk at opening ceremonies, either (her team uniform didn’t arrive in time). The only memory was a pretend practice throw inside the Olympic hammer ring.

It all led her to this: Switching countries, an arduous task with her application finally coming through at the last minute before the U.S. nationals. She earned a spot at the world championships, where she'll wear the red, white and blue.

Which is why she celebrated in an All-American way when she qualified: A juicy burger and fries at a fast food restaurant (no milkshake, though, she’s dairy-free).

“It honestly feels very redemptive,” Echikunwoke said of making Team USA as she qualified Friday for the final of the hammer throw at the world championships with an mark of 238 feet, 2 inches (72.60 meters). “I’m just so grateful.”

Echikunwoke (pronounced: eh-CHI-koo-wokay) grew up in Pickerington, Ohio, the oldest of four kids. Her dad, Godwin, works for the state government as an auditor. Her mom, Christiana, is a nurse. Both are from Nigeria.

Family pride. That's why the standout thrower from the University of Cincinnati decided to wear the green-and-white of Nigeria last summer in Tokyo. She earned a spot by winning her country's trials.

First, a rumbling that something might be amiss as the Nigerian team trained outside the city a few day before the Summer Games. Paperwork problems with drug testing leading into the Olympics, they were hearing. Still needed to be sorted out.

“I was like, ‘No way this is happening,’” Echikunwoke said.

As an NCAA athlete, she said she wasn't drug tested that frequently, just when she won at the national indoor championships in 2017. But with others in a similar situation, she reasoned it would all be sorted out.

“Not once” she said, when asked if something felt amiss. “That’s the crazy part: I feel like I usually have a premonition if something is off.”

That's why the ultimate decision blindsided her: She was disqualified by the Athletics Integrity Unit, which oversees the antidoping effort in track and field. There were 20 athletes, including 10 from Nigeria, who weren’t allowed to participate in track and field at the Olympics because they did not meet antidoping testing requirements in the lead-up to the Games.

The AIU requires athletes from countries categorized as “high risk” because of deficiencies in their testing programs to be given three no-notice, out-of-competition tests in the 10 months leading to a major event.

Echikunwoke explained that the Athletics Federation of Nigeria (AFN) didn't set up the proper testing for its athletes. She said, in an Instagram post, they “left us in the dark about this whole drug testing issue until the last minute where we were left helpless.”

The AFN didn't respond to emails from The Associated Press.

“I would definitely consider it probably the most traumatic experience of my life,” she said. “Because it was just very unexpected.”

Echikunwoke — whose name translates into “leader of men” — went to counseling to come to terms with the heartbreak. Mom helped, too.

“She was like, ‘You need to forgive them. ... You’re the one holding on to that anger and that bitterness toward them,’” Echikunwoke said. “That helped me tremendously.’”

Around December, she reached out to World Athletics, the governing body for the sport, to notify them of her plans to switch nations to the U.S. The paperwork, she figured, would be straightforward.

Not so. She waited and waited.

In the meantime, she trained — hoping to be approved in time for U.S. championships, which were still months away. But the closer the event got, the more anxious she and her coach, Susan Seaton, became.

“There were days where she was a little bit doubtful about it and I cheered her back up,” said Seaton, the director of cross country/track & field at Cincinnati. “Then there were days where I was kind of losing some faith over all these holdups and paperwork and everything and she would cheer me up. We just kind of kept each other sane and said, ‘Hey, worst-case scenario, we’re getting better.'”

Official word she'd been approved to compete arrived early on June 22 — a day before she was supposed to compete in the nationals in Eugene.

Echikunwoke boarded a flight from Ohio to Oregon and arrived that night. She showed up the next day eager to earn a spot on her new team.

Her second throw of the competition went 242 feet (73.76 meters), which was good enough for third place and a spot at worlds for Team USA.

“She wanted to make sure that the world can see what she’s capable of,” Seaton said of Echikunwoke, who earned a spot in the final Sunday. “Because she got so close to the (Olympic) dream that every athlete has at some point. That got taken away from her, the opportunity to compete and measure yourself against the best in the world."

To celebrate a year-long, emotionally draining journey, she went the burger and fries route after the nationals. The funny thing: It was actually the meal she wanted on her recruiting trip to Cincinnati years ago, with Seaton and her family pushing for pasta instead.

“A full-circle moment,” Echikunwoke said of the burger experience, along with representing a new nation at a major meet. “I’m excited — excited to represent Team USA.”