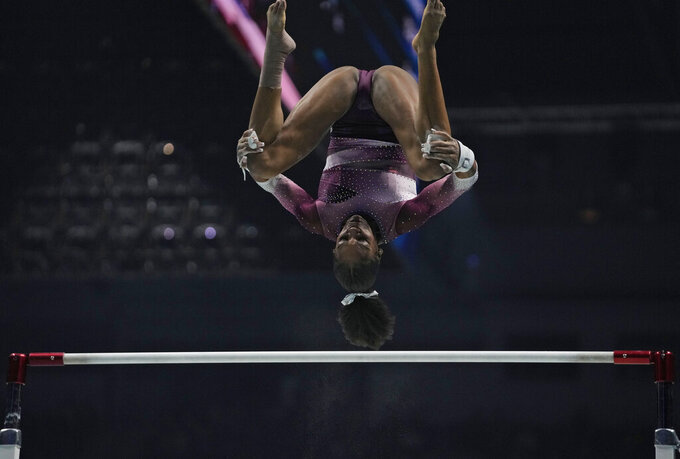 LIVERPOOL, England (AP) — Jade Carey's rebound from Olympic disappointment in her best event ended with a gold medal at the world championships.

The 22-year-old American soared to victory in the women's vault final on Saturday, giving her a second trip to the top of the podium at M&S Bank Arena after helping the U.S. women capture the team gold earlier in the meet.

Carey's average score of 14.516 for her two vaults was just enough to edge teammate and fellow 2020 Olympian Jordan Chiles. Chiles' 14.350 average was good enough for silver, just ahead of Coline Devillard of France at 14.166.

The victory helped ease the sting from a terrifying trip down the vault runway at the 2020 Olympics when a sticky patch of carpet caused her to trip and cost her a shot at a medal. Carey recovered quickly to win a surprising gold on floor exercise the next day but arrived in England eager to showcase her dynamic skills on an event where her combination of power and precision thrives.

“I ended up getting eighth (in Tokyo), so here today actually completing both vaults successfully and landing both on my feet felt like an amazing feeling,” Carey said. "I’m proud of myself for bouncing back.”

Chiles, part of the U.S. team that claimed silver in Tokyo, earned her first individual world championship medal with two excellent vaults that would have won a lot of meets, just not one with Carey also in the field.

“This is only my second final ever as a senior so to come back with a silver is awesome,” said Chiles, who later added, "In my mind, my second is a first because Jade is a phenomenal vaulter.”

Shilese Jones of the U.S. added a third medal at the world championships by earning a silver on uneven bars to go with the team gold and a silver in the all-around. Jones' set scored a 14.766, trailing only two-time world champion Wei Xiaoyuan of China at 14.966 and just ahead of Olympic champion Nina Derwael of Belgium at 14.700.

“I have worked so hard for this and I’m just super stoked and super proud,” Jones said. "I know what I’m capable of so there was no doubt in my mind.”

Giarnni Regini-Moran of Britain gave the hosts their first gold medal at the world championships in men's floor exercise with a score of 14.533, followed by world and Olympic all-around champion Daiki Hashimoto of Japan. Hashimoto's teammate Ryosuke Doi earned the bronze.

Rhys McClenaghan of Ireland gave his country its first gold medal at a world championship by winning pommel horse with a score of 15.300. Ahmad Abu Al-Soud's silver medal was the first medal of any color by a men's gymnast from Jordan. Harutyun Merdinyan of Armenia, at 38 the oldest athlete in the field, captured the bronze.