Kenny scores cycling gold for Brits, Valente same for US 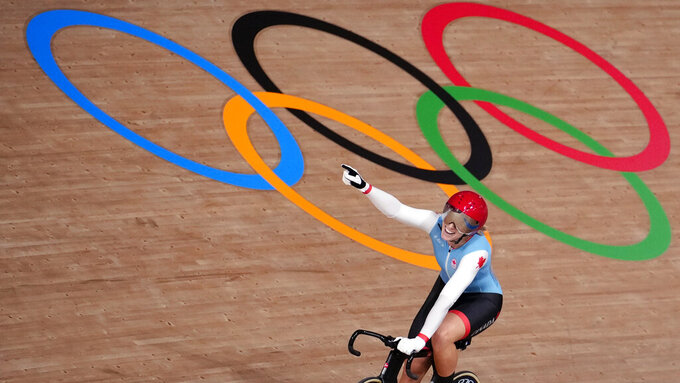 IZU, Japan (AP) — Jason Kenny won a record-setting gold medal for Britain on the final day of track cycling at the Tokyo Olympics.

Jennifer Valente and Kelsey Mitchell each scored gold every bit as special for their countries.

Valente gave the hard-luck American cycling team a reason to hold their heads high Sunday when she got up from a crash in the omnium-ending points race to secure her win, while Mitchell won a surprising sprint gold for Canada.

“It’s special,” Kenny said after his win in the keirin, “to get any gold medals at the end of the day.”

Valente and Mitchell come from countries with little track cycling tradition, though. Kenny comes from a nation that has dominated the Olympics ever since the 2008 Beijing Games, when he won the first of his gold medals.

So the focus in the velodrome was naturally on Kenny, who had come out of retirement for the Tokyo Games but had been lamenting his form, especially after he missed out on a medal entirely in the men’s sprint.

After winning his semifinal Sunday, Kenny slotted in behind the motorized pacing bike for the first three laps of the finals. He began his sprint the moment the derny ducked off the track, and nobody seemed willing to react to his audacious flyer. That left him all alone with a near-quarter lap lead all the way to the finish line.

“We said before the race, if they’re asleep, should I just launch one?” Kenny said. “It was just too big of an opportunity.”

The rest of the field was left sprinting for the runner-up medals, and Azizulhasni Awang of Malaysia beat Olympic sprint champion Harrie Lavreysen of the Netherlands with a bike throw at the line to take silver.

“At this moment I’m not really happy with it,” Lavreysen said. “It doesn’t feel like I made a mistake (to leave Kenny) in front, but I couldn’t do anything about it. That makes me feel a bit stupid, but that’s keirin.”

It was a less successful day for Kenny’s wife, Laura, who was favored for omnium gold after taking the multidiscipline event the first two times it was contested in the Olympics. Kenny won the women’s Madison with Katie Archibald earlier in the Tokyo Games, and she had added a team pursuit silver medal to her previous two golds.

Yet what could be her final day in an Olympic velodrome began in the worst way possible.

Italian rider Elisa Balsamo hit Emily Kay of Ireland as they began the final lap of the scratch race, the first event of the omnium, triggering a massive front-stretch pile-up that brought down seven riders — Kenny among them.

With the riders and their bikes tangled in a heap on the track apron, Valente seized the opportunity and outsprinted Yumi Kajihara and Annette Edmondson to win the race for maximum points.

Kenny took seven points to win the tempo race but, more importantly, Edmondson and several other contenders lost 20 points when Valente and Co. went on the attack and caused them to lose a lap.

Kenny’s medal hopes were — fittingly — eliminated in the elimination race, where she was the seventh rider out. Kajihara finished second behind Clara Copponi of France to move within two points of Valente with only the points race left.

In the final race of the entire Olympic cycling program, Valente won the first sprint in the points race to pad her lead, then got up from a crash with 30 laps left to keep from losing any ground on her closest pursuers. She wound up taking second in the final sprint to secure the gold medal — then broke down in tears when she got off her bike.

So much for that.

Starikova, who had already upset reigning bronze medalist Katy Marchant to reach the semifinals, swept past Lee in their match. And Mitchell, who beat Lauriane Genest in their all-Canada quarterfinal, beat Hinze in their best-of-three decider.

Mitchell led wire-to-wire against Starikova in the first of their best-of-three final. Then, she held Starikova off in a drag race to the finish to win Canada’s second gold in the event after Lori-Ann Muenzer’s at the 2004 Athens Games.

Lee easily swept through Hinze to win the bronze medal.

“The past year and a half has been very up and down with the postponement of the Olympics and not being able to race,” Mitchell said, “but I have incredible teammates, an incredible coach, staff around me. Everyone is so supportive, and all my friends and family back home. I knew all the hard work would pay off.”