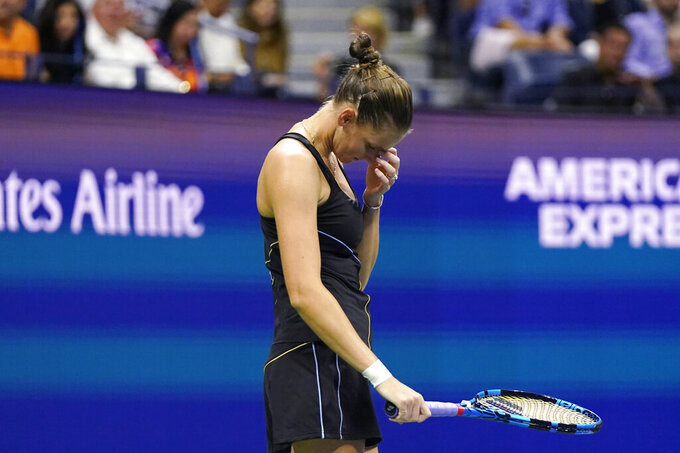 Karolina Pliskova, of the Czech Republic, reacts after missing a shot to Maria Sakkari, of Greece, during the quarterfinals of the U.S. Open tennis tournament Wednesday, Sept. 8, 2021, in New York. (AP Photo/Frank Franklin II)

Novak Djokovic will take his Grand Slam bid into the U.S. Open semifinals.

Just as he did in the Wimbledon final, Djokovic had no problem turning around the match against the No. 6-seeded Italian after dropping the first set.

He will play No. 4 seed Alexander Zverev, who beat Djokovic last month in the semifinals of the Olympics.

Novak Djokovic has won two straight sets to put himself on the verge of the U.S. Open semifinals.

Djokovic is bidding for a 26th straight victory in Grand Slam matches, which would equal his third-longest streak. A semifinal spot against Olympic gold medalist Alexander Zverev awaits if he can get it.

The roof at Arthur Ashe Stadium was closed during the set with an expected storm moving into the area.

Novak Djokovic has evened his quarterfinal match against Matteo Berrettini at one set apiece.

The top-seeded Djokovic broke serve for the first time for a 3-1 lead, then broke again to end the set.

Novak Djokovic will have to come from behind for the third straight match to keep his Grand Slam hopes alive.

Djokovic has lost the first set eight times in his 25-match winning streak in the majors, including when he beat Berrettini in the Wimbledon final for his men's record-tying 20th Grand Slam title.

Kei Nishikori and Jenson Brooksby also took the first set from Djokovic in the previous two rounds in Flushing Meadows.

Novak Djokovic is on the court against a player he has gotten to know well during his run of three straight Grand Slam titles this year.

The top-ranked Djokovic is facing No. 6 seed Matteo Berrettini of Italy, who he has defeated twice this year.

Djokovic beat Berrettini in the quarterfinals of the French Open, then again in the Wimbledon final for his men's record-tying 20th major title.

Djokovic needs three wins for the first calendar-year Grand Slam by a man since 1969.

Maria Sakkari has reached her second Grand Slam semifinal of the year by beating fourth-seeded Karolina Pliskova 6-4, 6-4 at the U.S. Open.

The 17th-seeded Sakkari never made it past the fourth round in 20 appearances at major tournaments until getting to the final four at the French Open in June.

She’s now equaled that showing and become the first Greek woman to make it this far at the U.S. Open.

Sakkari never faced a break point Wednesday night and wound up with nearly twice as many winners, 23, as unforced errors, 12.

The 26-year-old Sakkari will face 18-year-old qualifier Emma Raducanu of Britain on Thursday for a berth in the championship match.

Pliskova is a former No. 1 and two-time major runner-up, including at Wimbledon in July.

Lloyd Harris is leaving the U.S. Open, but not New York.

“Actually, I have Davis Cup next week,” Harris said. “We’re playing here in New York. I’ll be here for a little bit longer.”

The South Africans will face Venezuela on Sept. 18-19 at the West Side Tennis Club in Forest Hills, which was the former home of the U.S. Open.

The World Group II tie was originally set for Venezuela before moved to a neutral site for safety reasons. South Africa will be considered the host nation.

Harris will hope to regain the form that carried him to victories over Olympic silver medalist Karen Khachanov, No. 7 seed Denis Shapovalov and Reilly Opelka during his best showing in a Grand Slam tournament.

“I think hopefully this is just the start of big things," he said.

Coco Gauff and Caty McNally knocked off the top-seeded team of Elise Mertens and Hsieh Su-wei to reach the women's doubles semifinals.

With Leylah Fernandez and Emma Raducanu in the women's singles semifinals, Gauff 17, and McNally, 19, added to the success of teenagers in the U.S. Open.

They will play the fifth-seeded team of Gabriela Dabrowski of Canada and Luisa Stefani of Brazil.

Olympic gold medalist Alexander Zverev has made it back to the U.S. Open semifinals a year after finishing as the runner-up at the hard-court Grand Slam tournament.

The 24-year-old from Germany saved a set point in the opener and wound up beating unseeded Lloyd Harris 7-6 (6), 6-3, 6-4 at Arthur Ashe Stadium on Wednesday.

The No. 4-seeded Zverev will take a 16-match winning streak into his match against either Novak Djokovic or Matteo Berrettini in the final four on Friday.

Zverev lost to Dominic Thiem in a fifth-set tiebreaker in last year’s championship match at Flushing Meadows after taking the first two sets.

In the quarterfinals on Wednesday, Harris broke to lead 5-3 in the first set and served for the set but got broken. Then in the tiebreaker, he held a set point at 6-5 but he missed a forehand and dropped the next two points, too, to cede the set.

The 46th-ranked Harris, a 24-year-old from South Africa, had eliminated three seeded opponents — No. 7 Denis Shapovalov, No. 22 Reilly Opelka and No. 25 Karen Khachanov — to reach his first Grand Slam quarterfinal.

The 18-year-old qualifier from Britain joined Leylah Fernandez of Canada, who earned her semifinal spot Tuesday, a day after her 19th birthday.

Raducanu fell behind early 3-1 but the quarterfinal match turned when she broke the 11th-seeded Bencic — who had lost serve only three times in four rounds — to even it at 3 during her run of five straight games.

The 150th-ranked Raducanu followed Billie Jean King in 1979 and 2009 champion Kim Clijsters as the only women outside the top 100 of the rankings to reach the U.S. Open semifinals.

She wasn't even ranked inside the top 350 just three months ago before a run to the fourth round of Wimbledon. Raducanu will play No. 4 Karolina Pliskova or 17th-seeded Maria Sakkari in the semifinals.

Emma Raducanu is trying to become the second teenager in the women's semifinals at the U.S. Open.

The 18-year-old from Britain is playing Olympic gold medalist Belinda Bencic to start the second day of quarterfinal action.

Novak Djokovic faces Matteo Berrettini in a night match, hoping to move within two victories of a calendar-year Grand Slam.

Raducanu, who played her way into the tournament through the qualifying rounds, is trying to join 19-year-old Leylah Fernandez of Canada in the final four.

Ranked 150th, Raducanu can follow Billie Jean King in 1979 and Kim Clijsters in 2009 — who won the title — as the only women outside the top 100 of the rankings to reach the U.S. Open semifinals.

No. 4 seed Karolina Pliskova, the 2006 U.S. Open runner-up, plays No. 17 seed Maria Sakkari in the other women's quarterfinal.

Djokovic beat Berrettini at Wimbledon for his 20th Grand Slam title, tying Roger Federer and Rafael Nadal for most among men.