Marathon mom: Tuliamuk on track after having baby in January 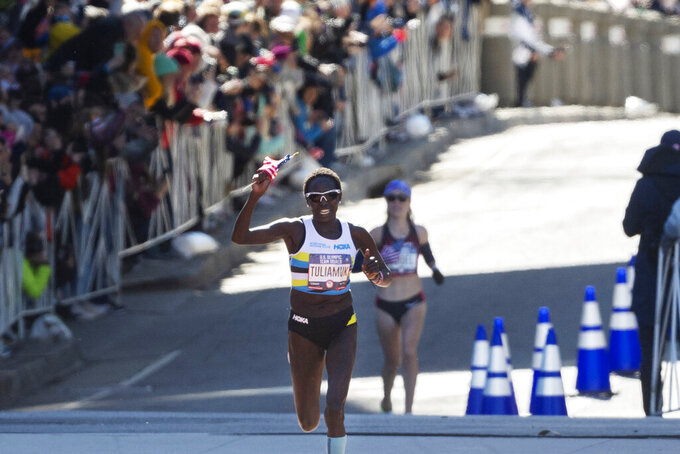 FILE - In this Feb. 29, 2020, file photo, first place finisher Aliphine Tuliamuk leads second place finisher Molly Seidel to the finish in the U.S. Olympic marathon trials in Atlanta. Tuliamuk will have company in Tokyo with her baby, Zoe, allowed to travel with her. The original plan was to start a family after the Tokyo Olympics. But when the Summer Games were postponed by the pandemic, the 32-year-old Tuliamuk and her fiance, Tim Gannon, decided not to wait. (AP Photo/John Amis, File)

TOKYO (AP) — Sometimes, her workouts on an exercise machine were cut short when Zoe started crying.

Sometimes, she stayed up late when Zoe was fussy, even though she had an early morning run.

Baby steps, she told herself.

By taking it slow and steady — advice from other long-distance running moms — Tuliamuk worked her way back after giving birth in January. All the way back to where she will be Saturday — the starting line for the women's marathon in Sapporo for the Tokyo Games.

She was cleared to have a cheerleader, too — nearly 7-month-old Zoe Cherotich Gannon (she has a visa). This after helping push organizers to allow breastfeeding mothers to be allowed to take their babies to the Olympics.

“It worked out," Tuliamuk said, "perfectly.”

The original plan was to start a family after the Tokyo Olympics in 2020. But when the Summer Games were postponed by the pandemic, the 32-year-old Tuliamuk and her fiancé, Tim Gannon, decided not to wait. She had a spot on the team thanks to her win at the U.S. marathon trials on Feb. 29, 2020, just days before the coronavirus shut things down.

She knows now just how fortunate she was to make it back in such a short time. Everything went according to plan with the pregnancy and the delivery on Jan. 13. The recovery as well. The only adjustment? Workouts are on Zoe time.

“I look back now and I realize how naive I was,” Tuliamuk said. “I was very naive to think I would just get pregnant right away, I’d be able to run through my pregnancy, then I’d be able to come back really fast. Those are things that I didn’t know, but I also got very lucky."

Following her daughter’s birth, she didn't start running until around eight weeks later. From there, she eased back into it. That was on the advice of her doctor, her physical therapist and by drawing inspiration from runners/moms such as Kara Goucher and Alysia Montano.

Tuliamuk got creative with her workouts, putting Zoe next to her as she got in a few minutes on an elliptical machine before stopping to feed her.

Anything to start Tuliamuk on the path back.

“When she goes to sleep, I’d put her back to bed and go back and finish a workout — even if I’m really tired and don’t feel like training anymore,” said Tuliamuk, who divides her time between Santa Fe, New Mexico, and Flagstaff, Arizona. “I’m like, ‘I have to do this.’ At night, sleep’s not guaranteed. I have to wake up and go run, feeling like a zombie.”

Her first race back was July 4 in Atlanta. A 10K that produced a time of 32 minutes, 41 seconds and a sixth-place finish.

It just affirmed something she knew — she was on the right path. Because that time was actually faster — by about eight seconds — than her winning time in 2017.

“So far, so good,” said Tuliamuk, one of 32 siblings, all of whom shared a father. “It’s harder than usual but I’m not injured, so that’s a good thing. It’s just having the sense that I’m coming back from being out of shape. But I’m really loving it. I’m loving the pain.”

Tuliamuk did her last big buildup session a few weeks ago — 15 miles at 5:41 pace.

“I don’t know what this means for my race but I am very optimistic,” she said in a post on social media.

This certainly lifted her spirits: Zoe recently received her visa to travel to Japan, where the Olympic marathons will be held in Sapporo because of heat concerns in Tokyo.

In late June, the International Olympic Committee announced that nursing mothers were allowed to bring their babies to Tokyo.

“What a relief it feels not to have to imagine my breastfeeding daughter being miles away from me,” she posted. “Thank you to IOC and the host country of Japan for making sure that nursing moms didn’t have to choose between their babies and their careers.”

Born in Kenya, Tuliamuk used to run around eight miles a day in her remote village. In grade school, she began to take it serious. Her talent was obvious, winning races even if she didn't have running shoes.

On one occasion, she met Kenyan marathoner Tegla Loroupe, who happened to be giving a talk at Tuliamuk's school and was told of her talent. She gave Tuliamuk a pair of racing shoes.

Only, Tuliamuk didn’t wear them all that often — they looked too nice.

She was recruited to run at Iowa State before transferring to Wichita State, where she set numerous school records.

One of her proudest moments was in April 2016, when she became an American citizen.

“The national anthem was sung and I remember crying,” she said.

She’s hoping to hear the song again — in Sapporo.

“If that was to happen that would be the highlight of my entire career so far,” Tuliamuk said. "It would mean the world to me.”