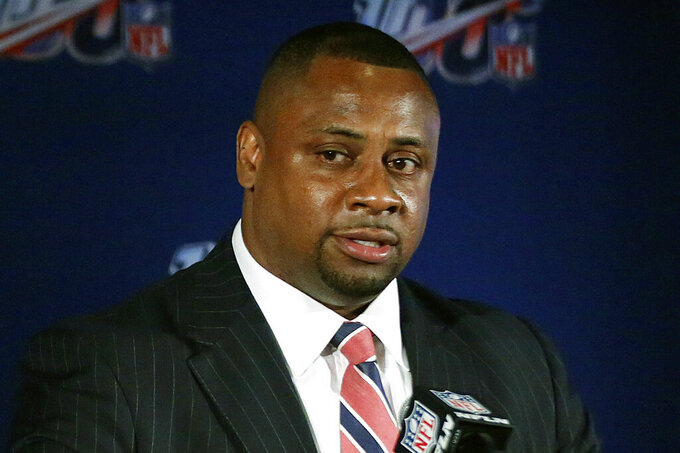 FILE - In this May 22, 2019, file photo, Troy Vincent, NFL executive vice president of football operations, speaks to the media during the owners meetings in Key Biscayne, Fla. Flag football will be played at an international, multi-sport event for the first time next week during the World Games in Birmingham, Alabama. The NFL may be the sport’s biggest cheerleader. “When we talk about the future of the game of football, it is, no question, flag,” NFL executive Troy Vincent told The Associated Press. (AP Photo/Brynn Anderson, File)

Flag football will be played at an international, multi-sport event for the first time next week during the World Games in Birmingham, Alabama.

The NFL may be the sport’s biggest cheerleader.

“When we talk about the future of the game of football, it is, no question, flag,” NFL executive Troy Vincent told The Associated Press. “When I’ve been asked over the last 24 months, in particular, what does the next 100 years look like when you look at football, not professional football, it’s flag. It’s the inclusion and the true motto of ‘football for all.’ There is a place in flag football for all.”

Vincent points to the growing number of men and women playing flag football globally. He’s encouraged that six states — Arkansas, Arizona, Florida, Georgia, Nevada and New York — have sanctioned flag football as a varsity sport in high school with 20 more states interested or in the process of piloting to get it sanctioned.

Multiple NFL clubs support high schools in their respective states with helping fund the initiative. The Atlanta Falcons unveiled a girls flag wall in their stadium in May. The league says 450 schools, and more than 10,000 girls participate in flag football across the country.

It was an important step when the National Association of Intercollegiate Athletics declared women’s flag football as an emerging sport in 2020. The National Junior College Athletic Association did the same.

“It’s a cost-effective sport feasible for all to play,” Vincent said.

The NFL partnered with the International Federation of American Football to bring flag football to The World Games with an eye on the 2028 Olympics in Los Angeles.

Sixteen of the world’s best flag football teams will compete for gold for the first time at The World Games kicking off Sunday at Birmingham’s historic Legion Field. Flag football is one of 33 sports in the program at the Olympic-style, multi-sport event, following its inclusion by the International World Games Association in 2020.

“We are thrilled to have flag football join the official sports program at The World Games for the first time,” IFAF President Pierre Trochet said in a statement. “This is a milestone in the sport’s development and a fantastic opportunity to showcase flag as a truly world-class, international sport.

The World Games are back in the United States for the first time since 1981. The United States men’s and women’s teams both pre-qualified for the tournament by winning gold at the 2021 IFAF Flag World Championships held in Jerusalem last December. A record 39 national teams across four continents competed. The remaining 14 teams earned their place through IFAF’s international qualifying process.

“This is not something that we dominate because it’s football, the national pastime in America,” Vincent said. “You watch these young ladies and men play in other countries. They come to play. It’s a transitional sport. It’s a cross-functional sport. The best flag players come from soccer, lacrosse, cricket because these are men and women who have tremendous agility. It’s a fast-paced game played in space. You don’t have to play it for years and years. You can develop. You can transfer those skills that you learned in soccer, lacrosse, cricket to flag football.”