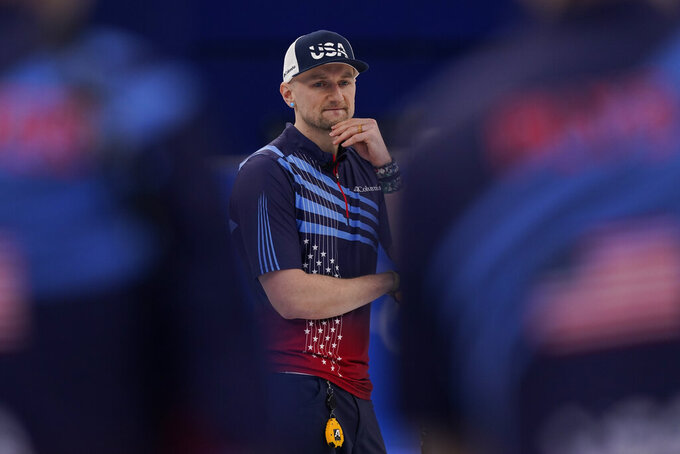 BEIJING (AP) — American alternate Colin Hufman was in his usual spot on the coaches' bench, watching the U.S. men’s curling team fall further behind Canada, when skip John Shuster looked his way and said, “We’re going to have you get in.”

"I had to run to the locker room to grab my shoes. I was like, ‘All right, here we go,’” Hufman said Sunday after making his Olympic debut in the 10-5 round-robin loss. “I actually didn’t expect it at all.”

As the fifth man on a four-man team, Hufman’s only chance to throw a stone so far at the Ice Cube curling venue had been during the 10 minutes of practice allotted to each team each night. The alternate also helps out the coaches by charting shots during matches.

But when Brad Gushue's Canadians opened a 7-1 lead by the fifth-end break, Shuster figured it was time and subbed Hufman for lead John Landsteiner. Canada also called in its alternate, bringing in Marc Kennedy for Brett Gallant.

“Your percent chance of winning when you’re playing Brad Gushue down 7-1 is essentially zero,” Shuster said. “To get Landsteiner a tiny bit of a break and to get Colin Hufman an opportunity to get on the ice at the Olympic Games, it seemed like a great time to do it.”

There are four players per side in team curling, with one alternate standing by in case of injury or other need for a sub. In 2010, Shuster benched himself for poor play, but four years ago U.S. alternate Joe Polo never got into a match.

(There used to be a rule that a curler needed to throw at least one end in order to earn a medal; that has changed. “Joe never got on the ice during the last Olympics and he still has that same gold medal I got,” Shuster said.)

Substitutes are sometime brought in to give a teammate a rest — especially the players who furiously sweep the ice ahead of the stones for as many as two sessions per day, for 10 days in a row.

But at the pandemic Olympics, they are also standing by in case someone tests positive for COVID-19.

“Hopefully not,” Kennedy said. “Hopefully everyone stays healthy and is good to go. But if I have to get back in there again, I’ll be even more ready this time.”

The Americans’ day went bad early on, when three straight misses in the second end left Canada with a steal of four. The U.S. was down six at the mid-match break — too early to concede, but not exactly poised for a comeback, either.

Out went Landsteiner and Gallant; in came Hufman and Kennedy, who also made his Beijing debut. It wasn’t such a milestone for him: He is at his third Olympics, winning the gold medal in Vancouver in 2010.

“It’s good to get him in a game because if someone were to get sick or hurt, then he’s got some reps,” Canadian vice skip Mark Nichols said. “You hate coming in cold.”

With his first throw, Hufman put up a defensive guard to protect the scoring area, but with his second he failed to clear the hog line — an embarrassing fail akin to an air-balled free throw in basketball.

“You come out and that’s one of the tougher shots to throw, especially cold off the bench," Hufman said. “That was a bit of a bummer."

But he also helped sweep the final stone in the sixth end into position for three points that made it 7-4. “That’s a fun moment," he said.

The Americans couldn’t cut any further into the deficit and conceded after falling behind 10-5 in the ninth end. They are 2-3 in the round robin, tied for sixth in the race for four playoff spots.

“We were getting our guys a chance to play and get into the game. And, you know, if we ever needed him later to come in, he’s already kind of got his feet wet,” Matt Hamilton said. “Maybe those first couple of stone jitters out of the way.”

And now Hufman can call himself an Olympian.

“I found out that if you don’t actually get on the field of competition, in the IOC’s eyes you’re not actually an Olympian,” Hufman said. “I can’t deny it, I’m happy that’s done now.”

In other men's results from Sunday's first session, Sweden beat Norway 6-4 to improve to 5-0. Britain beat China 7-6 and is tied for second with Switzerland. Russia is tied with Canada for fourth after beating Italy 10-7.

In the afternoon's women's session, Switzerland beat Canada 8-4 to remain undefeated, Sweden beat the Americans 10-4 to tie them for third place with a 3-2 record and Britain is also 3-2 after beating Denmark 7-2.

And in a matchup of this year's Olympic hosts with the 2018 home country, China beat defending silver medalist South Korea 6-5 in extra ends.