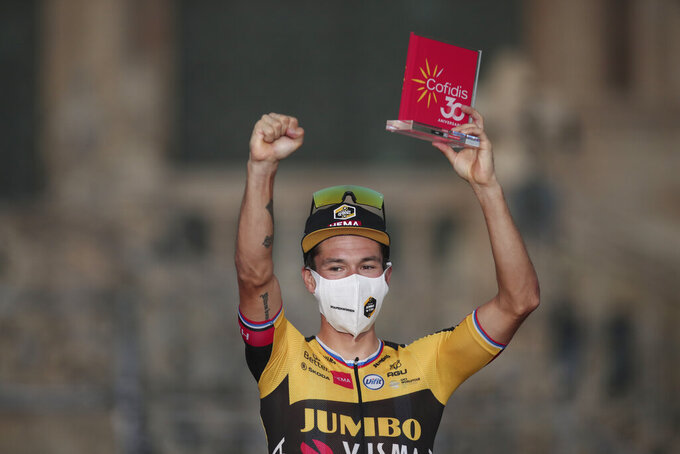 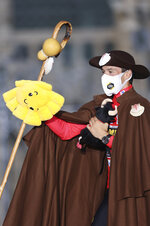 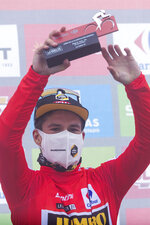 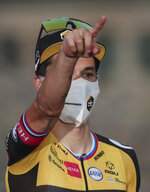 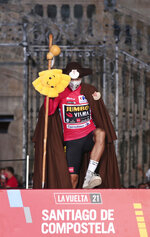 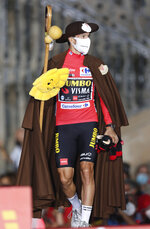 SANTIAGO DE COMPOSTELA, Spain (AP) — Primoz Roglic was barely off his bike before someone shoved a beer in his hand, a welcome way to savor his third consecutive Spanish Vuelta title.

The Slovenian and his Jumbo-Visma teammates then donned shirts to mark the moment.

“Trilogic,” it read, for the trilogy of titles Roglic now has at Spain’s Grand Tour.

Roglic dominated this year’s race as few have. He won four stages, proved unbeatable both in time trialing and the mountains, and built a final gap over runner-up Enric Mas that hadn’t been seen this century.

His winning margin of 4 minutes, 42 seconds over Mas was the largest at the three-week race since 1997.

"It’s unbelievable, it’s crazy," Roglic said. “Sometimes, you win by a lot, sometimes it’s very little. But as long as you can win, it’s good.”

Roglic entered Sunday’s final stage, a time trial of 34 kilometers (21 miles) from Padrón to Santiago de Compostela, with an already comfortable advantage of 2:38 over Mas. But instead of just riding to avoid a title-threatening crash, Roglic did what he had done all race: he went for the win as if each stage was a race in itself.

Roglic powered through the course that finished in the huge square outside Santiago’s medieval cathedral, the destination of thousands of pilgrims who walk the St. James' Way each year.

And despite almost taking a wrong turn midway through, he capped his victory in the final meters by catching and overtaking Mas, who had started two minutes before him on their solo runs.

Magnus Cort Nielsen was chasing his own fourth stage win at the race when he set the time to beat over the decisive time trial. But Roglic finished the stage in 44:02, some 14 seconds ahead of the Dane.

“It was a super nice day, and nice three weeks, so I’m happy for myself and my guys around," Roglic said. “It was hard, the last one after all these weeks. Still I enjoyed support on the road. I tried to focus on the stage win.”

The 31-year-old Roglic completed a fantastic rebound from his disappointing Tour de France, where he was supposed to be Tadej Pogacar’s biggest rival but ended up withdrawing from the race after suffering two crashes in the early stages.

Less than three weeks later, Roglic proved that his Tour performance was not a sign of decline when he won gold for Slovenia in the time trial at the Tokyo Olympics.

Then the former ski jumper returned to his favorite race.

Roglic set the tone by winning the opening time trial in Burgos. Confident in his prowess on the hardest climbs, he kept his cool when he lost the red jersey twice to riders who were not considered title rivals.

Roglic’s only slip was his fall on Stage 10 that cost him time and allowed Norwegian Odd Christian Eiking to become the surprising race leader.

But Roglic bided his time, leaving Eiking to stay in the red jersey for a week until he took it back in style atop the iconic Lagos de Covadonga summit on Stage 17.

Mas may have finished the race runner-up, but the biggest threat to Roglic’s title defense was launched by Egan Bernal on that climb in the northern Picos de Europa mountains.

Bernal, a Tour and Giro d’Italia winner, attacked from distance, with 61 kilometers (40 miles) and two huge climbs to go. Roglic, instead of sitting back and trusting his team to lead him back, jumped on Bernal’s wheel. The pair rode alone on the rainy mountain roads until Roglic shook Bernal free to claim his third stage win.

After the stage, Bernal praised Roglic’s “bravery” for risking it all to match his attack.

Roglic’s shout as he crossed the finish line that day celebrated a double victory: he had claimed one of the Vuelta’s most venerable stages in majestic fashion and dealt a blow that would end up ensuring him another title.