Russia beats Sweden to set up final vs. Finland at Olympics 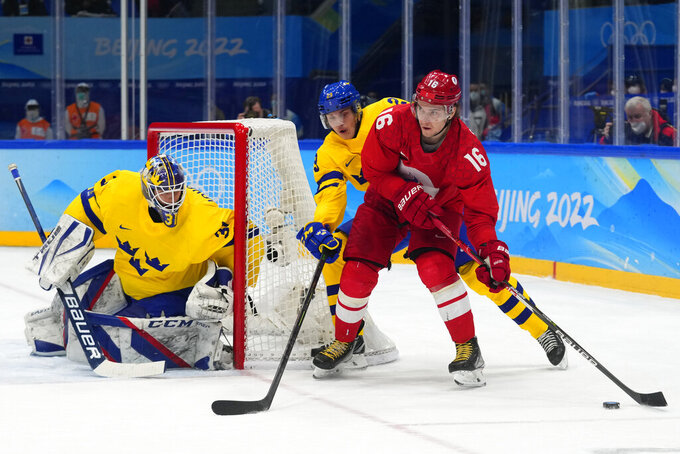 BEIJING (AP) — Anxious feelings overwhelmed the Russians' bench as they fell behind in the shootout against Sweden and needed each goal and save to stay alive.

"Some of the shootouts I didn’t even look," forward Damir Sharipzyanov said. “I was too nervous.”

The Russians got six stops from Ivan Fedotov and goals from Nikita Gusev, Yegor Yakolev and Arseni Gritsyuk to win an eight-round shootout and beat Sweden 2-1 Friday, advancing to a second consecutive Olympic final. The team known as Russian Olympic Committee will face Finland on Sunday looking for back-to-back gold.

“We believed in each other, and we believed in the guys who were going in the shootout,” captain Vadim Shipachyov said.

The pre-tournament favorites are in the gold medal game as expected, even if it hasn't exactly been a dominant run to this point. The semifinal against Sweden was another methodical performance by a team that's built to outscore opponents but has shown it can grind out victories, as well.

“We play our game,” defenseman Nikita Nesterov said. “We are not expected to be a defensive team. We play aggressive, so we need to score more.”

The Russians don't need to score much when Fedotov is on his game. The 25-year-old Philadelphia Flyers prospect who could be in the NHL as soon as next season made 34 saves in regulation and overtime before the shootout.

In the shootout, Yakovlev scored in the fifth round when he needed to convert to keep it going. Fedotov was perfect from the time it became sudden death, and Gritsyuk beat Sweden goaltender Lars Johansson to set off a Russian celebration.

Gritsyuk blamed himself for Anton Lander's tying goal in the third period, so it was a bit of redemption that he scored the winner.

“It was weighing on my soul that my mistake could hurt my team and I wanted to go out and fix that,” he said. “I’m really happy that Vanya Fedotov played great. He gave us a chance.”

Anton Slepyshev scored the Russians' only goal in regulation, 15 seconds into the second period. Johansson made 39 saves through the 3-on-3 overtime.

After beating underdog Germany in overtime in the final in Pyeongchang, the Russians will face a more formidable opponent this time in Finland, which defeated Slovakia 2-0 in the other semifinal.

Finland got a goal from tournament MVP candidate Sakari Manninen and 28 saves from Harri Sateri to move within one victory of the nation’s first Olympic hockey gold medal. The closest Finland has gotten were silver medals in 2006 and 1988.

“It’s huge for everybody individually, as a team and as a hockey country,” Sateri said. “It is a big thing.”

Slovakia will play Sweden for bronze, going for its first hockey medal of any kind since the breakup of Czechoslovakia.

“It would be a huge achievement, but it will be a tough game,” said 17-year-old forward Juraj Slafkovsky, who’s tied for the tournament lead with five goals. “If we do our best, then I’m not worried that we can’t win the game.”