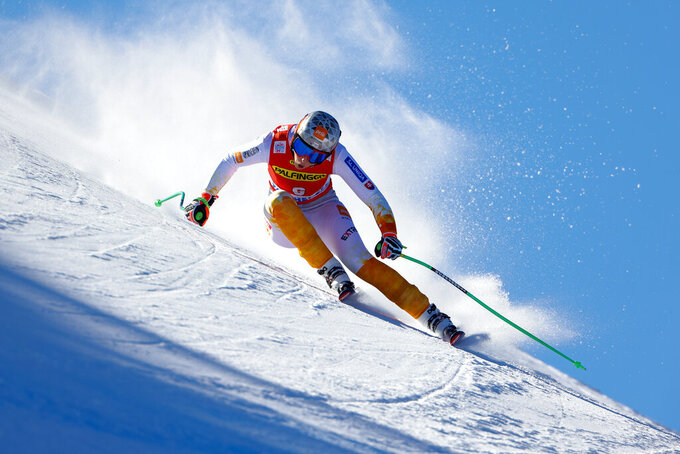 BEIJING (AP) — Whether it's a figure skating melodrama starring Tonya Harding and Nancy Kerrigan, or years of cross-country skiing showdowns between Norway and Italy, rivalries have a way of spicing up the Winter Olympics.

On Tuesday, the United States and Canada resume their feud in women's hockey when they meet in the preliminary round. That might be the most spirited rivalry going at the Beijing Games. It combines all the key elements — high stakes, consistent excellence and plenty of bad blood through the years.

Not every rivalry is necessarily that contentious. When athletes face each other enough times — especially when they're at the pinnacle of their sport — they often develop a healthy respect. And if they bring the best out of each other, it can make for incredible theatre.

Here are a few other marquee matchups to watch at the 2022 Games:

American skiing star Mikaela Shiffrin and Slovakian rival Petra Vlhova figure to clash throughout the Olympics. They're 1-2 in the overall World Cup standings. Vlhova won that title last season. Shiffrin did it three straight times from 2017-19.

Vlhova has never won an Olympic medal. She's the same age (26) as Shiffrin, who has two golds and a silver. Vlhova did win the 2019 world championship title in giant slalom, and she raced in all six Alpine events at the 2018 Pyeongchang Olympics.

“For a long time Mikaela was better than me," Vlhova said. “However, in the last seasons I showed clearly I am able to beat her often. We respect each other because we both know very well how difficult it is to become the best in the world.”

Figure skating has had plenty of dramatic showdowns over the years. One of the most famous on the men's side came in 1988's "Battle of the Brians" — when Boitano of the United States defeated Orser of Canada in Orser’s home country.

This year, the anticipated matchup is between Nathan Chen of the United States and Yuzuru Hanyu of Japan. Hanyu won the last two Olympic titles. Chen has three world titles since 2018.

Chen objected to the term rivalry when talking about Hanyu. There's clearly plenty of respect.

“I wouldn’t say we have a rivalry,” Chen said. “He has always been the icon of figure skating. It’s great to have the opportunities to skate against him. He always pushes the sport forward.”

Chen already won the short program in the team competition in Beijing. Hanyu wasn't competing in that.

The NHL's withdrawal took some of the luster out of the men's hockey competition this year, but if the Canadians and Russians face each other, it'll be important — even if the players aren't household names. There's just too much history between these two hockey superpowers.

What's interesting is that much of that history has taken place outside the Olympics. Canada and the Soviet Union had some memorable battles in the Summit Series and various Canada Cups, but it's been a while since Canada faced Russia with everything on the line at the Olympics. Canada beat out the United States for the gold in 2002 and 2010, and Sweden in 2014. The Russians beat Germany in 2018 — after the Germans eliminated Canada in the semifinals.

In 1992, the Unified Team of Soviet republics beat Canada for the gold, but it's been rare for that dream matchup to occur in a winner-take-all matchup for the gold.

Bolshunov is already off to a good start this time. He won the skiathlon on Sunday, with Klaebo finishing 40th. But that wasn't Klaebo's best event four years ago.