Tokyo Olympics to pick Mori replacement; is a woman likely? 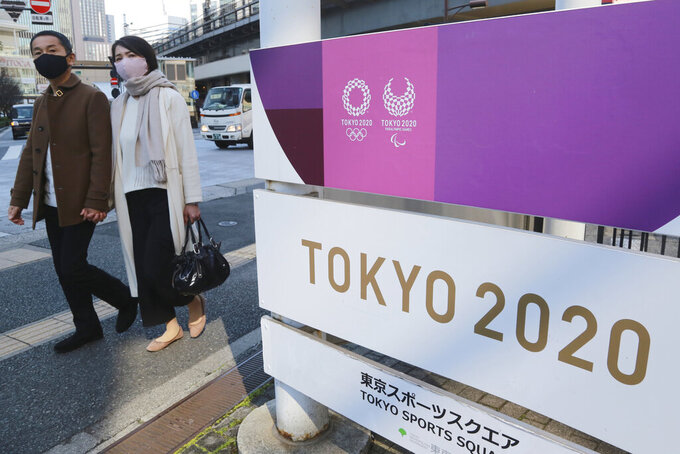 People walk by signage to promote the Olympic Games, in Tokyo, Tuesday, Feb. 16, 2021. The Olympics are scheduled to open on July 23 but recent polls show about 80% of the Japanese public want the Olympics canceled or postponed. (AP Photo/Koji Sasahara)

TOKYO (AP) — Yoshiro Mori's replacement as president of the Tokyo Olympic organizing committee is expected to be named very quickly. The 83-year-old former prime minister was forced to step down last week after making demeaning remarks about women.

Basically, he said they talk too much.

There is pressure to name a woman to replace Mori. But don't bet on it happening with the Olympics opening in just over five months. Mori tried last week to work behind the scenes to appoint 84-year-old Saburo Kawabuchi, the former head of the governing body of Japanese soccer. Public opinion and social media quickly pushed back against the move and Kawabuchi withdrew from consideration.

Some news reports in Japan say the front runner might be 63-year-old Yasuhiro Yamashita, the head of the Japanese Olympic Committee and a judo gold medalist from the 1984 Olympics.

Yamashita took over the Japanese Olympic body after his predecessor, Tsunekazu Takeda, was forced to step down in 2019 in a bribery scandal. Yamashita is also a member of the International Olympic Committee by virtue of his position in Japan.

A panel to pick Mori's replacement, set up by the organizing committee, met on Tuesday. It was expected to meet again Wednesday and come up with a list of candidates. It's unclear when the choice will be announced. The panel is headed by 85-year-old Fujio Mitarai, the chairman of the camera company Canon. Organizers have promised transparency. However, except for Mitarai, the other members have not been announced. It is to be a 50-50 split of men and women with fewer than 10 members.

Q: Have qualified women been mentioned for the job?

A: Media in Japan have listed almost a dozen women — most in their 50s — that seem to fit the bill. Many are former Olympians and medal winners. Japan ranks 121st out of 153 in terms of gender equality in a report done by the World Economic Forum, and the “old boy network” remains stronger in Japan than in most developed countries.

Q: Who are the female possibilities?

A: Seiko Hashimoto, the current Olympic minister in the government of Prime Minister Yoshihide Suga, has been mentioned frequently. She won a bronze medal in speedskating in 1992. Reports Tuesday said she was reluctant to take the job. There are many other Olympic medal winners, but it's not clear any will be interested: Yuko Arimori (silver 1992, bronze 1996, marathon); Mikako Kotani (2 bronze 1988, synchronized swimming); Naoko Takahashi (gold 2000, marathon); Yuko Mitsuya (bronze 1984, volleyball); Kaori Yamaguchi (bronze 1988, judo). Also mentioned has been former Olympic minister Tamayo Marukawa and businesswoman Tomoko Namba.

In addition to Yamashita, some men have also been mentioned. They include former Prime Minister Shinzo Abe, Olympic gold-medal swimmer Daichi Suzuki, and Koji Murofushi, who won gold and bronze in the hammer throw.

Q: Did Mori's comments do any real damage to the Olympics?

A: In terms of operation, probably not. Mori surely helped work out many of the political deals to push through funding. Official costs are now $15.4 billion, though government audit suggests it might be twice that much. But now the postponed Olympics are in the hands of the pandemic.

But the reputation of Japan and the Olympics took a hit. The International Olympic Committee has bragged about the strides in has made in gender equality over the last two decades — on the field and on its boards. Japan, not so much. This has not helped public opinion. Just over 80% in polls in Japan say the Olympics should be canceled or postponed again.

“Japan is still governed by a club of old men.” Koichi Nakano, a politicial scientist at Sophia University, wrote in an email. “They continue to pick these old men in order to silence possible dissent and to continue to put women ‘in their place.’ Social norms are changing, though, and a clear majority of the Japanese found Mori’s comments unacceptable."

Q: How is the gender balance in the Tokyo organizing committee?

A: Not good. The executive board and council met on Friday to accept Mori's resignation. Of the 38 members of the executive board, eight are women (21%). None of the vice presidents is a woman. Of the six council members, one is a woman (16.7%). The day-to-day leadership is also almost all male, led by 77-year-old Toshiro Muto, the CEO and former deputy governor of the Bank of Japan.