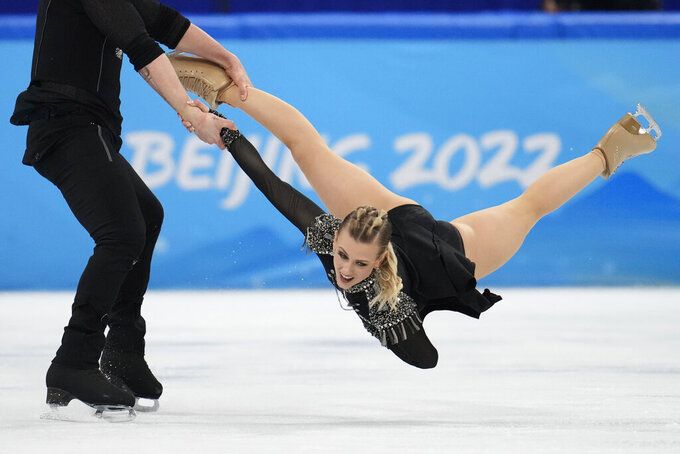 Madison Hubbell and Zachary Donohue, of the United States, perform their routine in the ice dance competition during figure skating at the 2022 Winter Olympics, Saturday, Feb. 12, 2022, in Beijing. (AP Photo/Natacha Pisarenko)

First, though, they'll have to spend Valentine's Day in the most awkward way imaginable: competing against each other.

Hubbell and her longtime partner, Zachary Donohue, are in third place and aiming for a medal when the American duo concludes competition Monday with the free dance. Diaz and his partner, Olivia Smart, are farther down the standings as they try to improve on their rhythm dance with a memorable final performance for Spain.

“It has never been a very close fight,” Diaz said almost sheepishly.

Indeed, Hubbell and Donohue are among the elites of the ice dance world, a pair that was once an off-ice couple but was so good on it that they stayed partners — and best friends — even when the relationship ended. Along the way, they've captured a pair of silver medals at the world championships and were fourth at the Pyeongchang Games.

Diaz and Smart have never finished in the top 10 at the world championships.

So yes, the two pairs are competing against each other in the literal sense. But in the practical sense, there isn't much competition at all. And that takes all of the stress out of what could be a tricky, delicate situation, allowing Hubbell and Diaz to be each other's biggest fan on the rare occasions that they actually get a chance to sit in the stands.

Like during the team event last week, when Hubbell helped the U.S. win the silver medal — which could be elevated to gold once the Russian doping scandal reaches its conclusion. Spain did not have a team competing in the event.

“It was especially special for me to have my fiance in the stands,” Hubbell said, “because usually we're focused on our event so much that we don't get to see each other in person. So I'm really happy to have him able to be there.”

There are quite a few real-life couples at the Winter Olympics, and they count themselves fortunate: The closed-loop system put in place to prevent COVID-19 outbreaks included a ban on foreign visitors, so those who arrived in Beijing with their significant other as a coach, teammate or, yes, even a rival, will get to spend Valentine's Day together.

Diaz even said he had a gift for Hubbell, though he wouldn't spoil the surprise Saturday night.

Montana-born ice dancer Tim Koleto also planned ahead, bringing a gift for his wife, Misato Komatsubara. After all, boxes of chocolates are hard to come by in the Olympic bubble and a candlelight dinner pretty much impossible.

There happens to be a florist in the Olympic Village, though. Saving grace for those without the same forethought.

“We're very lucky to be able to spend our time here together,” said Kotelo, who along with Komatsubara helped Japan win a team bronze medal, and whose love story belongs on the desk of someone from the Hallmark Channel.

Koleto began his career as a singles skater before switching to dance in 2013 and teaming with Yura Kim to represent South Korea. When that partnership ended the following year, he began skating with Thea Rabe and represented Norway for a while. And when that pairing ended in 2016, Koleto seriously thought about walking away from the sport.

Around the same time, Komatsubara's partnership with Andrea Fabbri representing Italy was coming to an end. So on a lark, Koleto flew to Milan — the site of the next Winter Olympics — and met Komatsubara for a tryout. The connection was instantaneous, and they not only became ice dance partners but within a year were getting married.

He became a Japanese citizen in 2020, legally adopting the Komatsubara surname out of respect for his wife.

“We talk about it often that it was fate that we found each other the way we did,” Koleto said. “Both of us were a little bit disillusioned with this sport and maybe ready to walk away before we found each other, because starting again with a new partner is a long and difficult process. And you get to know each other so deeply and so intimately, even when you’re not together for three hours. So it’s a long process to start that again. So I’m so happy that we found each other.”

Most ice dance partnerships are not real-life couples, even though a necessary part of a winning program is showing off precisely that kind of chemistry. For them it's an act, just like a dramatic performance on stage or screen.

Yet sometimes those partnerships turn into more. That was the case for American ice dancers Madison Chock and Evan Bates. The reigning national champs have been dancing together for more than a decade, and are at their third Olympics together, but they didn't begin seriously dating until several years after beginning the partnership.

They were fourth after the rhythm dance Saturday night and now will celebrate Valentine's Day together Monday, trying to move onto the podium and earn another medal at the Beijing Games.