US to face Slovakia in Olympic men's hockey quarterfinals 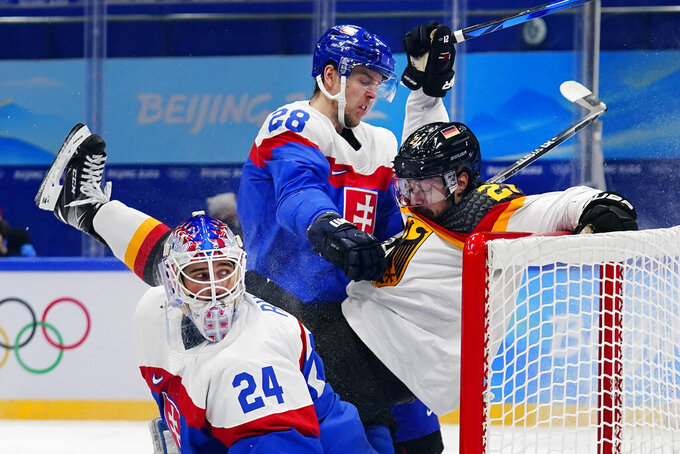 BEIJING (AP) — Miroslav and Michaela Knies will have big smiles on their faces when their son Matt plays for the United States against Slovakia at the Olympics.

The quarterfinal matchup Wednesday is also special for Matt Knies, a University of Minnesota forward who has strong ties to his parents’ birth country, including playing for Slovakia in a youth tournament.

“It’ll be a moment I won’t forget for a long time,” said Knies, who also played for the U.S. against Slovakia in the world junior championship in December. “I love my roots. Obviously both my parents were both there and same with my older brother. All my relatives live there and I always go back when I can in the summer. I love Slovakia. Whenever I get to go visit there, it’s definitely a great time. But I’m born in the U.S., so I love representing my country. It’s going to be an exciting game.”

Slovakia earned a spot in the quarterfinals by beating Germany 4-0, knocking the reigning silver medalists out of the men's hockey tournament in the qualification round. Denmark moved on to face the third-seeded Russians by coming back to beat Latvia 3-2.

The U.S. practiced while Slovakia was playing Germany, and that's just as well because coach David Quinn would rather his players worry about themselves than their opponent.

“It’s way more about us, our team and our progress and continuing to get better,” Quinn said. “We certainly (have been) taking a look at what Slovakia does and if there’s anything we haven’t seen before, certainly we’ll talk about it, make the adjustments, but at the end of the day, we want to keep rolling through and improving and tightening up the areas we need to tighten up on and keep doing the things we’re doing well more consistently.”

U.S. forward Brendan Brisson said he and his teammates haven't felt better since getting to Beijing, thanks to a day off Monday and the confidence that's going strong for the youngest team in the tournament. The U.S. goes into the knockout round as the only team to win all of its group games in regulation.

Slovakia has won two in a row and is starting to find its game just in time for the difficulty level to get ratcheted up.

"We build with every game," former NHL forward Marko Dano said. “(We are) just believing in ourselves and sticking up for each other and being there for each other. That worked. I feel like with every game we play better, and hopefully (against the U.S.) we can play as a team again.”

Slovakia coach Craig Ramsay, who played 14 NHL seasons and spent more than two decades in the league as an assistant, does not want his team to get into a track meet up and down the ice against the young Americans.

“It’s going to be important for us to have good sticks, stick on puck, win the battles when we have to,” Ramsay said. “If we can continue to play with that kind of speed and aggressiveness, then teams have to chase us. You certainly don’t want to get in a battle with that U.S. team where you’re chasing them around the ice because they’re just too quick.”

Young Slovakia players Juraj Slafkovsky and Simon Nemec were also part of the world juniors game against the Americans before that tournament was abruptly canceled out of COVID-19 fears. Knies, fellow skaters Matty Beniers, Jake Sanderson and Brock Faber and goaltender Drew Commesso all played in that game.

“It’s good to face them again," Slafkovsky said. ”I just want to win."

Sanderson is questionable with an undisclosed injury. He practiced Tuesday after missing the final U.S. preliminary round game Sunday against Germany. Even though Sanderson did not take part in team drills, Quinn said it was an encouraging sign that the University of North Dakota defenseman was on the ice.

“He really is day to day," Quinn said.

Slovakia goes in as the underdog, but it's still in the tournament thanks in large part to defenseman Mislav Rosandic, who was one of the best players on the ice against Germany. It's a major accomplishment for him to be at the Olympics after being born in Zagreb in 1995 and growing up in postwar Croatia before emigrating to Slovakia.

“It means a lot to me,” Rosandic said. “My journey is not usually one for some young boy from a hockey country because in my country there is not much hockey. Maybe I will write a book about it after my career.”