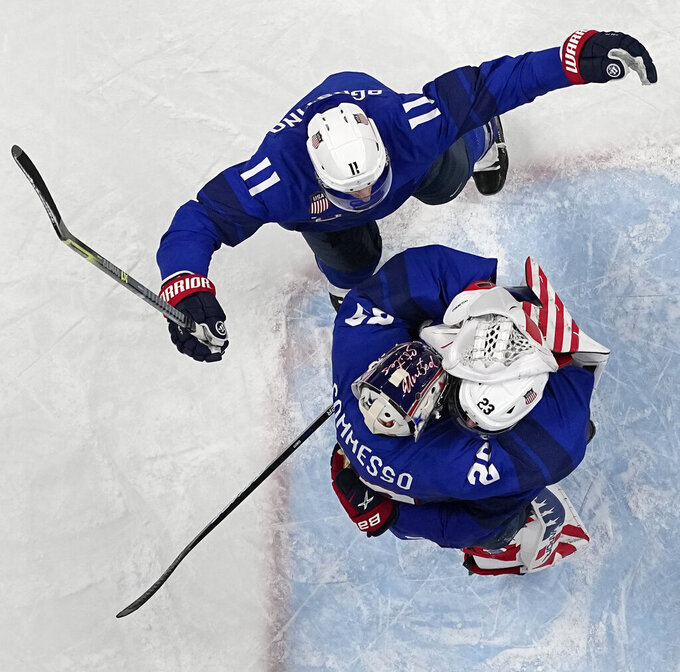 BEIJING (AP) — David Quinn hears the music coming from the locker room and stops in his tracks. He needs to walk in to talk to his players but doesn't want to interrupt.

“I’ve got to let this song finish,” Quinn thinks to himself.

Often, it's Maxine Nightingale's “Right Back Where We Started From" — the song from the bar scene in the iconic hockey movie “Slap Shot.” Other times it's Bryan Adams' “Summer of ’69” or Paul Simon's “Me and Julio Down by the Schoolyard.”

The old-school music has helped the United States, with players ranging in age from 19 to 35, bond quickly off the ice. The camaraderie is showing through on the ice for the only team in the Olympic men's hockey tournament to win all its preliminary round games in regulation, earning the top seed.

“I think everyone kind of likes the old tunes,” said 19-year-old Matty Beniers, who made the playlist well before the Olympics. “It’s a good common ground because a lot of the older guys don’t like the hard rap and the younger guys usually like the older music, so it’s good.”

There's "Build Me Up Buttercup" by the Foundations, “Rich Girl" by Hall and Oates, “Carry on Wayward Son” by Kansas and “Three Little Birds” by Bob Marley and the Wailers. Beniers' favorite is Marvin Gaye and Tammi Terrell's “Ain’t No Mountain High Enough."

“It’s the best playlist I’ve heard in hockey,” said Quinn, who is 55 and enjoying the age-appropriate tunes. “I told Matty Beniers, ‘You’re a hell of a player, but you’re a better DJ.’"

That's not a coincidence. Beniers was raised to appreciate music by his mother, Christine, an actress who performed on tour in “A Chorus Line” and on Broadway before becoming an attorney. Christine was addicted to show tunes growing up and got her first paying gig at age 12 in a dinner theatre production of “The King and I.”

While Christine's fire chief father and office administrator mother were supportive of her interests, she made sure sons Matty and Bobby and daughter Gianna were immersed in music and entertainment growing up.

“My dad was kind of the sports guy and my mom was the music," Matty Beniers said. "My mom said if we can play all these sports, we’ve got to do all these instruments.”

Beniers and his siblings played the piano, attended camps and watched their mother direct school musicals. He has since given up piano and focused on hockey, but he hasn't lost connection to his musical side.

“It was just a part of my life growing up," Beniers said. “It was pretty cool to have that kind of side, go to plays, see those things.”

Quinn said the Americans have “really become a team in a short period of time.” Winning their first three games certainly helped, but it's also a mix of personalities USA Hockey figured would mesh well together.

“We were very conscious of the type of the people we were choosing,” Quinn said. “We’re very fortunate that the players we wanted from a talent standpoint certainly checked the boxes from the people standpoint. When you’ve got all that, you’ve got a much better chance to have success.”

The U.S. success has made the music sound better before and after practices and games. Three more victories, starting with the quarterfinals Wednesday against Slovakia, would give the U.S. its first Olympic gold medal in men's hockey since the “Miracle on Ice” team in 1980.

None of the players on the youngest roster in the tournament were born then, but they also weren't around when most of the songs on the playlist came out. That doesn't seem to matter.

“It’s funny to play different songs in the locker room and see what the older guys remember and hear about what they think about the new music,” Beniers said. “It affects everyone in different ways. It dials guys in. It keeps some guys loose.”

As long as the U.S. keeps winning, the music will keep playing.