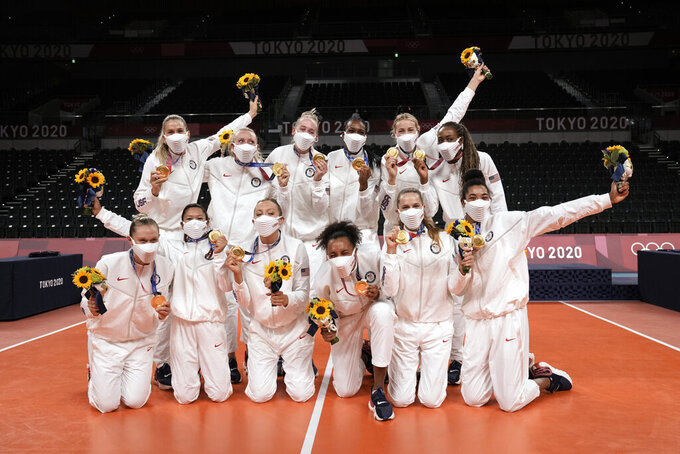 Players from the United States pose after winning the gold medal in women's volleyball at the 2020 Summer Olympics, Sunday, Aug. 8, 2021, in Tokyo, Japan. (AP Photo/Manu Fernandez)

TOKYO (AP) — Jordan Larson fell to the floor, put her head in her hands and cried after Brazil couldn’t return her spike on match point.

The frustration of being so close but not quite good enough was replaced by a feeling of relief after the U.S. women’s volleyball team finally claimed Olympic gold with a 25-21, 25-20, 25-14 victory over Brazil on Sunday.

The United States, which had won three silver medals and two bronze since first getting on the medal stand in 1984, got to the top step by beating the team that denied it a chance at gold in the final match of the 2008 and 2012 Olympics.

Larson, who was part of that silver-winning team in 2012 and the bronze medal team five years ago, paved the way with her leadership on the court and her strong play on the attack and on defense.

Larson and middle blocker Foluke Akinradewo Gunderson, who both came back for a third Olympics after falling short in Rio de Janeiro, now have a complete medal collection following what is expected to be the final Olympic match of their careers.

“I couldn’t write a better story for her,” setter Jordyn Poulter said about Larson delivering the winning point. “Her and Foluke have put so much time into this program and been through thick and thin. To be on this journey with them has been incredible.”

The victory also allowed U.S. coach Karch Kiraly to join Lang Ping of China as the second person to win gold as a volleyball player and then lead a country to gold as coach. Kiraly won gold indoor as a player in 1984 and 1988. He also won gold in beach volleyball in 1996.

But he said this was more gratifying because of how tough a process it has been since he joined the staff as an assistant before the 2012 Olympics and took over as head coach before 2016.

The U.S. got off to a fast start by scoring the first four points behind strong attacking by Michelle Bartsch-Hackley. It never trailed in the opener, winning it 25-21 on a soft shot by Bartsch-Hackley that gave her eight points in the set.

That pattern continued the next two sets as the U.S. ended up winning all nine sets in the knockout round.

The match then ended in fitting style with a kill by Larson, leading to the tearful hug among the players on the court.

“A lot of people had to sacrifice a lot for us to be here and had to learn along the way,” Larson said. “We had to learn that in London and in Rio that we just weren’t enough at that point. Did we believe it in that moment? Absolutely. We had to go one extra step to figure it out.”

The journey to this stage has been a long one for a U.S. women’s team that started more than 40 years ago when the 1980 Olympic squad made the decision to begin year-round training, only to get denied the opportunity to compete because of a U.S.-led boycott of the Moscow Games.

But the foundation had been put in place, and the Americans have won six medals in the past 10 Olympics and now finally have their gold.

Brazil had won gold in either men’s or women’s indoor volleyball in four straight Olympics, with the men claiming the title in 2004 and 2016 and the women in 2008 and 2012. But it will leave only with a silver this year, after the women lost for the first time in Tokyo following seven straight wins. The men lost a semifinal match to the Russians and then the bronze medal game against Argentina.

“The first feeling that comes to mind is a feeling of sadness,” Brazilian outside hitter Gabi Guimarães said. “We could not implement the tactics that we had been implementing in previous games.”

Brazil played the match short-handed after outside hitter Tandara Caixeta was sent home before the semifinals following her suspension for a potential violation of anti-doping rules. Tandara's lawyer said a banned substance found in a July test was introduced accidentally into her system.

In the bronze medal game, Serbia beat South Korea 25-18, 25-15, 25-15 to go home with a women's volleyball medal for the second straight Olympics. The Serbians won silver in 2016 for their first medal in the sport.