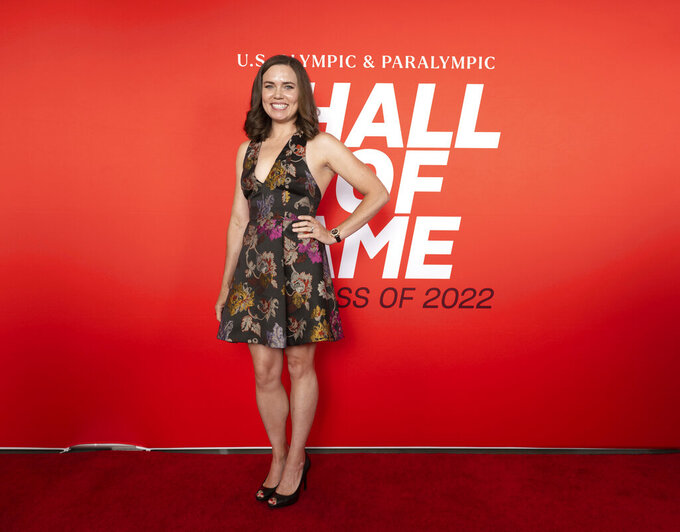 Lindsey Vonn used her induction speech into the U.S. Olympic and Paralympic Hall of Fame on Friday to urge athletes to put their platform to good use, “especially today,” the day the Supreme Court overturned the landmark ruling that guaranteed a women's constitutional right to abortion.

Vonn joined Michael Phelps, Billie Jean King, Michelle Kwan, Mia Hamm and the late Pat Summitt among the inductees into the Class of 2022.

Vonn gave a special nod to her mother, Linda Krohn, who is battling ALS.

She closed with a message to fellow athletes, urging them to keep the Olympic spirit alive by “using your world, your platform, for good.”

“These amazing people before me and many others have proven that great things can be achieved in ways that reach far beyond medals,” Vonn said. “And in the world we live in now, especially today, it’s so incredibly important.”

King, at the forefront in the fight for women's advances in sports, was the first woman inducted in the “special contributor” category. She said it felt only appropriate that her honor came during the same week as the 50th anniversary of Title IX.

“To be the first woman to be inducted in a special contributor category is a true honor and reflective of my lifelong goals: To make sure what I did off the court had more impact than what I did on it," she said.

Inductee Natalie Coughlin said that had it not been for the landmark bill, her swimming career would've ended in 2000, before she became a multi-time NCAA champion and four years before she won the first of her 12 Olympic medals.

The 1976 women’s 4x100 freestyle relay swimming team, anchored by Shirley Babashoff in its stunning upset over the East Germans, and the 2002 men’s Paralympic sled hockey team also were inducted after being voted into the hall by a mix of Olympic and Paralympic athletes, media and administrators and fans.

Led by a record-setting 28 medals and 23 golds won by Phelps, this year’s class has captured a total of 129 medals, including 86 gold.