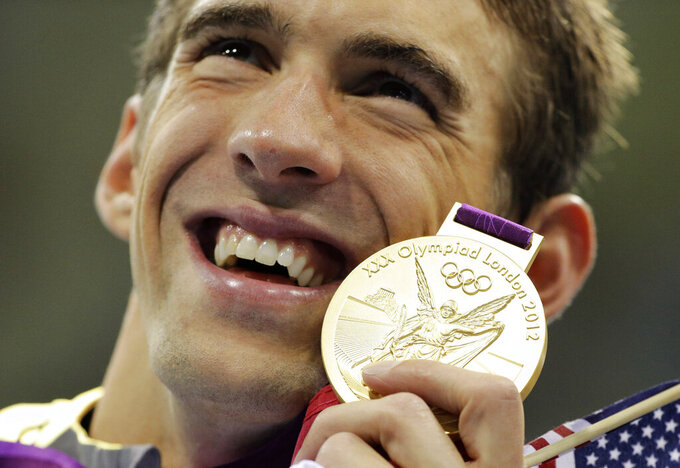 FILE - In this July 31, 2012 file photo, United States' Michael Phelps poses with his gold medal for the men's 4x200-meter freestyle relay swimming final at the Aquatics Centre in the Olympic Park during the 2012 Summer Olympics in London. (AP Photo/Matt Slocum, File) 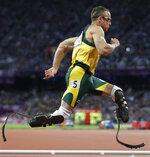 LONDON (AP) — In the end, 2012 wasn’t the last Olympics to see Usain Bolt and Michael Phelps. It was the Summer Games where their legendary status was cemented.

Bolt became the first athlete to win both sprints at consecutive Olympics.

The Jamaican track sensation electrified the Olympic Stadium in London by winning the 100 meters in 9.63 seconds and the 200 in 19.32. It was so effortless that he could afford to ease up over the last few strides of the 200 and raise his left index finger to his lips. It was telling everyone to shush.

“That was for all that people that doubted me, all the people that was talking all kinds of stuff that I wasn’t going to do it, I was going to be beaten,” Bolt said. “I was just telling them: 'You can stop talking now, because I am a legend.'”

Bolt’s last spectacle for the London crowd was sealing a third gold by running a blistering anchor leg to set a world record in the 4x100 relay.

It was only a short dash from the track to the pool on the Olympic Park.

The aquatics center is where Phelps became the most decorated athlete in Olympic history. With four golds and two silvers, the then-27-year-old American’s medal haul rose to 18 golds and 22 medals overall.

And with that he hung up his suit, cap and goggles.

“I have not officially retired yet,” Phelps said “but very soon I will be signing those papers and it will be official.”

Of course, he couldn’t resist coming back for more in Rio de Janeiro four years later. Neither could Bolt.

The highlight of the opening ceremony of the third Olympics to be staged in the British capital was Queen Elizabeth II making her acting debut -- alongside James Bond. “Good evening, Mr. Bond,” the then-86-year-old monarch said after swiveling around in her chair to face the spy inside Buckingham Palace. Trickery was then used to make it seem the queen had flown across London in a helicopter and parachuted into the Olympic Stadium with the tuxedo-wearing actor. At the same moment, real skydivers appeared as the stadium throbbed to the James Bond theme. And moments after that, the monarch appeared in person.

At 17, Missy Franklin won five medals in the pool, four of them gold, to help the U.S. team win 31 medals (16 gold) in swimming -- nearly a third of the total American medal haul in London. American gymnast Gabby Douglas was a year younger than “Missy The Missile” when she won two gold medals in gymnastics.

Judo fighter Wojdan Ali Seraj Abdulrahim Shahrkhani became the first Saudi woman to compete at an Olympics. Wearing a modified hijab, Shahrkhani drew roars from the crowd as she stepped on the mat against Puerto Rico’s Melissa Mojica, who quickly defeated her. Qatar and Brunei also sent female Olympians for the first time.

With 28 gold medals, Britain finished third in the medal standings for its best showing since the 1908 London Games. Three British athletes won gold medals in Olympic Stadium in 44 minutes on what became known in the host nation as “Super Saturday” Jessica Ennis won the heptathlon, Greg Rutherford won the long jump, and Mo Farah won the 10,000 meters. Adding two golds from the rowers and another from women’s track cycling, Britain’s total for the day was six. The Olympics finally saw Andy Murray win a single’s title at Wimbledon. The following year, the Scot became the first British man in 77 years to win the Grand Slam single’s title at the All England Club.

In badminton, two South Korean women’s doubles teams along with a Chinese and an Indonesian team were sent home in disgrace for trying to lose early matches so they could get better draws in the knockout round.

Oscar Pistorius is now serving a jail sentence of 13 years and 5 months for the murder of Reeva Steenkamp, the girlfriend he shot multiple times in his home in 2013. A year earlier, he made history by becoming the first double-amputee to run at an Olympics. He anchored the South African team in the 4x400-meter relay final, running on carbon-fiber blades.