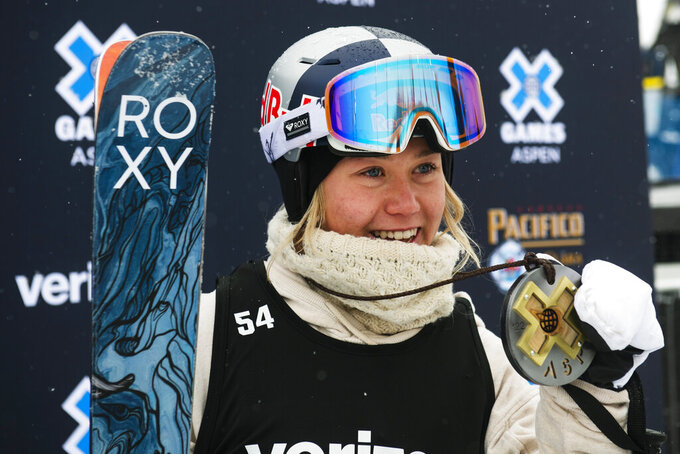 France's Tess Ledeux holds her gold medal after landing a 1620, the first in a women's big air competition, at the Winter X Games on Friday, Jan. 21, 2022, at Buttermilk in Aspen, Colo. (Kelsey Brunner/The Aspen Times via AP)

The calculus on the halfpipe remained hazy as ever Friday night when James notched his fourth career victory at the Winter X Games even though he didn't attempt snowboarding's most-difficult trick.

The question heading into the Olympics is whether it's even worth it.

Less than five weeks after becoming the first to do it in competition, Hirano again landed a triple-flipping jump on his first trick. But, as was the case the first time, Hirano could not land the next jump. Riders usually need to land at least five to complete a run, and nobody has yet made a triple cork part of a full run in competition.

It left Hirano, the two-time Olympic silver medalist, with a silver medal in Aspen, as well. And James, who took bronze in Pyeongchang four years ago, earned another gold.

“The triple is so difficult,” Hirano said through a translator. “And then, it's also tough to link the next trick.”

So far, James' best has featured the switchback double cork 1260 — a daunting, near-blind trick that involves two head-over-heels flips after riding backward up the wall, then spinning toward the top of the pipe.

He executed it on his first three runs, and the judges placed him ahead of Hirano after the second run. (No scores are given at the X Games, and judges simply rank the riders based on the overall impression of their runs.) Hirano's younger brother, Kaishu, finished third.

“Switch backside still has a lot of clout, which you still don't see that much of,” James said. “And I think it played a key part for me tonight against Ayumu.”

After Hirano fell on his final run, James, who was last on the start list, simply went for straight airs on a victory lap. This was James' first contest in America this season, and he has been playing it coy about the triple cork.

The next chance to find out what, exactly, he's been working on in a secret setting in Europe will come Feb. 11 in the halfpipe finals in the mountains outside Beijing.

Also in the mix there, but absent from Aspen, will be three-time Olympic champion Shaun White and last year's Winter X champion, Yuto Totsuka. Totsuka crashed hard at the last Olympics but has been dominating this sport through most of the last 24 months.