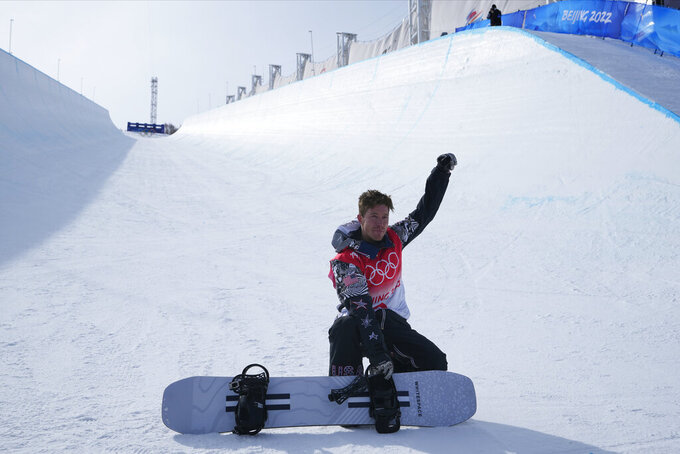 ZHANGJIAKOU, China (AP) — Shaun White bent down to one knee, set his snowboard on its edge and raised his left hand toward the sky.

The crowd, never huge to begin with in this pandemic era, had thinned to four or five dozen — most of them who knew him, or loved him, or had been around over the past 20 years to watch him take snowboarding on a wild ride to the Olympics and beyond.

They all cheered. Moments later, after working his way through a few more people who only wanted to touch him, Friday's fourth-place finisher, his Olympic crown now worn by Ayumu Hirano of Japan, rode away from the halfpipe for the very last time.

“I’m not sad,” he had insisted about 30 minutes earlier, even though the tears, the stifled sobs and the stories he told spoke of the melancholy of knowing this party really is over.

On a bittersweet day of riding that ultimately ended in a fall, White came one spot shy of a medal. It was nothing to be ashamed of considering the massive tricks going down in what surpassed the previous Olympics as the most progressive halfpipe contest ever.

It also was not exactly what he had hoped for. It certainly was not the fourth gold medal that, frankly, had felt like a dream given what he's been through over the past few months.

It would be easy to say that was beside the point. But White was the man who, almost singlehandedly, made it cool to ride for big bucks and big trophies and Olympic medals in a sport that took decades to come to terms with that worldview.

In his final run, he was trying to pull off the same five tricks that won him his third gold medal, four years ago in Pyeongchang.

On his third and final run of the day, the final run of his career, he fell on the second of two straight double-cork, 1440-degree jumps he was trying to execute.

Four years ago in South Korea, he pulled it off for the first time ever and finished first. This fourth-place finish, thanks to an earlier run that was a tad less difficult, matched the other just-off-the-podium result he got during his frenzied trip to the Sochi Games in 2014.

“Three out of five. Not bad,” White said of his Olympic record.

In so many ways, watching what went down on a cold, crisp, practically perfect day for riding — with two-thirds of the halfpipe enveloped in shade and the sun beaming down on the rest — felt more like a victory than a loss for the world's most famous rider, and for snowboarding overall.

“I hoped I could send a message to him by showing my ride to him,” said Hirano, the 23-year-old whose triple-cork jump set the standard and earned the narrow win over Scotty James of Australia.

White didn't have the triple, and without it, even had this winter gone smoothly — which it did not — he knew he'd be fighting uphill if anyone put it down as part of a complete run here.

But this was hardly a day to talk about what White couldn't do.

“The overall riding was incredible," Donna Burton Carpenter, whose late husband, Jake, invented the modern-day snowboard and helped bring the sport to the mountain and into the mainstream, told The Associated Press in a phone interview. “I think, on some level, we were all rooting for Shaun today. He gave it his best shot and went out like a champion.”

“I'm sure every single person who competed today looked up to him for a very long time,” said Jan Scherrer of Switzerland, who finished third. “It's a very cool moment.”

As White reminisced over 90 minutes' worth of post-contest interviews, he spoke of his sheer delight he felt as a kid when his mom busted through the door in his classroom, holding the new snowboard that had finally arrived.

He talked about Jake Burton Carpenter, who met White as a young kid and was one of his most ardent backers. “He'd probably give me a big hug, tell me how proud he was and say, ‘enough’s enough,'" White said.

He spoke about the lead he took in his sport — a lead that not everyone appreciated in real time. Fierce competitors were not thought of as cool when White broke into this game in the early 2000s, a goofy redheaded wunderkind — “The Flying Tomato” — who flew higher than anyone and made himself marketable well beyond the shadow of any halfpipe.

And he spoke about always wanting to prove himself. So many people thought he was throwing his life away by focusing on a sport that, when he started, wasn't even accepted on every mountain in America.

“I had something to prove, and my sport was pretty misunderstood,” White said as he choked back tears. “Everybody kind of thought I wasn’t really going to amount to much in my lifetime, in my career.”

How wrong they were.

White also gave a nod to the reality of sports. Except for a rare few, the greatests in their games don’t get to ride away into the sunset holding a trophy, or with a gold medal hanging from their neck.

That didn't make the day bad. In fact, all agreed at the end of this one, that White and the rest of the guys put on one heck of a show.

“Everybody's been asking me what my legacy in this sport has been,” he said as he peered up the now-empty halfpipe, a canvas he once dominated. “And I'm like, ‘You're watching it."