After COVID 'nightmare,' Sanderson joins US at Olympics 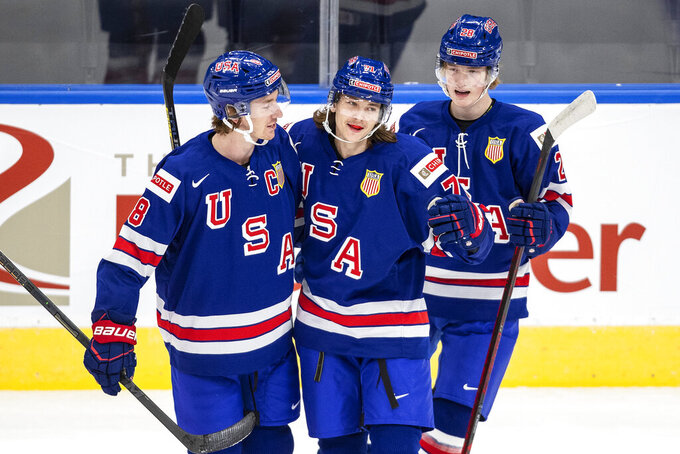 FILE - United States' Jake Sanderson, from left, Tanner Dickinson and Chaz Lucius celebrate a goal against Finland during the first period of an exhibition game in Edmonton, Alberta, Dec. 23, 2021, before the IIHF World Junior Hockey Championship tournament. Sanderson, who plays hockey for the University of North Dakota, was named to the 2022 U.S. Olympic team after the NHL announced it was not sending players to the Olympics. (Jason Franson/The Canadian Press via AP, File)

BEIJING (AP) — Jake Sanderson woke up each morning in Los Angeles and checked his phone to find out his latest test result.

After testing positive for the coronavirus at USA Hockey's pre-Olympic camp, the next four results all came back the same. Finally, Sanderson began testing negative and got the five in a row he needed to travel to China.

The University of North Dakota defenseman passed his test at the airport and skated with his U.S. teammates Friday. After a longer-than-expected stay in LA, Sanderson could play against Canada on Saturday or Germany on Sunday and is ready to move past his “nightmare” and on to hockey.

"I was very disappointed and upset with all of it," Sanderson said. "Just a lot of waiting and a lot of hoping I would get here. ... It was a roller coaster and up and down emotions, but at the end I’m here, and that’s all that matters.”

Sanderson took part in one practice stateside before he tested positive for what he said was the first time. Frustration set in for the 19-year-old while the rest of the U.S. men's hockey team flew to Beijing and he waited out the clock for more than 120 hours to build up enough negative COVID-19 tests.

Physically, he felt fine. Sanderson had no symptoms, so he rode the stationary bike and worked out as much as possible. By the tail end of his time in virus protocol, he was even able to get on the ice a couple of times to keep his conditioning level up.

“It was more mentally grueling for him than physically,” coach David Quinn said. “It’s been a tough stretch for him here. Any time you’re put in the situation he’s in, it’s not fun, for a variety of reasons.”

Sanderson ready Ryan Holiday's “The Daily Stoic” book and a bit of the Bible. He spoke with friends and family, particularly his parents, and tried to stay in good spirits.

His teammates also tried to help in that department. Captain Andy Miele said players were texting Sanderson to check in and ask how he was doing.

“We would text each other every once in a while, and he was hanging in there,” close friend and fellow defenseman Brock Faber said. “He kept his hopes up, and obviously it worked out.”

Sanderson said he prayed and had others praying for him to get cleared. He thanked USA Hockey for helping him take care of the necessary steps to make it to the Olympics, a tournament in which he was expected to have a major role.

There's still that chance for the native of Whitefish, Montana, who was the No. 5 overall pick in the 2020 NHL draft by the Ottawa Senators. The knockout round is next week, and the U.S. is much more of a medal threat with an elite, 6-foot-2 puck mover like Sanderson on the blue line.

“You never know in these tournaments what can happen,” Miele said, singling out Sanderson's confidence as an element of his game that stands out. “Someone with that kind of confidence can always jump in and make an impact right away. We’re glad to have him here. His depth his huge for us, so it makes our team that much better.”

Faber expects Sanderson to be ready to go right away. Even if the coaching staff eases Sanderson back into the fast pace of Olympic hockey, he is energized and feeling good about what he can add for the Americans.

“I’m so happy to be out with the guys, and that’s just a boost of energy in itself,” Sanderson said. “I’m going to make the most of my opportunity.”