After the crash, Emily Sweeney back on luge's Olympic stage 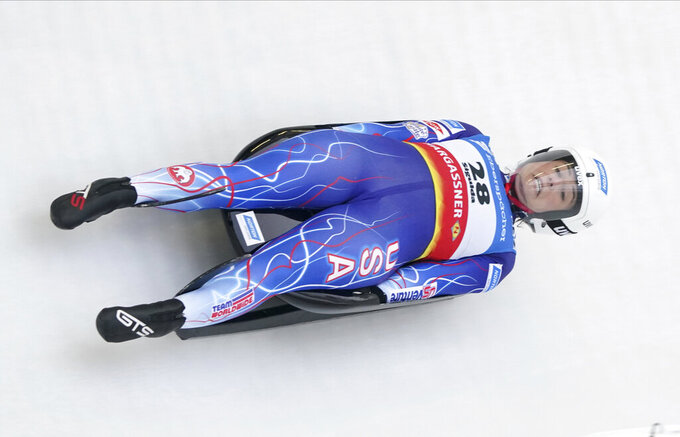 BEIJING (AP) — It has come up in conversations for four years. The Crash. USA Luge’s Emily Sweeney has had hundreds of them in her sliding career, yet there’s only one that people want to talk about.

Such is what happens after somebody breaks their neck and their back at the Olympics.

Now four years removed from the scare of her life, Sweeney is back on her sport’s biggest stage. She’s one of the many legitimate medal hopefuls in the women’s luge event at the Beijing Olympics, which begins Monday with the first two of four runs at the Yanqing Sliding Center. There are moments where she still struggles with what happened at the Pyeongchang Games, but over time it has also empowered her in the sense that she’s not only still sliding — but she’s even better now.

“It’s actually kind of freeing to me, feeling like the biggest thing I will be remembered for is already done,” Sweeney said. “And I mean that in a positive way. Yes, it was dramatic and it was intense and everything. But it was so challenging and the magnitude of that challenge, I don’t think I’m going to have that in sport again.”

And what that means is the crash gave her perspective.

There has been no women’s luge race in Olympic history with as many sliders who have realistic chances of medaling as the one that begins Monday. There’s the two-time Olympic women’s champion Natalie Geisenberger of Germany, who has been flying in training this week after struggling at the Yanqing track this fall both on-ice and off. There’s Madeleine Egle of Austria, the World Cup women's singles champion this season. World Cup overall champion Julia Taubitz and her German teammate Anna Berreiter are as good as anyone in the world. Summer Britcher of the United States has a pile of medals in her collection. Sweeney has medaled at the world championships before.

“I think it’s incredibly exciting, this race,” Irish luger and first-time Olympian Elsa Desmond said. “I also don’t remember an Olympics ever being this exciting from the woman’s perspective. ... I think it could be a really interesting race. What we saw here in the World Cup in November, the field was wide open because none of us have any experience here. No one knows this track or has it drilled in the same way we do the other ones.”

That means, quite simply, everyone is sort of on equal footing on the Yanqing track.

If training times are any indicator, Sweeney will have a decent chance to be in the mix. Geisenberger is generally considered the greatest women’s luge competitor ever — and had the fastest time in five of her six training sessions this week. Sweeney, though, had starts that were nearly identical to the Olympic champ; Geisenberger’s average was 7.247 seconds, Sweeney’s was 7.257 seconds.

In the weeks that followed the broken back and broken neck in South Korea, the notion that Sweeney would be in this spot might have been farfetched. Not anymore.

“I don’t even know if I’m past it,” Sweeney said. “There’s still moments where the what-ifs come into mind. But I’m not just here. I’m competitive. I’m more competitive than I’ve ever been. My starts are stronger than they’ve ever been. So, I didn’t just do it. I feel like I did it well.”

There have been tons of challenges along the way.

Go back to 2010, when she lost a spot on the Olympic team by losing a raceoff to Megan Sweeney — her sister. Go back to 2014, when injuries kept her from qualifying for the Sochi Games. The neck and back still hurt from time to time thanks to the 2018 crash.

There's much more. Sweeney’s longtime partner is Italian luge star Dominik Fischnaller; they couldn’t see each other for months after the pandemic hit because of international travel restrictions. Last season, USA Luge missed half of the World Cup slate because of travel issues; this season, Sweeney, a soldier in the U.S. Army, had to miss two World Cups in Russia because of military restrictions about travel there. And if all that wasn’t enough, her sled got held up in China for weeks because of customs issues after training sessions this fall.

“There were a lot of moments where I could have walked away, and I didn’t,” Sweeney said. “I chose to stick it out. I’m just proud to be here and I’m proud of everything I’ve gone through.”

Turns out, the crash showed her that she can handle anything.

The crash at the 2018 Olympics left a stunned silence over the Alpensia Sliding Center. Sweeney wobbled off-line in the track’s most treacherous spot, unsuccessfully trying to slow down and regain control. She was careening wildly, side-to-side, knowing impact was coming. The first hit was feet-first into the lip atop the track, the second was when she ricocheted down the slope of the wall and smashed the base of her neck into more ice-covered concrete. She was thrown off her sled at probably close to 75 mph and her body skidded down the ice to a stop.

“I’m fine,” she insisted that night.

She absolutely wasn’t then. She is now.

The realization hit her only a few days ago. She made it back. She was on a bus going to the top of the Yanqing track, realizing that all she could see in just about any direction was the Olympic rings.

“That’s when it just kind of hit me that I’m really proud of myself,” Sweeney said. “And I don’t think I feel that way often. I’m lucky. I have a lot of people who support me, and they tell me they’re proud of me, a lot. But I always felt like it was for things that you were supposed to do, and you didn’t really earn it. I felt that way. But this is the first thing that I’ve done that I know I chose to do, over and over, when it was hard. And I’m really proud of myself.”