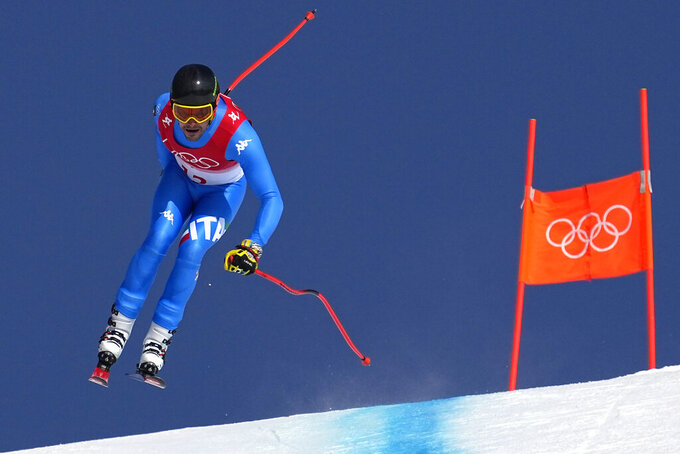 Christof Innerhofer, of Italy makes a jump during the downhill part of the men's combined at the 2022 Winter Olympics, Thursday, Feb. 10, 2022, in the Yanqing district of Beijing. (AP Photo/Robert F. Bukaty)

BEIJING (AP) — Here is one measure of just how out-of-favor the Alpine combined, contested Thursday at the Beijing Olympics, has become in ski racing: A total of only 27 athletes took part.

That's less than half as many as the 65 at the 2018 Pyeongchang Games, and quite a bit fewer than the 43 for the downhill and 47 for the super-G earlier this week.

Here's another: For the first time in Olympic history, no American men entered the event.

And one more: It is not being held even once during the current World Cup season.

All of which helps explain why there is talk of saying goodbye to the combined at the Winter Games, even though back when ski racing made its Olympic debut in 1936, it was the only event on the schedule. Only later were the downhill, slalom, giant slalom and super-G added.

“We don’t know for sure whether it’ll be around next year,” said Christof Innerhofer, a 37-year-old Italian who won a bronze in the combined at the 2014 Sochi Games and was 10th on Thursday. “It would be nice if I got to participate in the last one.”

That sort of sentiment was common among those competing Thursday on the manufactured snow at the Yanqing Alpine Skiing Center (which hosts what perhaps will be the last Olympic women’s combined next Thursday).

“I kept saying it would be pretty cool to win the last ever one,” said Jack Crawford, the Canadian whose combined times — see how they came up with the event's name? — from a downhill run in the morning and a slalom run in the afternoon left him in third place behind Austrian skier Johannes Strolz and needing to settle for possibly being the last man with a bronze.

One person unwilling to concede outright that this will be it for the discipline was Johan Eliasch, president of the International Ski Federation (FIS) since June. He was not definitive about anything, saying the issues still need to be studied and decisions need to be considered.

Asked after watching the slalom run whether that was the last combined at a Winter Olympics, Eliasch responded: “I hope not.”

“It goes without saying,” he acknowledged, “that things must be improved.”

It turns out the combined’s greatest appeal is also its biggest problem.

Because it requires one speed run and one technical run, some praise the event as the best test of versatility in the sport.

That sort of widespread skill set is also rarer and rarer, so there just are not many skiers left who are capable of performing well in both a downhill and a slalom. One example: Silver medalist Aleksander Aamodt Kilde of Norway said he hadn’t even practiced, let alone raced, a slalom in two years before Thursday.

“I mean, the combined was the core of what it meant to be a ski racer before me. And honestly, through a lot of my career, it was important to me. So it would be a shame to see it go away,” said Bode Miller, who won a silver in the combined at the 2002 Salt Lake City Olympics and a gold at the Vancouver Games in 2010, four years after Ted Ligety gave the U.S. gold, too. “We’ve seen specialization dominate every sport over the last, whatever, 20-30 years, so it’s not shocking. There’s not really four-event skiers anymore in a serious way, the way there was prior to my career and the way that I did it.”

Miller made the point that FIS needs to do whatever it can to better promote Alpine skiing and attract new fans, and so if for some reason that means getting rid of combined, well, so be it.

Neither FIS nor any of its athletes wants give up medal events at the Olympics, of course.

So one school of thought is that the combined could be replaced by a parallel event in which two skiers race each other head-to-head, instead of going down the hill one at a time. That would be another addition to the Winter Games; a mixed team event joined in 2018 and is back in 2022.

“I like the combined better than a team race,” Innerhofer said. “A team race makes no sense.”

OK, well, how about the parallel format?

“Eh, I don’t like that one, either,” he said. “How many parallels have you seen that were really fair? None.”