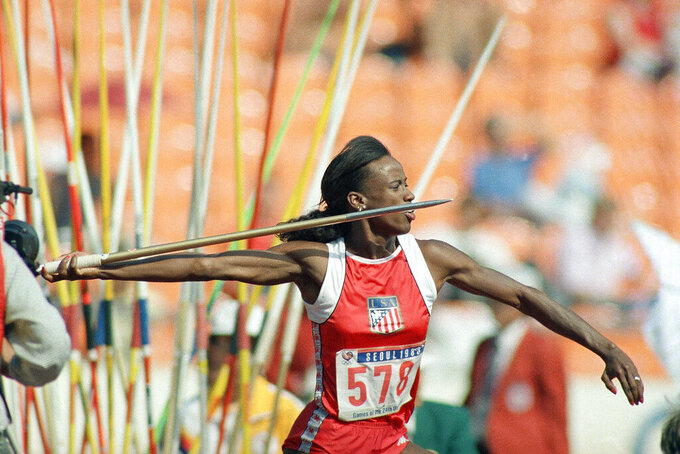 EDITORS — With the Tokyo Olympics postponed for a year because of the coronavirus pandemic, The Associated Press is looking back at the history of Summer Games. This story was published in The Clarksdale Press Register (Miss.) on Oct. 3, 1988. The story, a review of the major developments at the Seoul Games as it ended, is reprinted here as it ran using the contemporary style, terminology and including any published errors.

SEOUL, South Korea -- A Korean boxer who knew he didn’t deserve his gold raised the hand of an American who felt cheated, and with that noble gesture of sportsmanship ended an Olympics that will be remembered, sadly, for its scandals.

These Games overcame the fear of terrorism and civil unrest and brought together nearly 10,000 athletes from 160 countries in stadiums, arenas and pools as fine as ever seen.

The Soviets reigned again with 55 golds, followed by East Germany’s 37 and the United States’ 36. Host South Korea rose to No. 1 in Asia, and fourth in the world with 12 golds.

As always, though, the medals meant much less than the memories the athletes and fans took away with them.

There were glorious moments, from an opening ceremony with exotic dancers and parachutists to a closing with hugs and tears, fireworks and dances, and the mascots of Seoul and Barcelona, the site of the 1992 Games, floating together into the starry night.

Yet, the highest moment of the Games - Ben Johnson rocketing to victory over Lewis in a 100-meter dash world record - led to the deepest pain when the Canadian was caught cheating with muscle-building anabolic steroids.

Twenty years from now, when most of the records set in Seoul are broken, the impact of Johnson’s disgrace will still be felt if athletes and trainers heed the events here and end doping.

“There have been high points and some low points, and the most important low point was Ben Johnson,” Juan Antonio Samaranch, president of the International Olympic Committee, said Monday. “That was indeed a blow.”

Catching Johnson, however, and expelling him along with nine other athletes with positive drug tests was an indication, Samaranch said, that “we have won the battle against doping.”

Lessons for the future also could be learned from the strange and appalling things that went on at the boxing ring, from an American fighter missing his bus and his bout, to Korean coaches pummeling a referee, and judges losing sight of honesty.

Three golds, three silvers and two bronzes were quite a haul for the U.S. boxers, but they weren’t enough to wipe out the bitterness of a decision Sunday against 19-year-old Roy Jones in the 156-pound final against Korea’s Park Si-hun.

Jones peppered Park’s face with rights and left hooks for three rounds, forced him to one standing 8-count and could have gotten three others that would have ended the fight in the ring. Instead, the decision went to the judges and the result was astonishing - to the fighters, the coaches and even to many Koreans.

The Soviet and Hungarian judges scored it 60-56, a huge spread, in favor of Jones. The judges from Uruguay and Morocco scored it 59-58 for Park, and the judge from Uganda had it 59-59, with a plus mark for the Korean that gave him the gold.

On the victory platform, the gold around Park’s neck and the silver on Jones’, the Korean raised the American’s hand for the crowd. Here, the gesture said, is the real winner.

“I thought I lost the fight,” Park said. “I might have won the gold medal thanks to the advantage of a home ring.”

Jones, little soothed by his award afterward from the International Amateur Boxing Association as the outstanding fighter of the tournament, charged the judges with robbing him of his gold and his dream and said he was giving up plans for a professional career.

Samaranch said Monday the IOC will study whether boxing should be continued in the Olympics because of the hazards in the sport and the problems of officiating.

“We are really not happy with the way judges and officials are acting,” he said. “We take the problem very seriously.”

A much more serious problem for the United States - a rising tide of anti-American sentiment - was exacerbated at the Games by the coverage of NBC, the arrest of several American athletes and the perceived rudeness of the U.S. team at the opening ceremony.

The Soviets, meanwhile, cultivated friendship by bringing in the Bolshoi Ballet, the Moscow Philharmonic, films, a photo exhibit and copies of the Communist Party newspaper Pravda.

The announcement of an unprecedented sports exchange program between South Korea and the Soviet Union and the arrival of the first Soviet diplomats since World War II also warmed relations.

Soviet athletes, as they did in Calgary during the Winter Games, made a special effort to meet with local people. American athletes tended to isolate themselves.

All those differences became apparent at the sporting events, where Koreans often cheered louder for the Soviets or East Germans than they did for Americans, despite a close 40-year relationship with the United States.

The ongoing student protests, aimed in part at kicking out the 42,000 U.S. troops in South Korea, never threatened the Olympics and didn’t gain more support during the Games, but they showed a darker side of the feelings expressed in the arenas.

NBC left Seoul richer in the pockets but poorer in reputation. Viewers complained about too many commercials and taped features, and frequent shifts from one event to another. In South Korea, the network was accused of anti-Korean reporting and insensitivity to the local culture.

NBC spent $$440 million broadcasting the Games, and a network source said its profits could be as high as $$80 million.

In a whirl of races and scandals and a blur of tears, happy and sad, the Olympics slipped from summer to fall. They were the most expensive and biggest ever.

The Seoul Olympic Organizing Committee says it made a $$349 million profit on the Games. Four years ago, the Los Angeles Games earned a $$225 million profit.

Some athletes left Monday with medals, others with only souvenirs. Some will get rich off these Games, others will struggle.

East German swimmer Kristin Otto, the first woman ever to win six gold medals in one Olympics, received a gold crown from local newspapers Monday as most valuable player of the Seoul Games.

The Paek Sang crown, made of 20-karat gold and designed after the headgear of ancient Korean warriors, cost $$11,000, its donors said. Although it was not an official IOC award, the winner was chosen by a panel of four IOC members.

Greg Louganis’ diving career ended with his second pair of gold medals in the springboard and platform events, and he says he’s off to begin an acting career.

Perhaps his first film should be his own life story, beginning with a troubled youth and teen-age bout with alcoholism and ending with his dives in Seoul after hitting his head on the springboard.

Louganis said he talked with his coach about quitting after hitting the board and opening a cut that needed five stitches to close.

“We walked and discussed all the things we had gone through to get there,” he said. “I decided to stay in, and I’m glad I did.”