Army boxer Naomi Graham fights her way to Olympics for US 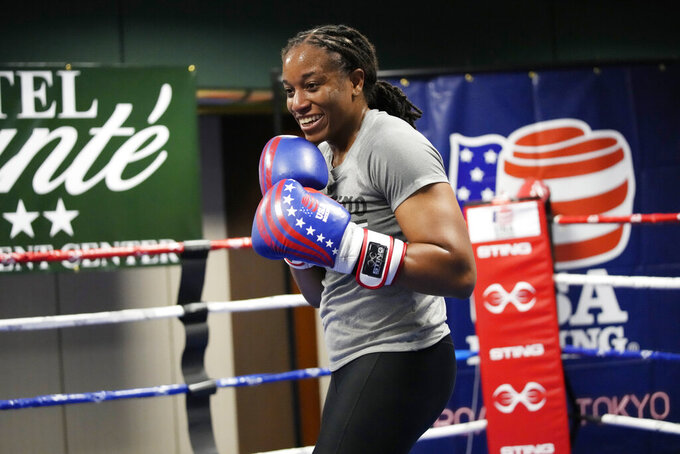 USA Boxing team member Naomi Graham takes part in drills during a media day for the team in Colorado Springs, Colo., Monday, June 7, 2021. Graham has balanced the demands on her time splendidly in the past few years, and she persevered through the Olympic delay caused by the coronavirus pandemic with a focus 10 years in the making. Graham will be the first female active-duty soldier to fight in the Olympics, and she relishes the history she's making. (AP Photo/David Zalubowski)

COLORADO SPRINGS, Colo. (AP) — Claressa Shields is the most successful American amateur boxer of her generation. She dominated the middleweight division at the past two Olympics, overwhelming every opponent and becoming the only U.S. fighter to claim two boxing golds.

With Shields on to her pro careers in boxing and mixed martial arts, the most successful boxing nation in Olympic history needed a replacement for Tokyo at the weight class Shields had dominated ever since women were allowed to fight at the games nine years ago.

Naomi Graham is aware of the importance of being chosen to follow Shields at 75 kilograms in Tokyo, but she's faced bigger pressures in her life. Six years older than Shields, she's a relative newcomer to high-level boxing, only picking it up a decade ago and fighting her way to Olympic contention while also serving in the Army as a staff sergeant and ammunition specialist.

Graham will be the first female active-duty service member to fight for the U.S. at the Olympics, and she relishes the history she's making.

“I feel like a regular person that’s just pursuing my dreams,” Graham said. “And then I have to think, and I’m like, ‘Wow, there really is a lot of people who have tried to do this who haven’t been able to.' I just want to keep inspiring.”

Graham had been fascinated by boxing since her childhood in Fayetteville, North Carolina, but her mother kept her out of the ring even though her six-years-older sister, Rachel Clark, trained in the sport and eventually boxed professionally from 2008 to 2011.

As the baby of six siblings, Graham was protected by her family, and she didn't come back to boxing until after she had wandered through her first few years of early adulthood.

Graham says she was briefly homeless as she struggled to find her place in the world, living in an abandoned house or on friends' couches. But she is from a military family, and Graham signed up in 2013, saying she “just wanted to serve my country.”

“Naomi really proves that with hard work, anything is possible,” USA Boxing head coach Billy Walsh said. “She’s had some setbacks and troubles in her life, and she overcame it and made things better. She made something of herself, and not just in boxing.”

Another turning point in Graham's life arrived a year earlier when she saw the first Olympic women's boxing tournament on TV from London. Although she already loved the sport, the sight of gold medalists Nicola Adams, Katie Taylor and Shields on the medal stand filled her with even more purpose.

“I always had the dream, but before (2012), women couldn't dream of going to the Olympics,” Graham said. “I always wanted to go to the top and be a world champion, but when I saw those Olympics, I saw that must be a pretty great feeling. I just knew I wanted to do it, too.”

She was sent to Fort Carson, Colorado, and she realized her boxing ambitions could be fostered there. In 2015, she joined the Army’s World Class Athlete Program, which provides training resources to keep soldiers' competitive skills sharp while handling their military obligations.

“The military teaches you to be adaptable in any situation, and I believe I take that into the ring,” Graham said. “Because any style I see, I immediately adapt as soon as I see something that needs to be adjusted.”

Graham went to the Olympic trials in 2016 after having just 10 official fights, but Shields was cruising toward Rio with skills unmatched in the sport. Shields' departure for pro boxing cleared a path in 2017, and Graham has steadily fought her way to international prominence.

Graham might not have all of Shields' pure power — to be fair, nobody does — but she's a disciplined fighter with a metronomic jab that can win amateur bouts all by itself. She fought well at the 2019 Pan-Am Games — and even had her silver medal upgraded to gold after her opponent, Colombia's Jessica Caicedo, was punished for doping — in one of the final major amateur events before the coronavirus pandemic grinded the sport to a halt.

Graham was ninth in the IOC Boxing Task Force's middleweight rankings issued last month, but the Tokyo tournament won't reflect the current state of the sport because of the pandemic. Fighters from the Americas didn't even get a qualifying tournament, where Graham had hoped to build on her Pan-Ams success.

Although much Olympic success depends on the draw, Graham clearly has the potential to extend the U.S. dominance at middleweight to nearly a decade.

“I don't discount our chances for gold medals with any of our women, but (Graham) is going to show some things to a lot of people," Walsh said. "She really shows what you can do with hard work and determination.”