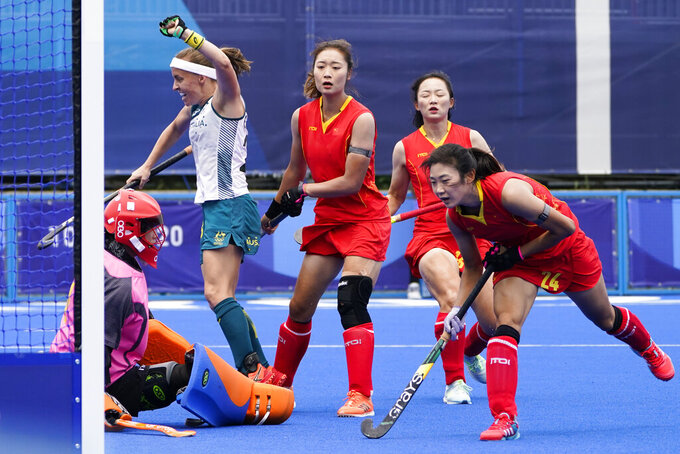 TOKYO (AP) — Australia has the look of a gold medal contender in women’s field hockey.

The Hockeyroos rolled past China 6-0 on Monday to improve to 2-0 in Group B pool play. Australia has outscored its first two Olympic opponents 9-1.

“Our team is in such a good place, and if we’re putting a bit of fear in teams’ eyes watching this game, I think it’s all credit to our team and where we are at,” she said.

Monday's effort was a follow-up to a 3-1 win over Spain on Sunday. Australia coach Katrina Powell did not expect the level of dominance against China.

“I definitely didn’t see that coming,” she said. “Definitely asked the girls to build on yesterday’s performance, which they probably eclipsed. But, yeah, really pleasing.”

The Netherlands, No. 1 in the FIH world rankings by a healthy margin, defeated Ireland 4-0 on Monday to improve to 2-0 in Group A. The Dutch have outscored their first two opponents by the same 9-1 margin as Australia.

But Australia was the more dominant team on Monday, making six of 13 field goals. The win over China could have been much more lopsided — the Hockeyroos missed all five of their penalty corner shots.

“It got to the point where it looked a bit easy because we overran them,” Powell said. “It never starts that way. It might end that way, which it did, and it’s a good result for our goal difference.”

“It’s great,” Malone said. “Most of our goals have come from great team build up, and it’s lots of back-post touches and things like that. There hasn’t been too much outright someone going themselves and doing it for our team, it’s kind of like everyone building up the play and we’re all kind of getting the goals together.”